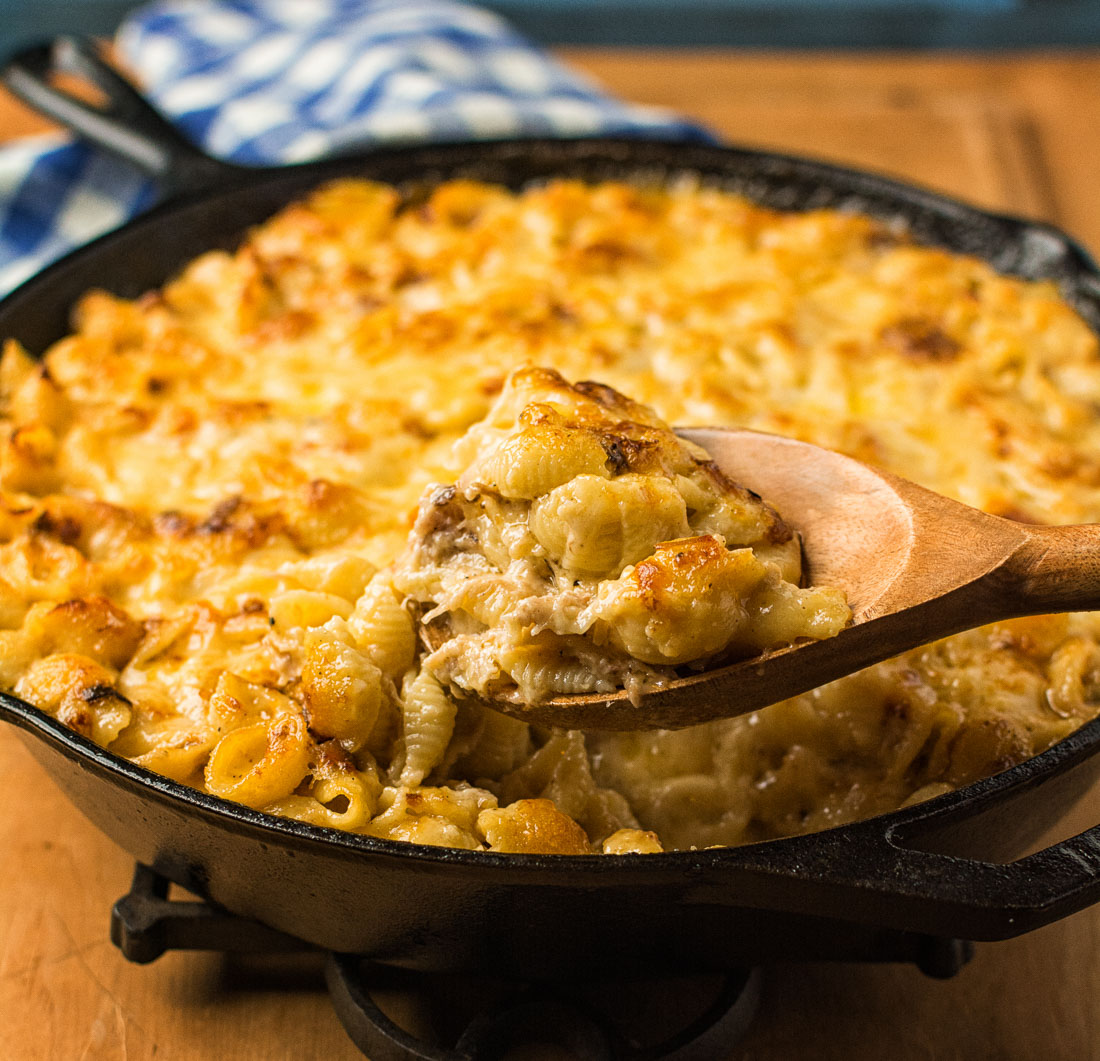 This mac and cheese is so good it will outshine your lovingly prepared mains. It’s a star attraction. I know. I’ve done it to myself. More than once.

This is one of those recipes that you have to be careful with. It’s good. Very good. Crazy good.

But it can be a secret weapon as well. Imagine you are going to a pot luck and you want to be the one that blows everyone away.

This is a dish that can do it. The ultimate sleeper side. Killer mac and cheese. Absolutely killer.

One mac and cheese to rule them all

I know this sounds like a pretty tall claim. It’s mac and cheese after all.

You’re thinking – “Mine is pretty damn good. Why would I bother? Everyone loves mine”.

Maybe that’s true but has anyone ever begged you to serve leftovers for breakfast? I have.

“Forget bacon and eggs. Not interested in lox and cream cheese. We want the mac and cheese”.

Gruyere and cheddar make it special

It’s somewhere between a regular mac and cheese and lasagna.

There’s no bread crumbs. There’s no tomato. And there’s no pinch of this and touch of that. It’s about cheese and pasta.

The complexity comes from the gruyere and cheddar. And there’s cheese melted on top. Just because that’s better.

If you want to go absolutely crazy add pulled pork. You don’t have to. But that adds a whole extra layer of wow. Real pulled pork though. Not the slow cooker stuff.

It’s pretty easy to make as well. Cook your pasta al dente. Make a béchamel. Melt the cheese into it. Add the pasta. Top with more cheese. Bake. Let stand. Serve. Bask in adulation from everyone who tries it.

This is not health food. It’s not food for when you are watching your weight.

This is going for gold. Win at all costs. Sinful. But every now and then sinful is OK. Life is too short for bad food.

This is mac and cheese for when you want to impress.  It’s not any harder to make than any other mac and cheese. But it’s really, really good.
Course side
Cuisine American
Prep Time 20 minutes
Cook Time 50 minutes
Total Time 1 hour 10 minutes
Servings 12
Calories 415kcal
Author glebekitchen

The pulled pork puts this over the top but even without this recipe is a show stealer so don’t think it’s critical. What is important is you use smoked pork without the sauce. This isn’t a place for slow cooker drowned in sauce “pulled pork”. If that’s what you have I think it would be better without.

29 thoughts on “killer mac and cheese”