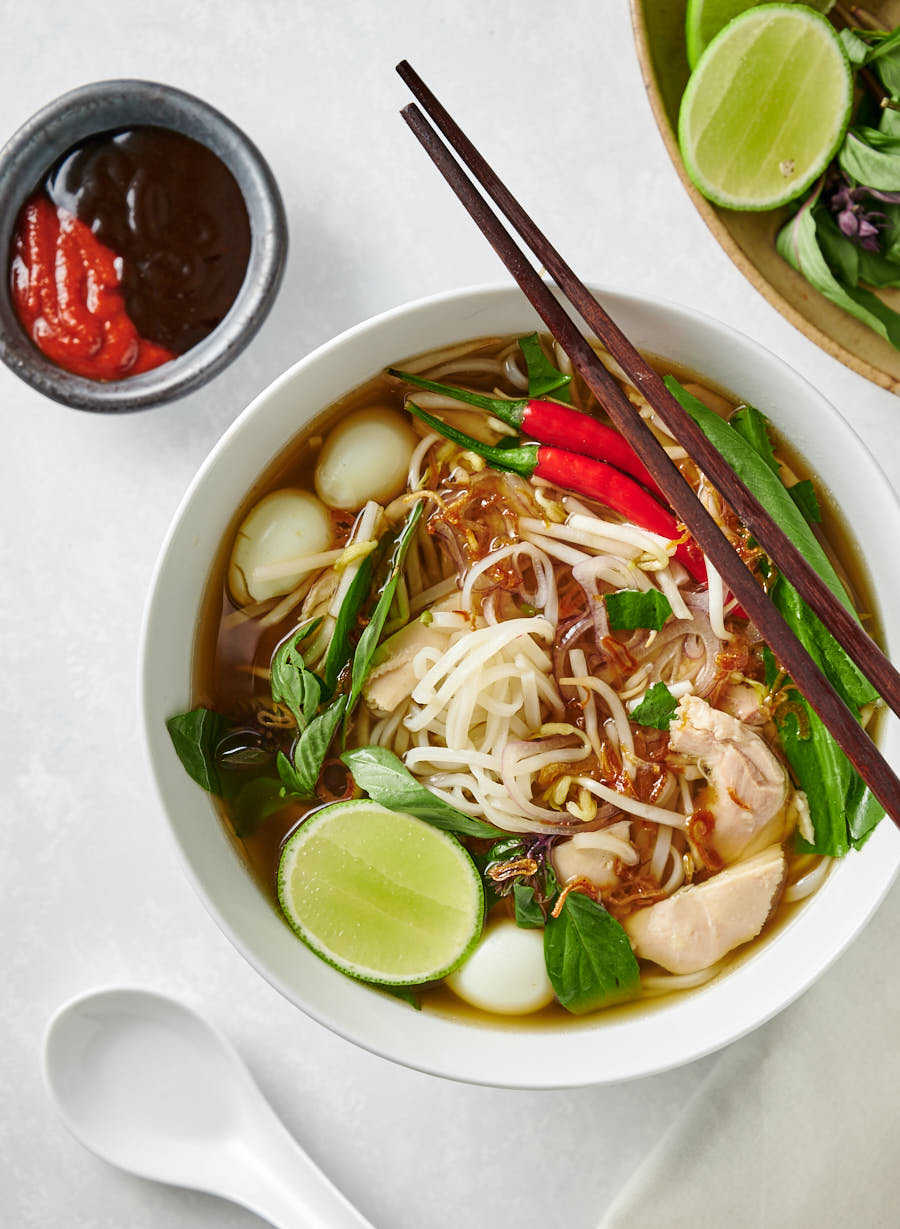 Authentic pho ga takes some time. Takes some attention to detail. But it’s worth it. This is one of the world’s greatest chicken noodle soups.

I read the Lucky Peach Pho issue cover to cover. That’s 160 pages dedicated to pho. The definitive pho manifesto. As far as I know, anyway.

This recipe is based on the Lucky Peach recipe. It has some glebekitchen embellishments but it’s in the ballpark. 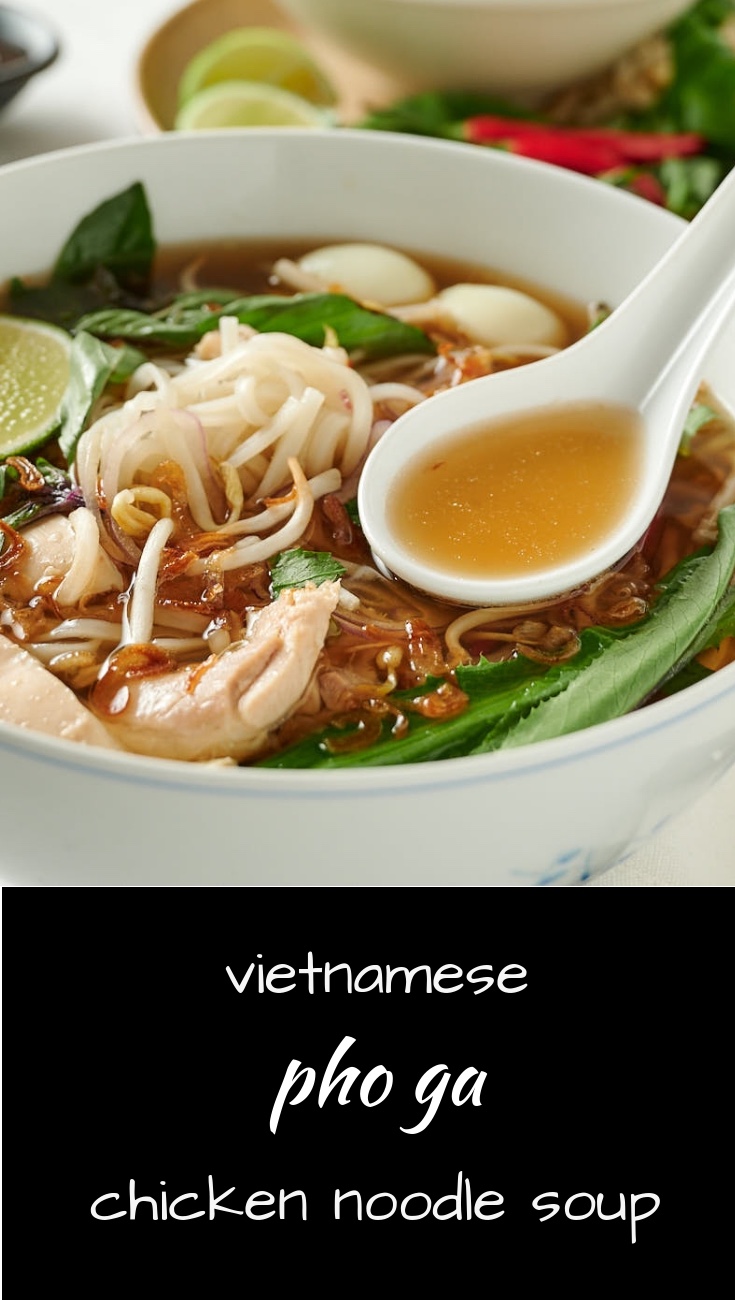 I’ve also read about 100 recipes online. Some are more authentic than others. Some have me wondering if the author has ever eaten pho.

Are you getting that I am a pho addict yet? 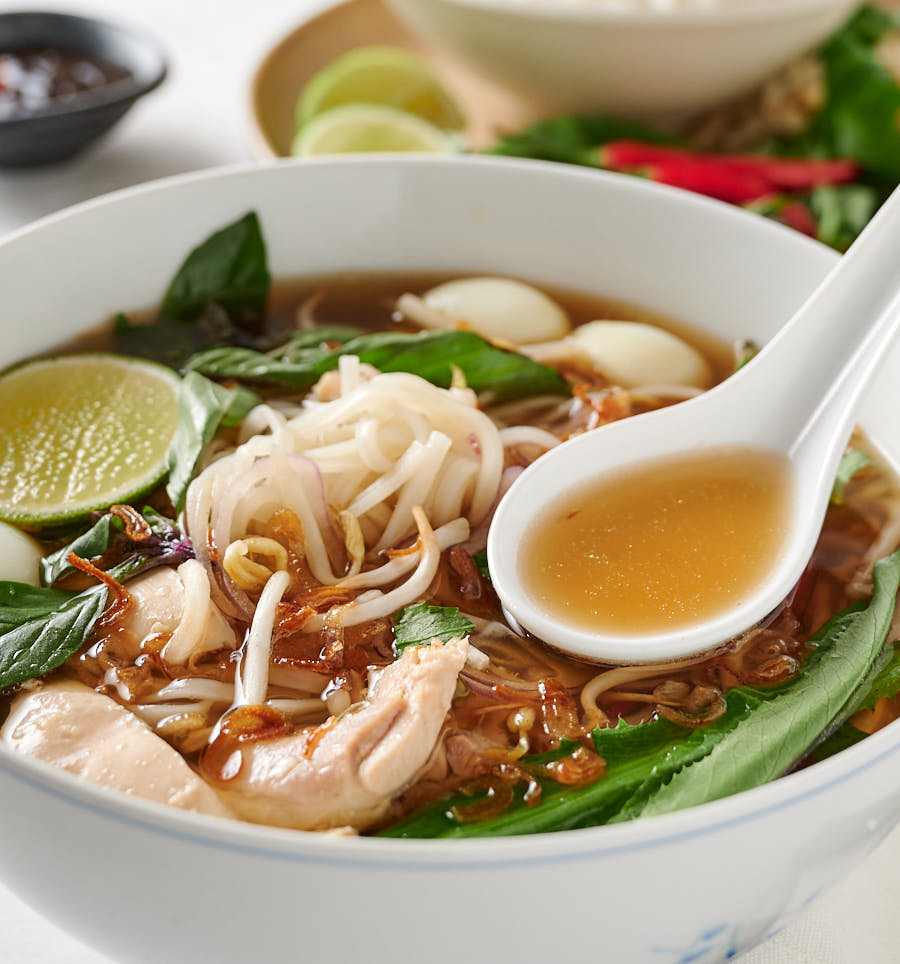 This is chicken soup. So the broth matters. It matters a lot. This isn’t the place to use some stock out of a tetra pack and hope it works. You could start with store bought. But you need to take it to the next level.

Double down. And then double down again. Start with stock. Poach a chicken in it. That’s double down. Flavour from the chicken cooking.

Then you remove the meat from that chicken and make stock using the carcass. Double down again. See where I’m going. This is triple stock. That’s where the flavour comes from. That’s where you need to start when you’re making pho ga. 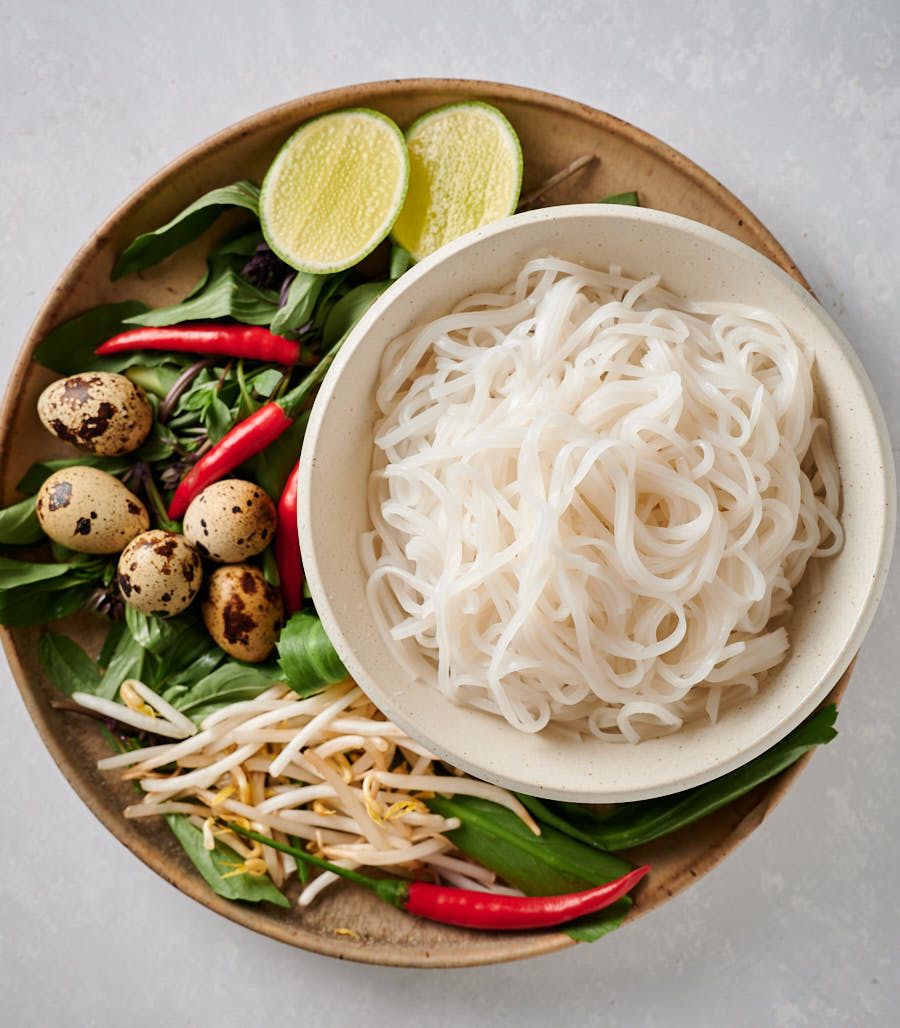 If you like the pho they serve in restaurants you like fish sauce. It’s sounds bad. It doesn’t smell great. But fish is the backbone of south-east Asian cooking.

And once it’s in the dish it makes everything better. Don’t understand it myself but it never seems to fail. You couldn’t pay me to drink it out of the bottle.

But you couldn’t pay me to leave it out of a recipe either. I have been known to say fish sauce makes everything better. It’s perplexing. Don’t know what else to say about it. 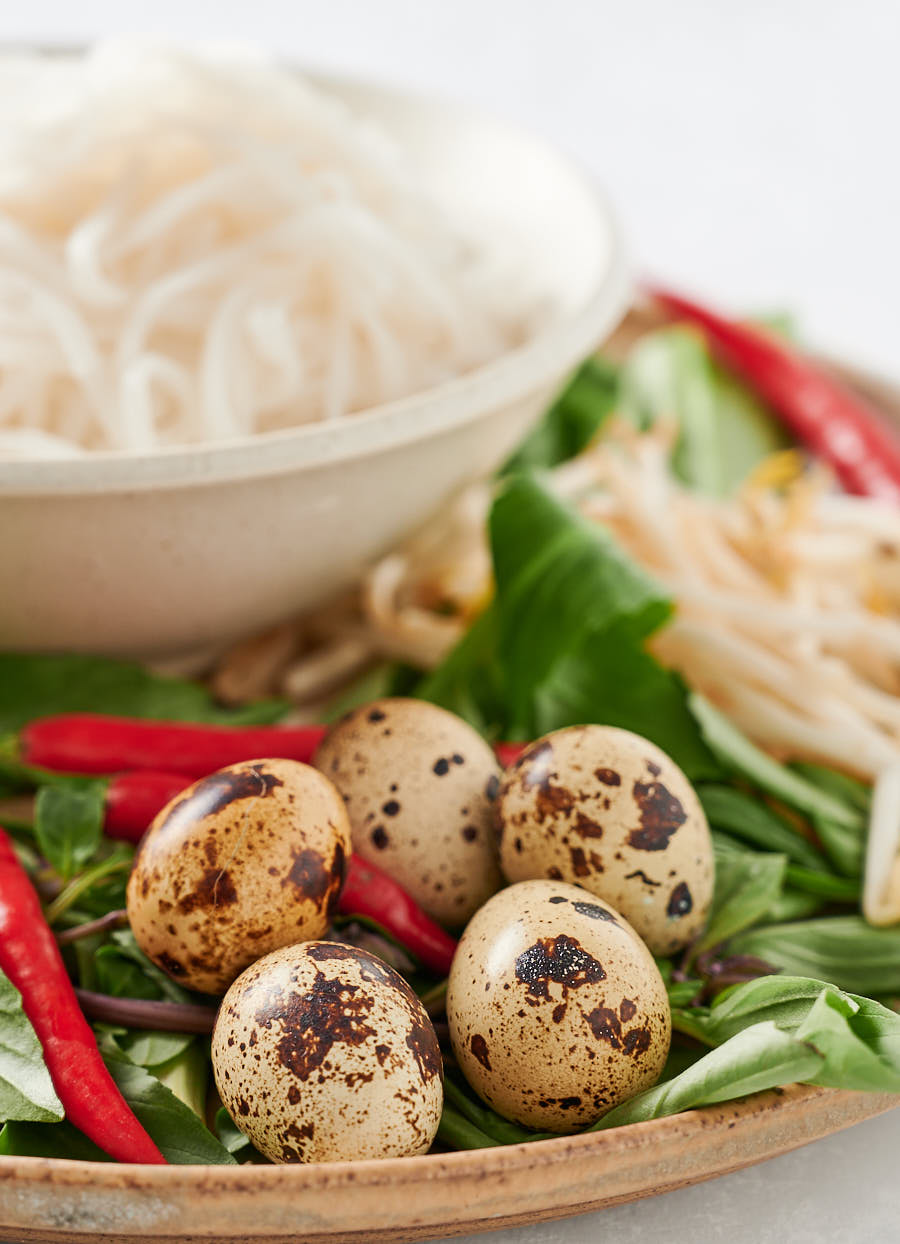 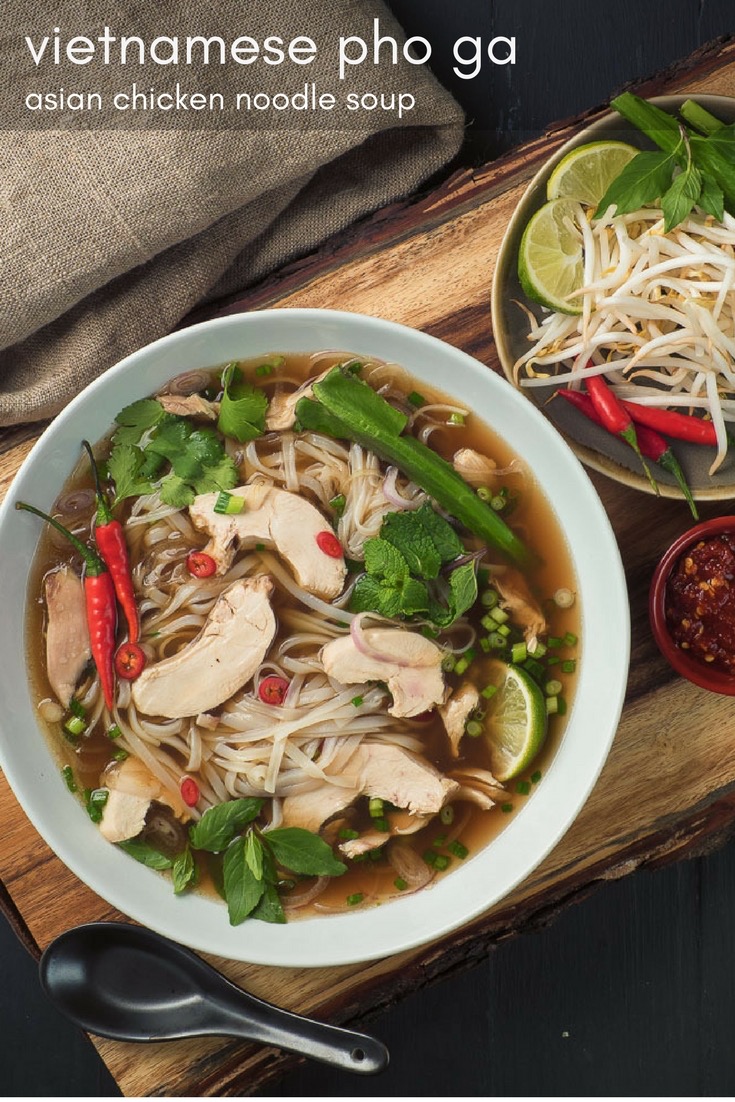 I don’t think this is a thing. At least I’ve never seen it. But I like it. So I do it. Medium soft boiled quail eggs. Like a little surprise bite of delicious mixed in.

You can’t do this with chicken eggs. They are too bit. The idea here is to have a complete egg. Not hardboiled. Eat in in one bite. This crazy soft boiled egg thing going on in your mouth. Try it.

Easy to make. Bring water to a boil. Drop your quail eggs in gently. Simmer for exactly two and a half minutes. Drop them into an ice bath to stop them cooking longer. Set aside.

Peel just before you serve. Drop a couple into the bowl of pho ga. The little things make the difference.

The other little trick I like is a sprinkle of fried shallots. I got that idea from a little Vietnamese joint here in town. It adds a little extra flavour. Like there wasn’t enough here already… 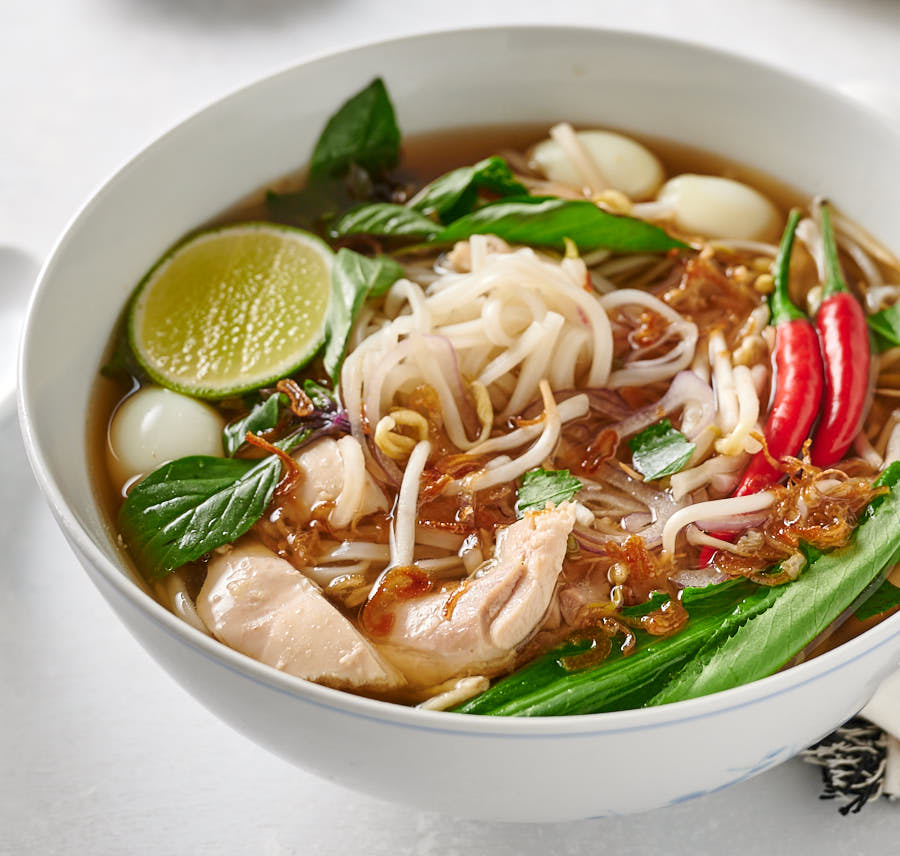 Restaurants have one extra ingredient in their Saigon style pho ga

The one big difference between this recipe and what you get in restaurants is MSG. Saigon style pho is loaded with it. I won’t pretend it’s better without it. It’s not. It’s close but MSG just seems to take it over the top.

I don’t cook with it so I left it out. If you do, by all means add it in. Just cut back on the salt. Your pho will taste better for it. I won’t judge. Or argue. I may be be a bit jealous that your pho is better than mine but I can deal with that.

I should have called this “not quite authentic pho ga because there’s no MSG”. That doesn’t roll off the tongue well though. Bad marketing.

But it would have been just exactly true. Try it how you like it. Either way, it’s just Asian comfort in a bowl. Makes me smile every time I make it. 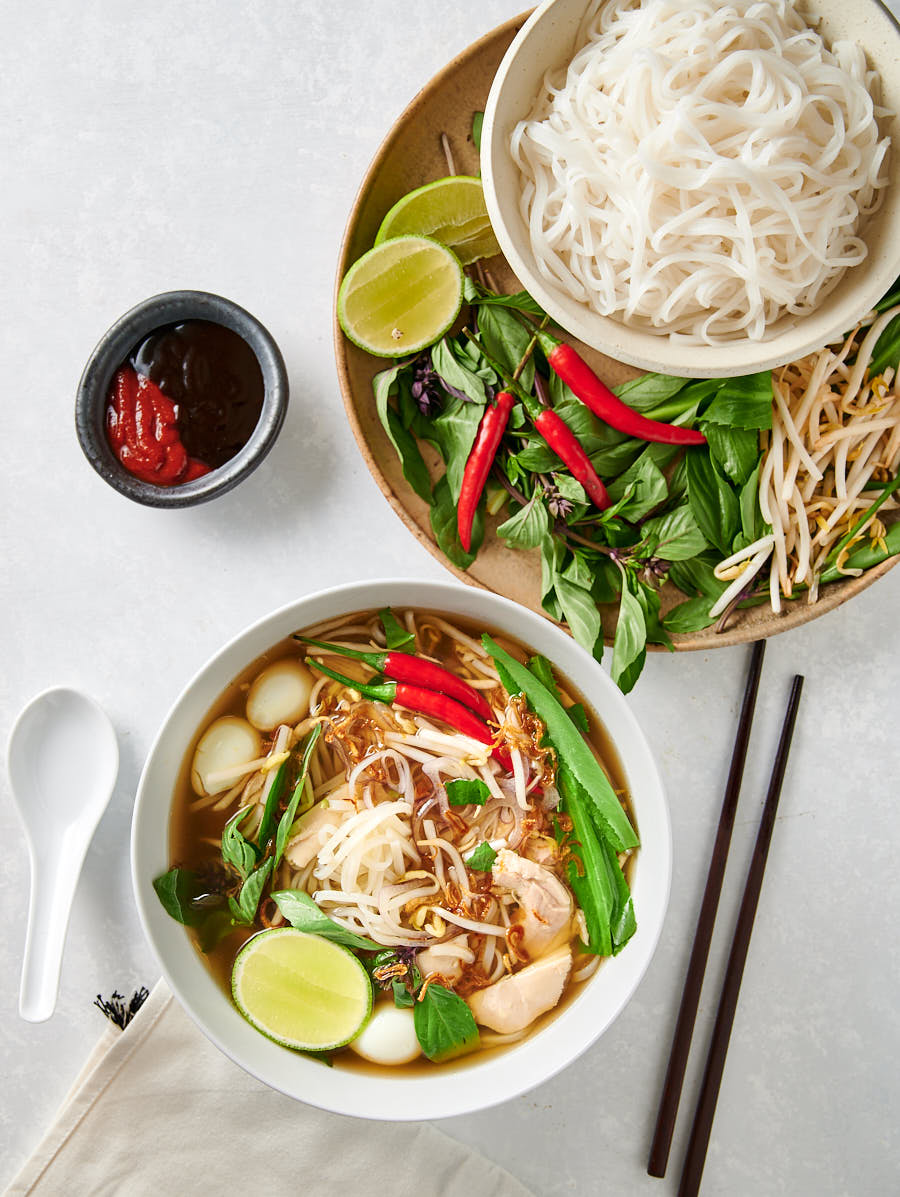 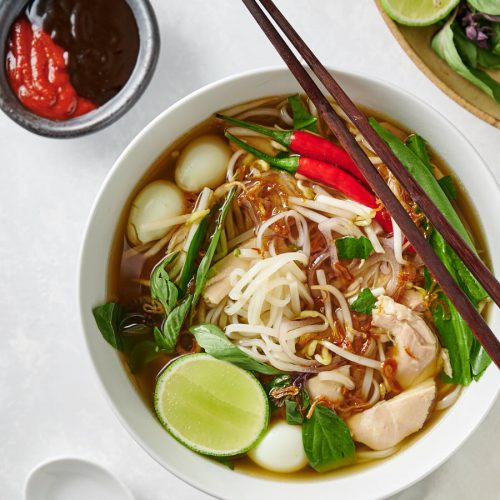 To make medium soft boiled quail eggs bring a pot of water to a boil. Make sure there's enough water to completely cover the eggs. Gently lower the eggs into the water and simmer for exactly 2 1/2 minutes. Transfer immediately to an ice bath to stop the eggs cooking longer. You can buy fried shallots but I make them. Thinly slice the shallots. Heat about an inch and a half of vegetable oil in a pot or wok. Fry the shallots in batches. You want to cook them about 3 minutes. Pull them before they get to the colour you want. They will continue to cook after they come out of the oil. Blot them on a paper towel. Sprinkle with a bit of kosher salt.