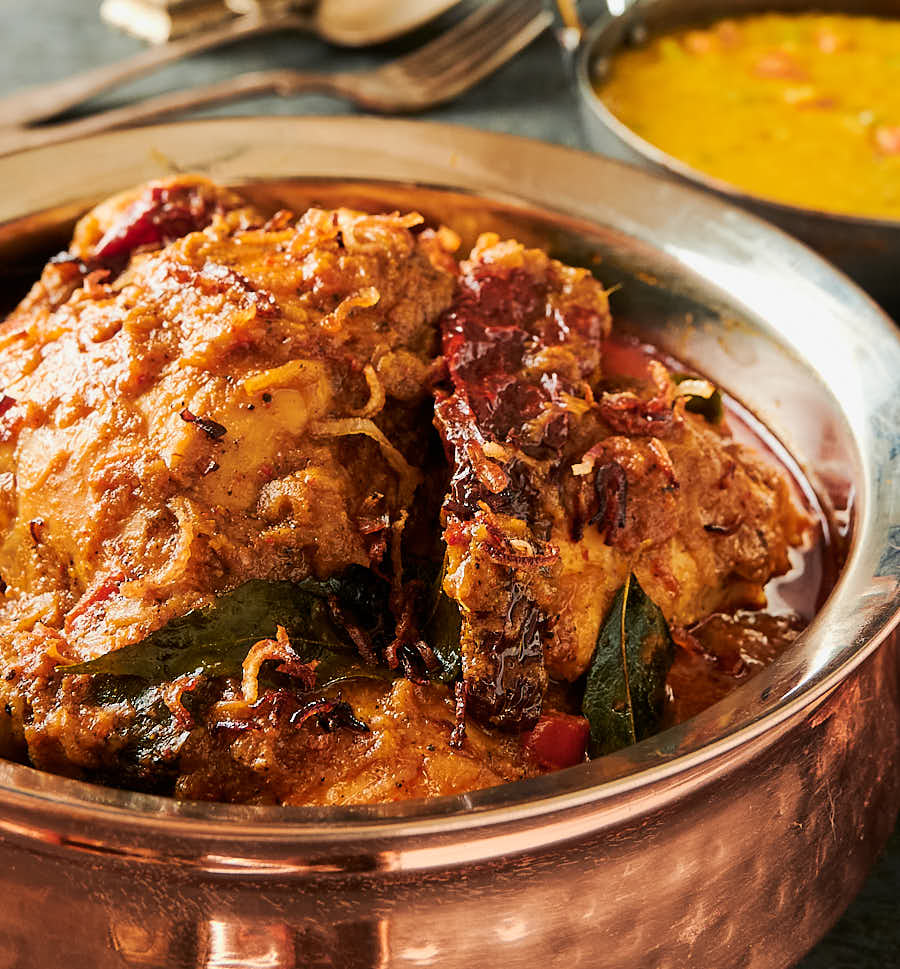 This is traditional Indian cooking. Homestyle. A staff curry if you live in the UK. Doesn’t matter what you call it though. What matters is that it is seriously delicious.

This one is easy. And a crowd pleaser. Scales really well. A little bit exotic. This is not your every day chicken curry.

Those ingredients come together to make some incredible dishes. Flavours you don’t see in restaurants around the world. Which is just a shame. Makes me a little crazy.

There are nearly a billion people in India. With millennia of culinary history. Do you think they all eat the same 20 things you see on an Indian restaurant menu?

They don’t settle. Why should you? It’s a formula. And I don’t understand why. One of the most diverse regional cuisines in the world.

And somehow it all comes down to the same 20 dishes. Over. And over. And over. The fault doesn’t just lie with the restaurants. People eat it up.

It’s self-fulfilling. But I think it can be fixed. There are some south Indian restaurants popping up. And some funky Indianish places as well. So it’s changing. But so slowly.

So maybe make chettinad chicken curry? It’s not hard. And then decide for yourself.

If you love it go to your local Indian restaurant. Ask them why they don’t have it on the menu. Maybe together we can help the industry understand the world is ready.

I can dream anyway. And wait. Someday Indian restaurants are going to rock the world…

This is an old recipe. Updated. From the early days of glebekitchen. I’ve had a while to tinker with this one.

For reasons that escape me completely I tried to keep things a little simpler in the early days. As easy as I could anyway.

I made the chettinad masala optional. Gave people an easier substitute. I said you could leave out the curry leaves even. In my defence I did say it would not be the same.

That changes today. Chettinad masala is not optional. I’ve deleted any mention of substitutes. Curry leaves are mandatory. I am now guilty of revisionist history.

I’ll live with the guilt. My cross to bear. But this is glebekitchen. It’s never about easy. Flavour first. Always.

Chettinad masala is a flavour sledgehammer

Chettinad masala is my kind of spice mix. Don’t read too much into the name though. Masala just means spice mix. Like garam masala or tandoori masala.

There are 17.3 million masalas. Don’t believe me? Visit an Indian grocer. You’ll see. That wall of little boxes of spice mixes. That’s the shrine of masala.

You can use a pre-made masala. But it won’t be the same. This one has the power of freshly ground. And that really is major mojo.

Toasted and freshly ground. I can’t explain how much of a difference that makes. You’ll know when you taste it.

Curry leaves are important too

Curry leaves are an herb. They grow on a tree with a name that’s too hard to pronounce. So I’m just going to call it the magic tree. The magic flavour tree.

They aren’t like anything else. Not that I’ve ever tasted. They are the defining ingredient in this recipe. So not optional.

Fresh is best. By far. Frozen is a distant second. I’ve made this with frozen curry leaves. Was not happy.

Before you ask. Dried isn’t even worth mentioning. Might as well add dust. Seriously. Think dried cilantro. See where I’m going?

Onions are the backbone of chettinad chicken curry. Not a shocker. Onions are key to almost all styles of Indian cooking. It’s the approach that changes.

Traditional Indian cooking relies on deeply browned onions. And that defines the flavour.

There’s a lot of real restaurant style Indian recipes on glebekitchen. I really do like it. But it’s not the same beast. Not at all. There is no substitute for taking the time.

Except maybe hotel style. But then you are just browning the onions in a way that allows you to make multiple curries. So really traditional adapted.

When you cook the onions for this recipe think French onion soup. Golden browned. Takes time. Twenty minutes. Probably more. Until they melt into this wonderful mess of goodness. That mess gives the curry its body. And serious flavour.

This is one of those times. There’s something about chettinad chicken curry. The spicing. Slammed up against the flavour of curry leaves.

The bite of black pepper. Balanced by the creaminess of the coconut milk. It just works. In a way I love. In a way I hope you will too.

And if you do, go to your local formula Indian restaurant and demand better. Demand chettinad chicken curry. 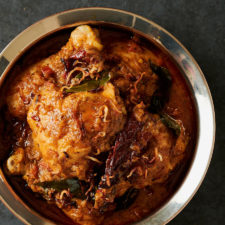 Think about making your own garlic ginger paste. Fresh is so much better…