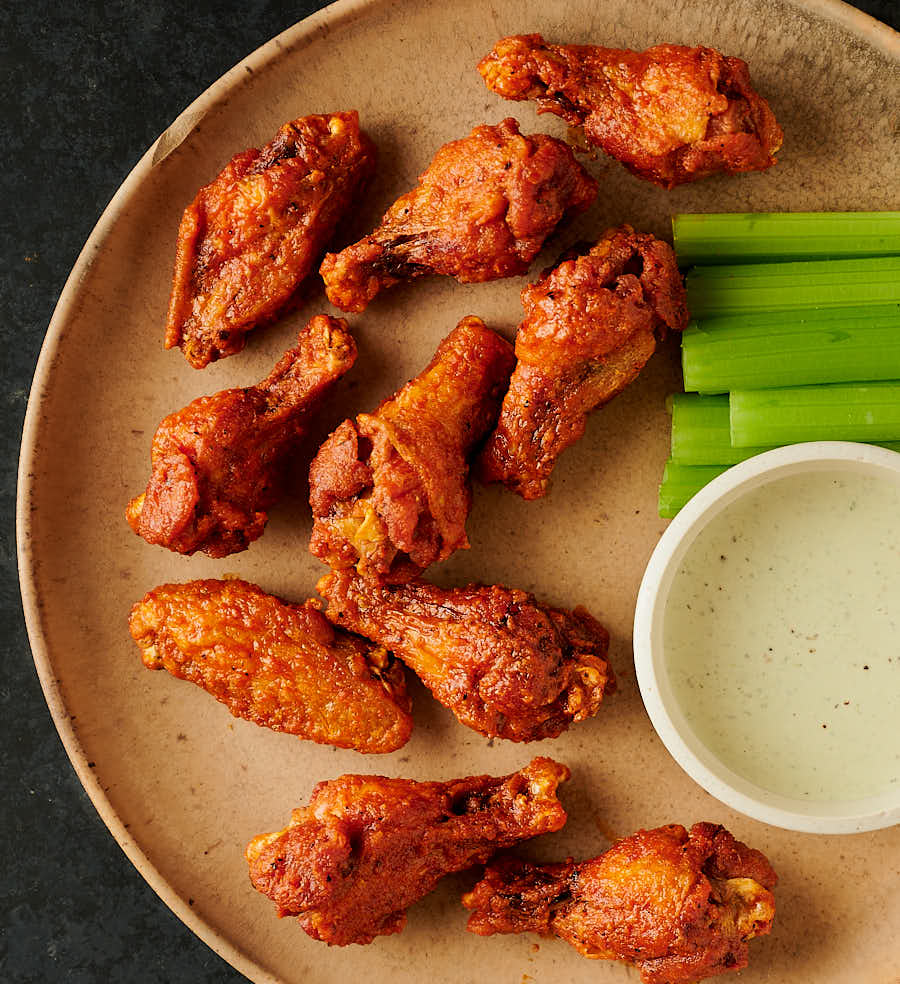 Vindaloo chicken wings. It had to happen. Ultra-crispy wings in a spicy vindaloo inspired sauce. How can you not want that?

Not enough to get your attention? There’s a crazy tasty dipping sauce too. This is just good living.

Stop for a second. Think about it. Chicken wings. Vindaloo. Put those together in your mind. Vindaloo chicken wings. I can’t stop eating them.

This is not Indian. Not fusion either. It’s Indian-ish. Indian inspired. Fun with Indian ingredients. And I’m absolutely loving it.

But if you’re game to walk an extra kilometre or three to balance things out? Read on.

It’s not about a hot sauce

But I did take my cues from it. Hot sauce. Butter. Wings. Dip. That’ll work? Right? And off I went down a path to hell.

Turns out you can’t make a decent hot sauce from powdered spices. At least I can’t. I tried. Read. Thought about it.

And in the end? Epic fail. Don’t try. Waste of time. And ingredients.

Turns out you can’t believe everything on the internet. Shocking. I know. Totally rocked my world too.

The whole concept is fundamentally flawed. Not sure what I was thinking. Why I had hope. Raw spices are terrible. Especially in large quantities.

You can’t magically change fundamentals. No matter how bad you want it. Sad. But true.

I know better. So I have no excuse. I’m pleading temporary insanity. Throwing myself on the mercy of the court.

Turns out it’s obvious. Once you see it. Blooming spices. That’s the key.

Boring. I know. Same as pretty much every Indian recipe on glebekitchen. But if it ain’t broke why fix it?

It’s immutable. It just is. And yet I had to think about it. Embarrassing really…

There is one unsubtle difference though. Butter. Blooming spices in butter.

Not ghee. Butter. Because buffalo chicken wing sauce is about butter. And butter is not the same as ghee.

That flavour is important. A big part of what makes vindaloo chicken wings work in fact.

One important note. Those milk solids can burn. So you need to be careful. Gentle. Low and slow. That’s critical. You need to pay attention. Seriously.

Burn this and you get burnt spiced. And burnt butter. That’s a double whammy of full on seriously not delicious. I know. I did it. Really, really bad.

It’s not hard though. Just mind your pan. Pay attention. Nail this and you get buttery spiced goodness. Perfect for vindaloo chicken wings.

Dare to be different with your dip

There’s an Indian restaurant trick that nobody talks about. For dips. And it’s a good one.

I used to struggle with it. Couldn’t figure it out. My dips just weren’t as good as the ones I was being served. I had to be told. And I’m going to tell you.

Indian dips are about yoghurt. Everybody knows that. Common knowledge. Cooking dogma even. That is a mental trap.

A trap I fell into. Hard. Even when it was on the table in front of me.

Turns out nobody told the better Indian restaurants. The funky ones. So they aren’t constrained. Dogma free zone.

Adds creaminess. Mouth feel. Things you are never going to get from yoghurt. Not ever.

There’s no secret here. Deep fried is best. Grilled over charcoal is really good. But deep fried is king.

What’s better than deep fried? I’m glad I asked. Double deep fried is what. That’s how you get extra crispy wings. Wings that stand up to sauce.

Math or not math there’s food science at work here. Want to go deep? Look into it. Low and slow. Masterclass says initial fry at 275F. A second fry with hot oil. That’s a path to magic.

It’s also the path to explosive decompression. If you aren’t careful. So I’m not going to promote it here. It can be dangerous. Look into it and decide for yourself.

Restaurant kitchens have big deep fry vats. Those vats hold lots of oil. They have big powerful heating elements. So they can fry big batches of wings. I do not have the words to express how jealous I am.

It’s trickier at home. Home deep fryers are small. Woks on a stovetop are really small. Four litres of oil is not that much.

It takes about 10 minutes to fry wings. And you can fry about 10 wings per batch in four litres of oil. That’s not a lot of wings. Especially if you are trying to feed a bunch of people.

The double fry fixes that. You get ultra crispy wings. And the second fry is 3 minutes. So you can really crank them out. Fast.

Your guests will thank you. Especially if they are hungry. And it’s less stress in the kitchen. So everybody wins.

Super crispy wings. Three minute batches. That’s a no brainer in my books.

How’s that for a headline stating the incredibly obvious?

This is the unrepentant pursuit of flavour. No matter the cost. A little bit savage really. Just like buffalo chicken wings.

I’ve always been super impressed with the buffalo wing. Mad scientist genius. How do people come up with stuff like that?

I’ve always suspected controlled substances may have been involved. Figured it went something like this…

How about we take the fattiest part of the chicken? And we deep fry it. Deep fried fat. What could be better than that?”

“Wait. How about we deep fry them AND we dip them in butter and hot sauce.”

Turns out it was someone trying to feed hungry kids late at night in Buffalo.

You’d think anything called vindaloo chicken wings would be really spicy. Screaming hot even. But they aren’t. At least they don’t have to be.

You can take these from mild to incendiary. Something for everyone. And it’s dead easy to do.

The sauce is pretty mild as written. Kashmiri chili powder is not that hot. It’s a flavour and colour thing. Pleasant heat. Not a fire thing.

So I feel good about it. This is Indian-ish remember. There’s no claim about authenticity here. Zero.

A little more and you’re well into hot wings territory. And you can take it as far as you want.

Naga pickle is always a trade-off. More is better. But at a price. A palate searing price. Incredible flavour comes with incredible fire.

It’s your call. Mild. Medium. Hot. Incendiary. Make what you like.

But make them. You need vindaloo chicken wings in your life. I know I do. More often than I should.

These are so going on the menu of my imaginary food truck. I’m going to buy an imaginary Ferrari with all the money I make. It’s going to be imaginary awesome.

Vindaloo chicken wings. A little bit decadent. Crazy delicious. And so worth it.