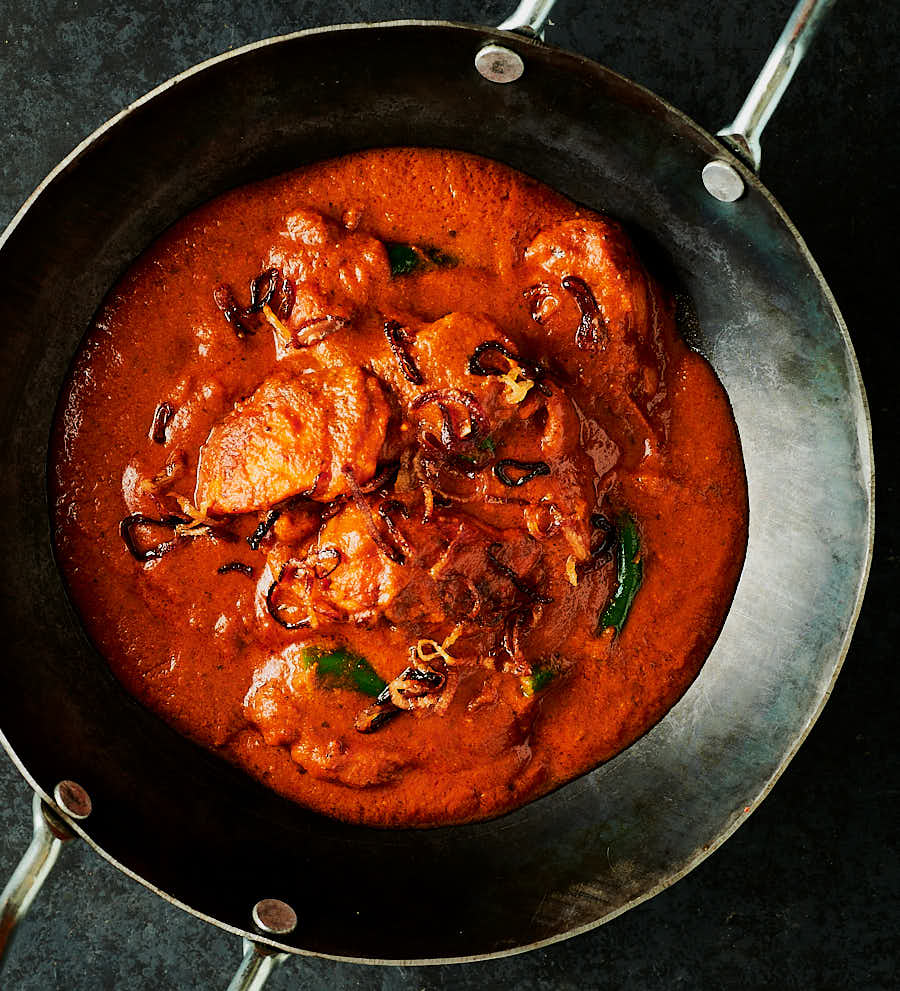 Think rich. Creamy. Complex. A little spicy. And completely over the top. That is chicken changezi.

Chicken changezi is a curry unto it’s own. There’s nothing like it. That I know of anyway. The spice cuts through the cream. It has bite. A lush curry. Special even.

This might not be the chicken changezi you’re expecting. It’s on the bold side. Big flavours. Shouldn’t be a surprise though. This is glebekitchen.

It’s always flavour first here. I’m not the king of subtle. Want to know my worst nightmare? Someone says “Meh. That was a little bland”.

I’m not worried. This is a Mughlai dish. Which is a fancy Persian word for Mongol.

The most famous Mongol of all time? Ghenghis Khan I think. So I’m going to pretend I know Ghenghis.

And I’m going to pretend I know Ghenghis liked his dishes spicy. Nothing to do with reality. But I’m going with it.

So my chicken changezi has to be a little badass. No way it can be bland. Not for the meek. Not crazy. But not to be mistaken for insipid either.

Yes. That’s ridiculous. I know. No need to tell me. I’m just having a bit of fun here.

The history of chicken changezi

With a title like that I bet you are expecting a bunch of facts. I would be too. But this one is a little murky. Willing suspension of disbelief required please.

Chicken changezi big in the North. Ghenghis Khan invaded the North. It’s Mughlai. He was a Mongol.

So of course this must be his favourite dish ever. That makes sense right? OK. Maybe not.

But there’s also the “fact” that they called him Changhez in India. See where this is going? Changez liked his curry just so.

A little creamy. Some dairy to soften things. Maybe all that invading gave him ulcers? Conquering is a tough gig.

I know if I was the royal cook I’d be worried. Wouldn’t want to give him indigestion. There’s only one way that would end. And I’m pretty sure I wouldn’t like it.

So a tasty curry with badass spicing and cream to tame it? That sounds like something like Changez would approve of. That would keep the royal cook alive.

Fun story. Tall tale. Work of fiction. But in the end it doesn’t matter. What matters is that chicken changezi is one tasty curry. And hotel style pushes it over the top.

This part isn’t a joke. If you want deeply flavoured dishes. And you want the lush sauce you get in restaurants. Then hotel style is for you.

Hotel style is about more. More flavour. More polish. Just more. It takes restaurant cooking up a notch. Or two.

Think high end restaurants. Posh restaurants. The ones where you go “Wow – that is so much better than my local takeaway”. That’s what hotel style is about.

It’s called hotel style because that’s what they serve at the fancy restaurants in India. The ones in the crazy hotels. And in high end Indian restaurants around the world.

It’s more work up front. That’s why every restaurant doesn’t do it. Labour costs money. But it’s easier at service. Nowhere near as messy either.

And you get amazing curries. It’s just win win win.

Hotel gravy is the secret

Restaurants don’t make curries in the traditional style. They have tricks to get your dinner in front of you in less than two hours.

And they don’t just have pots of every dish on the menu simmering on a hundred burner stove. That’s a recipe for bankruptcy.

They use sauces. Or gravies. And they turn those gravies into the dishes they serve.

It can be simple. Like regular restaurant style. The same gravy for every dish. Like a blank canvas. I like that. It’s tasty. But maybe a little limiting.

Or it can be more sophisticated. Hotel gravy. Makhani gravy. Specialized gravies. Combination of gravies. The right tool for the job. I like that better.

That’s hotel style. Opens up a whole new world of possibilities. For me. And for you.

Chicken changezi is a curry for kings (or khans)

Changez had it pretty good. At least when it came to his dinner. Chicken Changezi is a little decadent. Seriously tasty. Opulent even.

I don’t think I’ve ever described anything here as opulent. But it is. So opulent is the right word.

I don’t do a lot of creamy curries. Not much dairy in general. My roots are Bengali. Creamy isn’t really my thing. When it comes to Indian anyway.

It also doesn’t quite fit my usual flavour sledgehammer style. I wouldn’t go as far as subtle. It’s a little less over the top. But only a little.

Which is why I’m fascinated by this one. It doesn’t really fit my mold. Creamy. A bit restrained. Not my thing.

And yet I’m putting this one into my regular rotation. Try it. I’m willing to bet you will too. Changhez would approve. 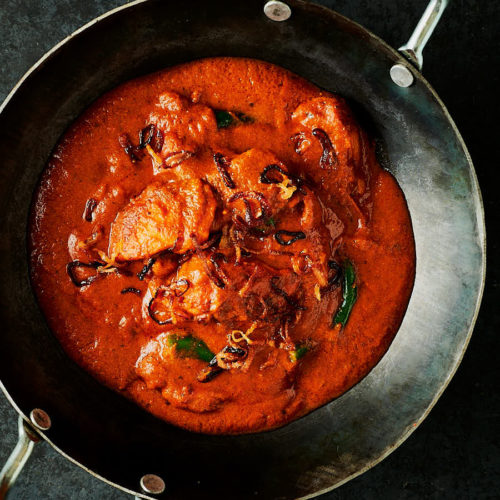 You can use makhani gravy without the final cream and butter in place of the pureed tomatoes. Using the makhani gravy adds an extra dimension of flavour and the richness of the cashews. I’m allergic to cashews so I tend to leave them out. The pureed tomatoes make for a very nice changezi as well. Up to you. If you want to go the distance makhani gravy is a nice touch.  Make your Indian hotel curry gravy ahead of time. It does take time to make so think about doing it the day before. You can freeze one cup portions and pull them out when you need them. That’s what I do. For maximum flavour consider making your garlic ginger paste from scratch. I know I say this a lot but it makes such a difference. 1 cup is 237 ml. And check out the metric conversion feature I just added.