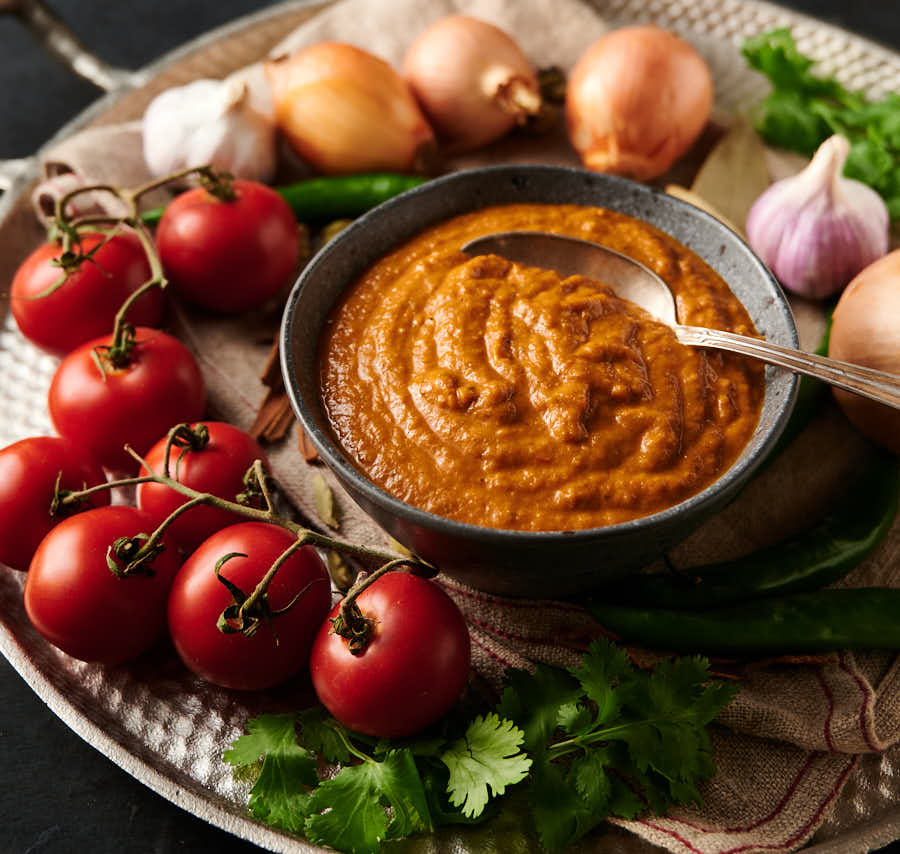 Indian curry gravy, hotel style. This is something new. But something old. Probably really old. And the start of something new. And wonderful. For me. And hopefully for you.

If you like big, bold curries. If you want curries with a lush sauce that makes your mouth dance. Then this might just be the thing you didn’t know you were looking for.

I didn’t know I was looking for it. Until I found out about it. Then I knew I had to have it. And I can’t believe how good it is.

This is not how they make curries in restaurants outside India. This is how they do it in India. And it’s incredible.

Want to make curries like you get at your local takeaway? Like they do at every day Indian restaurants around the world? Then there are many, many recipes on glebekitchen. I call those restaurant style.

This is something different. My guess is this is how they do it at posh restaurants. The best of the best.

I’m just getting started with this. And I’m truly excited. Inspired even. On a mission. This needs to be a thing. My thing. Your thing.

I have a theory. It’s just a theory. So if you’re going to shoot me down be nice. Or don’t. I can take it. But do try to be constructive at least.

I think this is how it’s been done in India for a million years. Well, maybe not a million. But a very, very long time. It’s closer to traditional technique. But adapted for restaurant style cooking.

Indian restaurant style cooking has it’s roots in the UK. At least the style I write about. Indians came to the UK working on ships back in the day.

Apparently they weren’t fans of life on the open sea. Because once they got to the UK they decided to stay rather than face the voyage home.

They needed work. And a lot of them wound up working in restaurants. Those sailors turned cooks became the architects of what is now mainstream Indian restaurant cooking in the UK.

Mainstream has its roots in hotel style

As with all things, it evolved. The thick curry gravy became a thinner version. What’s now called base gravy. They dropped the deep browning of the onions. Because it was easier. Simpler. Less work. And it worked well. Everybody loved it.

It became mainstream. Global. People worked in Indian restaurants in the UK. They migrated around the world. And they took the technique with them. Everywhere.

Except for the mothership. They stuck to their roots. Kept the faith. And somehow nobody is blogging about it. Nothing on YouTube. In English anyway.

Until now. I’m picking up the torch. Because I believe. And like any zealot, I’m hoping I can convince you.

This is curry gravy for bold curries

The nice thing about UK style Indian restaurant cooking is there’s only one curry base. It’s bland by design. One size fits all.

I’m a huge proponent of that. I like to let my curries speak for themselves. One base. Many curries. Easy. Simple. Just like those cooks in the UK figured out.

And I love what you can do with those techniques. Don’t get me wrong. It’s amazing. Seriously amazing. This intro to Indian restaurant curries is a great place to start.

But if you want to take it to the next level? Want to follow me down the rabbit hole? This is how. Curry gravy built for specific curries. Genius.

Not quite bespoke. But not off the rack either. The right tool for the job. How can that not make things better?

This is the bold version. It’s for madras. Garlic chilli chicken. Jalfrezi. Ceylon. For the curries where flavours are applied with a sledge hammer.

It is not for chicken tikka masala. Not by itself anyway. Or korma. Or butter chicken.

It is not delicate. That’s a different curry gravy. I’ll get to that. I’m just starting with the version that goes with my favourite curries.

This is a game changer

This is a whole different approach. And right now I’m think I’m probably the only one talking about it. So you are probably thinking this is crazy.

And it is crazy. Crazy good. If you want to push it. If you want to take it to the next level. Then think about trying this. It’s a whole new way of making restaurant style curries.

Except that it’s about as old as the hills. Doesn’t matter though. What matters is this curry gravy makes amazing curries. I’m not saying this way is better. But I am thinking it… 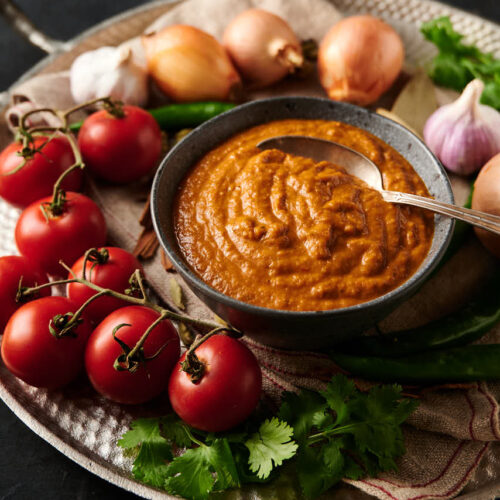 This is how they make the base gravy in fine Indian hotels.
Course stuff
Cuisine Indian
Keyword base gravy, Indian restaurant base gravy
Servings 8 cups
Calories 342kcal
Author romain | glebekitchen

This recipe makes enough for 6-8 restaurant sized curries. Make it and freeze it in one cup portions (237ml). That way, you can pull it out whenever you feel like making dinner.