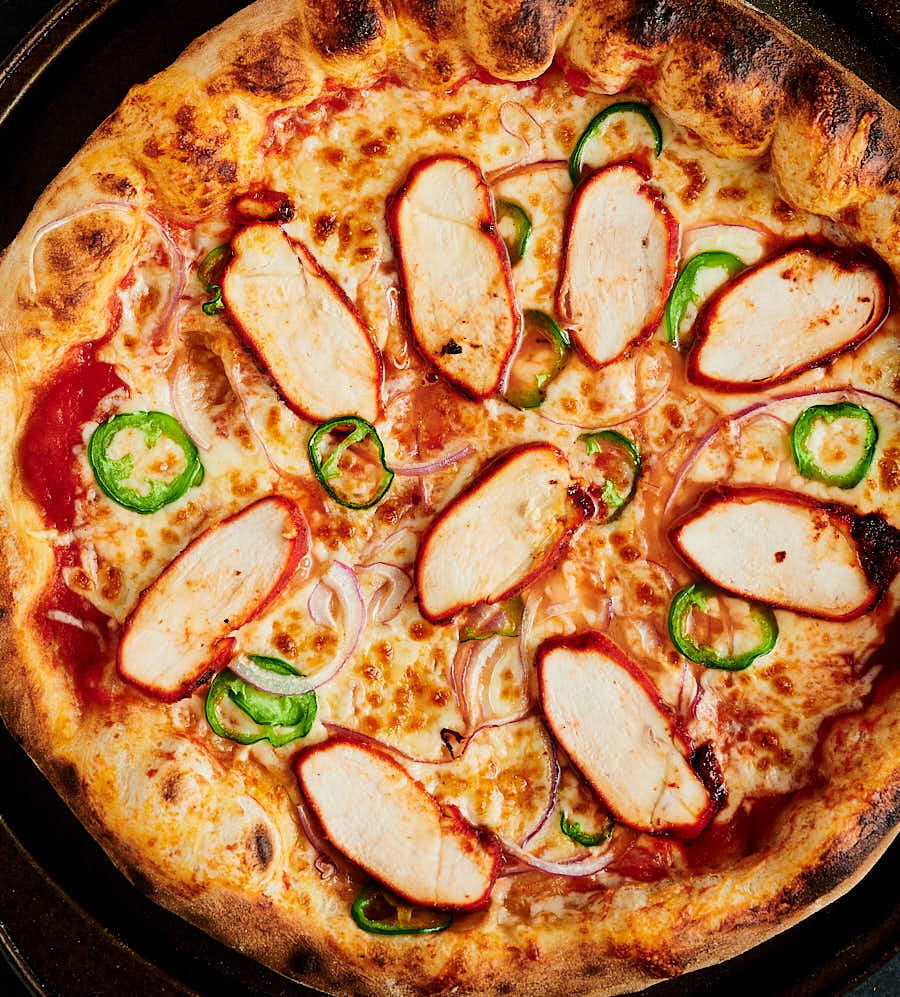 Pizza. A little bit of food magic. I think anyway. A few simple ingredients. Some heat. A culinary miracle happens. Tandoori chicken pizza takes that magic up a notch.

I don’t really understand my love of pizza. It’s my kryptonite. I will eat pizza when I’m full.

Any pizza without pineapple on it anyway. I know. It’s wrong. But I can’t help it. It’s a sickness. A wonderful, wonderful sickness.

And somehow tandoori chicken pizza has become my favourite. Top of my list. Not sure how that happened. But it did.

There’s a bit of a movement afoot. Indian restaurants are breaking the mold. Casting off the chains of formula Indian menus.

It’s about familiar food. Kissed with Indian flavours. Something you know. But with a twist. Funky. Fun. And delicious. All the cool restaurants are doing it.

Indian inspired. Taking what you know. And bringing those big bold Indian flavours to it. I call it Indian-ish. Not quite Indian. But close. Just fun.

Desi pizza is coming to a pizzeria near you

What does that have to do with pizza? It’s a great example of Indian-ish. Something familiar but different. Pizza. With Indian flavours.

It goes by Indian pizza. Or desi pizza. Google it. It’s a thing. I’m not making this up. I’m just trying to spread the word.

It’s not intuitive. Ask me to pick two cuisines that don’t play well together? Indian and Italian has to be close to the top.

And yet it works. And it just doesn’t sort of work. It works incredibly well. I am actually amazed at how well in fact.

And before you ask. This is way better than naan with stuff on top of it. Not in the same league.

Not saying that naan with stuff on it isn’t good. Just saying this is a whole lot better. But remember. I am a pizza addict. Factor that into your thinking.

Tandoori chicken pizza is all about balance

Tandoori chicken pizza is the simplest of the desi pizzas. In my rotation anyway. Not a lot to it. But that’s what makes pizza great. Complicated is not always better.

If a pizzeria can pull that off they know their stuff. There is nowhere to hide. Grand master territory.

Notice I put crust first. Did that on purpose. Crust is the real test. Great crust. Great pizza. Mediocre crust. Mediocre pizza. You can try to hide it. But you can’t fix it.

The crust is the thing

Crust. Sauce. Cheese. Toppings. There’s really not a lot to pizza. So the crust matters. A lot.

I’ve spent more than 10 years working on my Neapolitan pizza dough. And I’m not done yet. I chase the pizza dough dragon.

Nothing more. Nothing less. No sugar. No oil. Four ingredients. Slow fermentation. Seriously complex flavours. They have rules about this. For real.

It is not one size fits all though. No silver bullet here. My version doesn’t work at oven temperatures under around 650F. It needs real heat to make it work.

It won’t work in a regular kitchen oven. Don’t try. It will suck. Badly. You’ve been warned. I’m not happy about it either. But it is a fact.

My best advice? Go with the dough that works for you. If it ain’t broke don’t fix it.

But never stop trying to improve. There’s real magic to be had. When you nail it. Did I mention I’m an addict?

I used to do a complicated sauce for this pizza. It was really good. But in the end simple won. For me anyway.

Turns out the sauce I like best is the same one I use for all my red Neapolitan pizzas.

One 28 ounce can of whole San Marzano tomatoes. Real San Marzano. DOP. Passed through a food mill. And one teaspoon of kosher salt. Mix. Done.

That’s it. Not cooked. No spices. No herbs. Just pure tomato flavour.

It’s perfect. I think anyway. It doesn’t get in the way. Provides a nice acidic balance. A canvas on which to paint your pizza. Proof that less can actually be more.

Works incredibly well against the tandoori chicken. The onion. The bite of the green chilies. The richness of the cheese. And the clean tomato flavour.

A little methi pushes it into serious Indian-ish territory

This is a tale of two pizzas. And both are great. So you have a choice to make.

If you really want a more Indian-ish pizza think about a little bit of kasoori methi. This one is a tough call. I’m torn.

It’s just one ingredient. So you wouldn’t think it makes a huge difference. But it does. Changes the pizza completely. Pushes it deep into Indian territory.

I wouldn’t use San Marzano tomatoes if you go the kasoori methi route. It’s an assertive flavour. Bit of a sledgehammer. Any good quality canned tomato will do.

Try it both ways. That’s the beauty of pizza. You keep playing with ingredients. It never gets old. There’s always something you can tweak.

I can hear what’s going on in your head.

“Tandoori chicken pizza? That’s Indian right? Do you not know anything about Indian cooking? Jalapeños are not Indian. Green chilies are Indian. Jwala chilies are where it’s at. Jalapeños? What????”

I get that. I use jwala chilies for pretty much everything Indian. Everything that calls for fresh green chilies anyway.

I always have jwalas in my fridge. Always. But they are wrong for tandoori chicken pizza. Totally wrong.

This is pizza. Keep that in mind. Green bell peppers are a quintessential pizza topping. Maybe not in Italy. But everywhere else in the world.

That is why jalapeños are right here. There’s method in my madness. Green bell pepper flavour. But with a little bite. Perfect. For this pizza anyway.

I’m usually not a big fan of day-glo red tandoori chicken. Trying to get away from it in fact. But it looks so good on this pizza. I can’t resist. My bad.

It’s purely a look thing. The red contributes zero flavour. There is no point. Except it looks cool. I feel a bit dirty. Guilty even. Hope you can forgive me.

You can go as far as you want with the chicken. When tandoori is the main event I use a serious tandoori marinade. It’s a bit involved. And it is really popular.

When I need tandoori in a hurry I keep it simple. Tandoori masala. A bit of salt. Garlic ginger paste. Kasoori methi. Neutral oil, And a bit of naga pickle.

That’s actually a really good blend. When you are in a hurry. You just need to watch your salt. Commercial tandoori masalas can have a lot of salt.

This tandoori chicken works in the oven. But it works better over charcoal. There’s just something about charcoal that makes me smile.

Either way the key is to pull when it’s a little underdone. Because it gets cooked again on the pizza.

If you like pizza you need to try desi pizza

This one crept up on me. I started making Indian-ish pizza because I like Indian flavours. Just because. Had no idea it was a thing. Completely clueless. As usual. I’m not very trendy.

And somehow I got hooked. Addicted. Desi is now my favourite pizza style. Hands down. No contest.

This is the one that started it all for me. Tandoori chicken. Jalapeno. Red onion. Nothing to it.

The pizza police are coming for me. I’m sure of it. And they should. I’m spreading pizza heresy.

I’m OK with it though. I’ll take the heat. Do the time. All I ask is you try desi pizza. So you can see for yourself. I don’t think you’ll be disappointed… 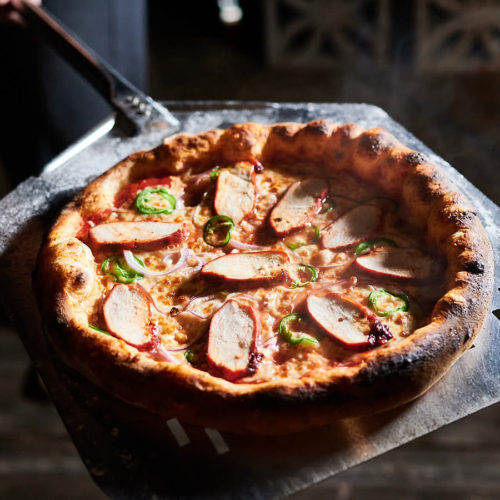 If you really want to get serious about your pizza making and have an oven that can get to north of 700F consider making a long room temperature ferment. I’ve been working on this Neapolitan pizza dough for more than a decade. Told you I was into pizza…