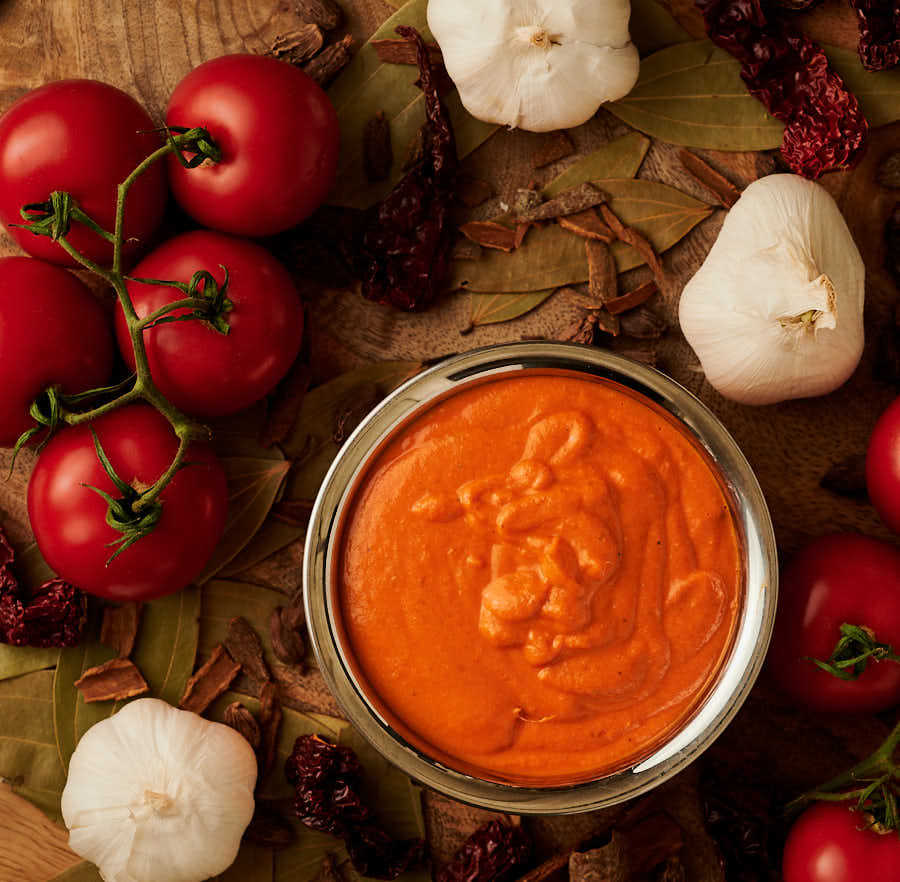 Hotel style makhani gravy. Want to make butter chicken like you dream about? This is the first step. The first step to other great dishes too.

Makhani gravy is a foundational sauce. Think French mother sauces. Just like hotel gravy. A step on the path to a finished dish. The right tool for the job.

This one is for butter chicken. Or anywhere you want to bring big, spiced tomato flavour to your dish.

Here’s something I bet you didn’t know. Just about every Indian restaurant runs with two base gravies.

There’s one general purpose onion based gravy. It’s used in just about everything.

But there’s another one you never hear about. The butter chicken gravy. This is that gravy. There’s a little twist here though. It’s also an ingredient in other curries.

Pretty good chance you haven’t heard about hotel style. Unless you’re a regular around here. It’s not mainstream. Not yet.

But it’s really, really good. It’s restaurant style cooking. Just not in the way you might know.

Restaurant style is what you get pretty much anywhere you go. It’s good. I make it all the time. A lot of people do. There are lots of restaurant style recipes on glebekitchen. I’m a fan.

But when I want to pull out all the stops. When I want to totally crush it. That’s when I turn to hotel style.

Restaurant style is one style fits all. It’s fast. It’s relatively easy. And it’s tasty. People love it. I love it.

Hotel style is a more disciplined approach. There are multiple different base gravies.

Think about that for a second. It’s called base gravy for a reason.

Because it’s foundational. The base of what you are cooking. That’s classical cooking discipline. French cuisine has 5 mother sauces. Hotel style has more than 10.

Don’t freak out though. You don’t have to make 10 base gravies. One step at a time. You’re not running a kitchen in an Indian hotel. You’re allowed to just have fun.

Between makhani and the hotel gravy you’re in good shape. I’ll probably roll out more in time though. At least one more. Two or three max.

For now you have the two big ones. And the combination of the two. So three variants. That’s already pretty good.

On the matter of cashews

Cashews are a pretty common ingredient in traditional Indian cooking. They add a wonderful richness to dishes. Without being cloying. Or so I’m told.

If you look around glebekitchen you’ll notice there are no cashews anywhere. There’s a reason.

I am allergic to cashews. So this one is tough for me. I developed and tested this recipe with cashews. I tasted it. It was perfect. And it made me unwell.

I also tested the hotel style butter chicken with with and without cashews. The cashew version won. It wasn’t even close.

But this is the last time I’m testing with cashews. All the other recipes I make with makhani gravy will be cashew free. Full disclosure. I’ll probably figure something out using macadamia nuts though.

The pictures are taken with cashews. So if you leave them out it will look different.

And the matter of onions

There are no onions in makhani gravy. Not a shallot. No scallions. There are zero onions here. Madness you say?

Nope. Not madness at all. Butter chicken is proof. Takeaway butter chicken may have onions. But that’s takeaway.

We aren’t talking takeaway here though. This is hotel style. And hotel style is upscale. It’s about going the distance.

On butter and cream

If you are making makhani gravy it needs butter and cream. Makhani means butter. Hard to make it without the star ingredient.

But the timing doesn’t matter as much. You can add butter and cream when you make the gravy. Or you can add it into the final dish.

Technically, it isn’t makhani gravy until you add the butter and cream. But I’m using this gravy in other dishes. Where maybe butter isn’t necessarily right.

So I leave it out. Stop this recipe right before the last step. Add the butter and cream into the final dish. If I need it.

And if I don’t it’s good to go. Like a tomato gravy. Tomato masala. So this is two gravies in one.

Makhani gravy is an ingredient. It can stand alone. In butter chicken. Dal makhani. Or it can be used together with the regular hotel gravy.

Makhani gravy and chicken tikka is pretty much butter chicken. Not quite. But pretty close.

A little hotel gravy. A little makhani gravy. And all of a sudden you are down the rabbit hole.

Hello Alice. So very glad to see you here. 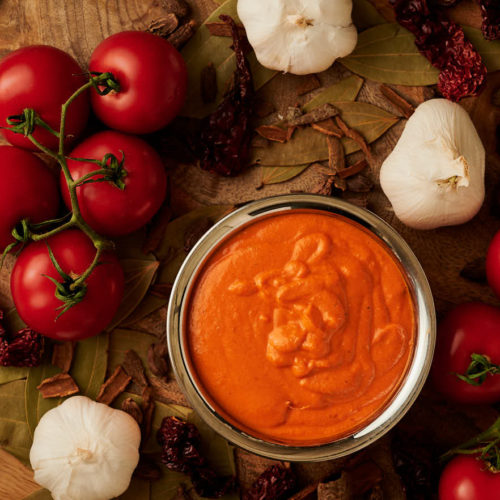 If you skipped straight to the recipe the cashews aren’t really optional. I’m allergic to cashews. I tested this recipe with cashews and it’s way better with them. Not even close really. If you can eat cashews don’t leave them out.