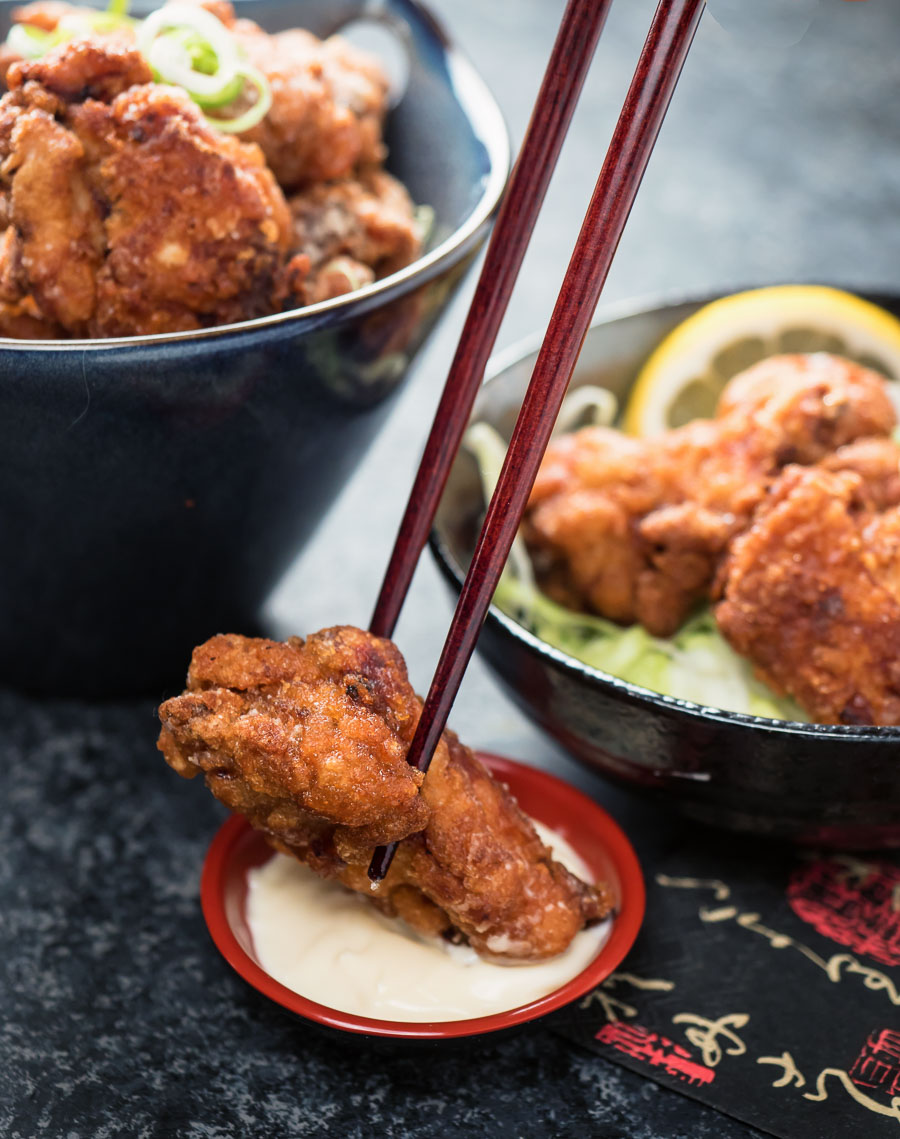 Chicken karaage is this wonderful Japanese take on fried chicken. It gets a big flavour kick from a quick marinade. And the potato starch makes it super crispy. Tasty stuff. Like the best chicken nugget you ever had.

You see on every Japanese menu. Well, maybe every menu outside of Japan. Chicken karaage is an appetizer up there next to gyoza and edamame. Great with drinks. Party food.

Technically this recipe is tatsuta-age, not karaage. It’s a subtle difference. And one largely ignored on the internet. As far as I can tell chicken karaage is not marinated before dredging in potato starch. Tatsuta-age is. 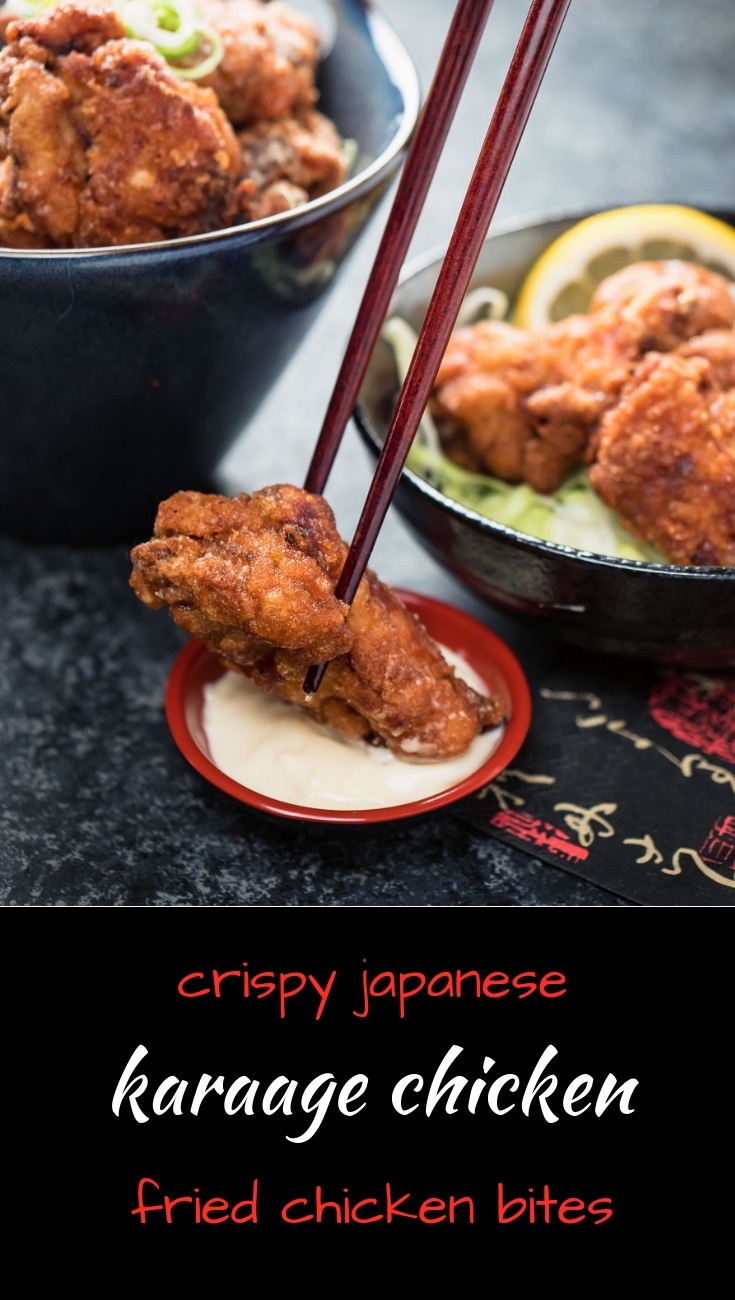 I’m going to call it chicken karaage here. I’m not the internet police. So I’m going with the flow. Doesn’t matter what you call it though. It’s good either way. 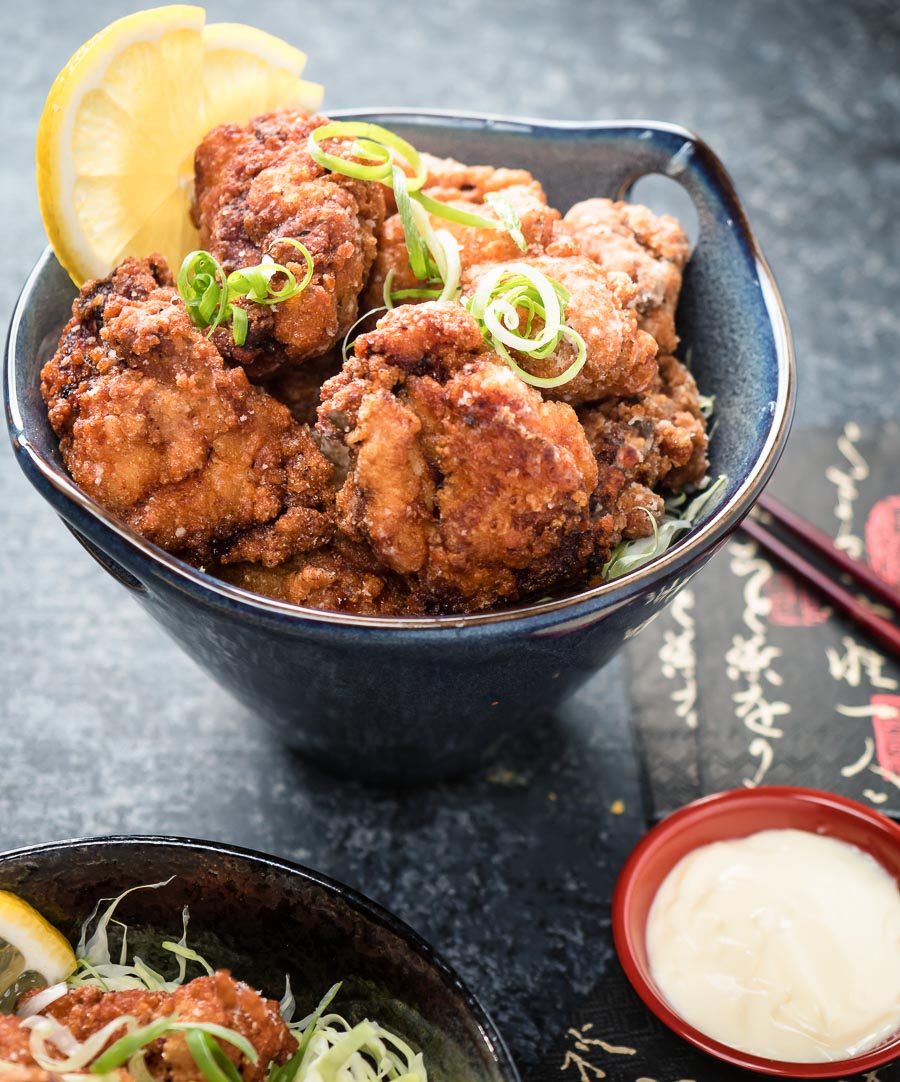 Use dark meat and leave the skin on

What really makes chicken karaage is the skin. No skinless chicken here. I love that. Deep fried chicken skin. What’s better than that?

Use chicken thighs for this recipe. Please use thighs. It tastes better. Richer. Plus deep fried white meat isn’t so tasty once you let it cool a bit. Dark meat doesn’t have that problem.

Think of it as insurance. It’s harder to screw up when you use dark meat.

Chicken karaage needs a really light hand on the coating

Classic chicken karaage calls for potato starch. It’s called katakuriko in Japan. If you can’t find it, cornstarch isn’t that far off.

What is far off is potato flour. Potato flour is not potato starch. And it makes a big difference.

I screwed this up once trying to recreate a southern fried chicken recipe from a restaurant here in town. Didn’t work until I realized potato flour was not the same as potato starch. Ruined the dish. Epic fail even. I was not happy.

Don’t make the same mistake. It’s potato starch. Not potato flour. Not the same at all. You’ll do a bunch of work to make lousy chicken karaage. And then blame me. 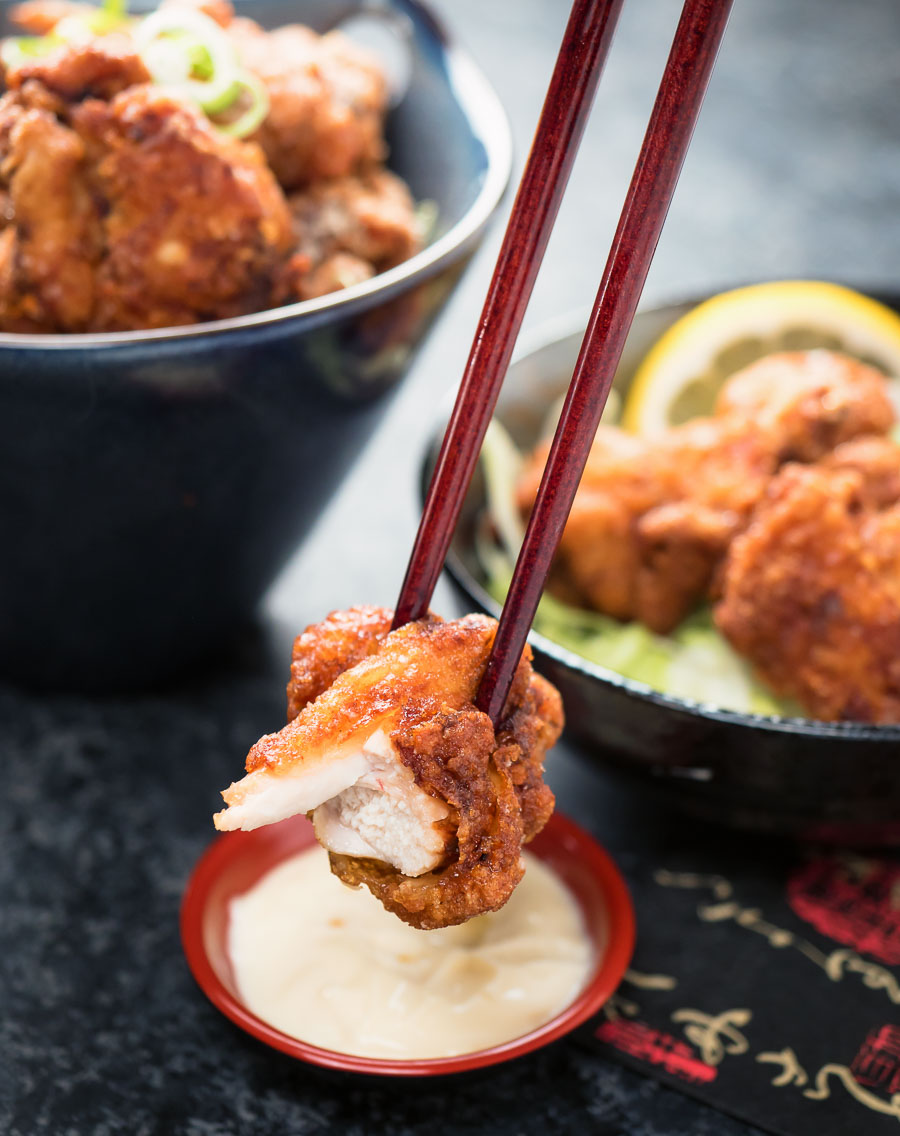 A big thing to note. Too much potato starch on the chicken is bad. You want a light hand. A really light hand. This isn’t southern fried. You don’t want craggy chicken.

Think dusting. Lightly dredged. Really lightly dredged. Too much and it gets tough. Or you get blotchy white chicken. Not good. This is really important.

Don’t be put off by the amount of salt in this recipe. Between the soy and added salt it sounds like a lot. But keep in mind this is a marinade. It’s almost all going to be left behind.

Serve chicken karaage with your choice of garnishes

You can serve chicken karaage up a few different ways. It’s kind of fun that way. You can really mix it up.

The classic way is with lemon and kewpie mayonnaise. It’s good that way. Seems over the top. Fried chicken with mayonnaise. But think chicken burger. Make sense?

Kewpie mayo is not the same as regular mayo. Maybe not as dramatic as potato starch vs. potato flour but different. It has more tang. I’ve become a fan.

A soy based dipping sauce works here as well. A bit of soy. A little yuzo.  A sort of ponzu sauce.

If you want to really mix it up I like it with gochujang mayonnaise. That moves it towards Korea. It’s in your face this way. It’s a nice twist though. For all your jaded foodie friends. 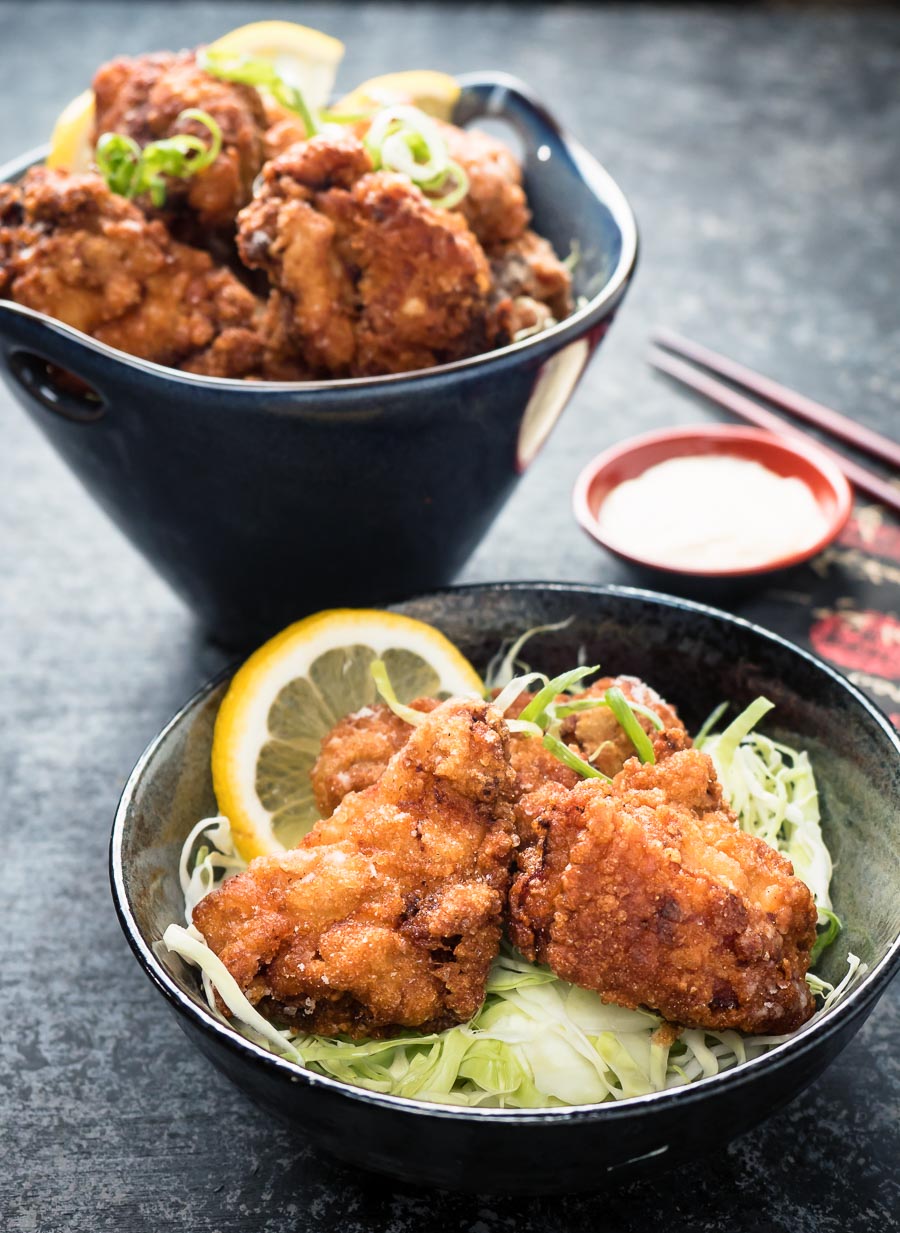 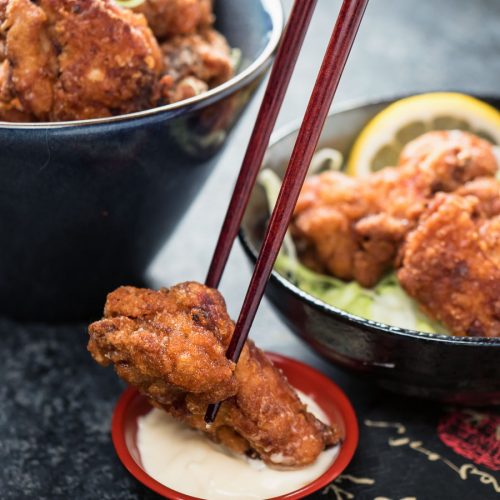 If you want to mix it up a bit try serving it with gochujang mayonnaise. That moves things firmly in a Korean direction. Even if you don't, keep gochu mayo in the back of your mind. It's tasty stuff on sandwiches...