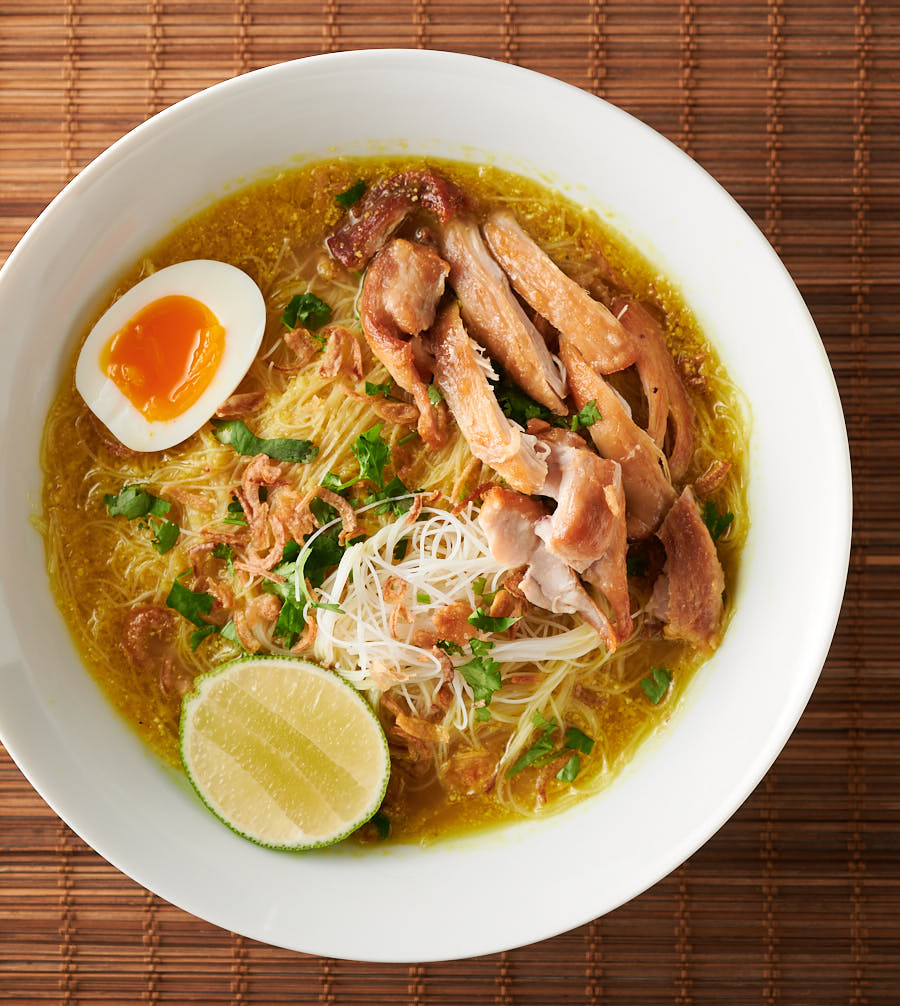 I love noodles. And I have a thing for noodle soups. Look around glebe kitchen. Ramen. Pho. Laksa. Classic chicken noodle. Turkey noodle from scratch. Bo kho. Khao soi. Noodle soup puts me in a happy place. And soto ayam is right up there.

Soto ayam is unto itself. Most classic noodle soups are. Each has its distinctive broth. Toppings. Noodles. Spicing. You can take a trip around the world on noodle soup.

You could serve it as an appetizer. A cup of soup. But it comes into its own as the star. A big bowl of hot noodles in broth. A generous portion of the lemongrass infused fried chicken. A perfect medium boiled egg. See where I’m going here? Meal in a bowl.

It’s closest to laksa. But with way less coconut milk. There’s a spice paste at the base like laksa. Tons of flavour from that. The tastes are closer to Thai than Malay though. So not quite like laksa. Like I said. Unto itself.

Indonesian chicken noodle soup is a labour of love

Funny thing about most of the big Asian soups. The famous ones. They are all real work. This is not the same as a simple cream of broccoli soup. You don’t just chuck a bunch of stuff in a pot and call it done.

But every step adds something special. The chicken gets poached in a lemongrass broth. That adds more chicken flavour to the broth. And a hint of lemongrass to the chicken.

That chicken gets fried. So it has this wonderful crispy texture. And deeper chicken flavour.

There’s a paste. Shallots. Garlic. Spices. Ginger. That gets cooked down. Until the flavours meld into this wonderful soup base.

The paste goes into the lemongrass broth. Double tasty. It’s not as crazy as tonkotsu ramen from scratch but it’s not trivial either.

You get something at the other end of the journey. A little insight into the Indonesian kitchen. A truly great bowl of soup. For me it’s worth it. You have to decide for yourself. Are crazy soups your thing?

Full disclosure. I’m not Indonesian. I didn’t grow up eating Indonesian. My mom didn’t make Indonesian chicken noodle soup for me. This is not a family secret recipe.

I couldn’t find anything that lined up with it in any cookbook I own. And I own a lot of cookbooks. Looking at recipes online didn’t help either.

In the end I used my VPN. Set it to Indonesia. So I could get to google Indonesia. Watched a bunch of Indonesian youtube videos. A lot of google translate. Learned some new words. And came up with this.

It’s a bit more work than I expected. More work than most soto ayam recipes I’ve seen. But in the end that’s what makes it special. Going the distance.

The chicken – It’s poached in a lemongrass lime leaf broth. And then it’s shallow fried. You wind up with these little bites of lemongrass infused crispy chicken. Crazy good.

The spicing – The spicing for soto ayam actually pretty delicate. A bit of turmeric. Just enough to give the soup some colour. A little pepper. And some coriander powder. It’s actually vaguely Indian tasting until you add in the lemongrass and lime leaf.

The spice paste – Frying the shallots, garlic and ginger is a nice touch. Not one I’d thought of on my own. This one is pure Indonesian youtube. Mellows the sharp edges. It makes a difference.

Fried shallots – Fried shallots are way better than you’d expect. And you should expect them to be pretty tasty. Think onion rings. Now think about the complexity shallots bring. Getting it yet? You need to try these little flavour bombs.

You need to try this soup

Indonesian chicken noodle soup. Dinner in a bowl. If you don’t know soto ayam you need to try it.

A bit more effort than you might expect. But so worth it. This is one tasty soup. Satisfying. Rich chicken. Flavourful, complex broth. Fried shallots. Cilantro.

And a not so authentic medium boiled egg just to push it over the top. That’s a glebe kitchen touch.

It all just works. In a way you might not expect. But in a way you are going to love. After all, who doesn’t love chicken noodle soup? Make it. Or find a restaurant that serves it. Just try it. Seriously. Find a way.

“A person who doesn’t love chicken noodle soup is a person without a soul” said somebody. Somewhere. At some point. Maybe. OK – maybe not. I made that up. But think about it… 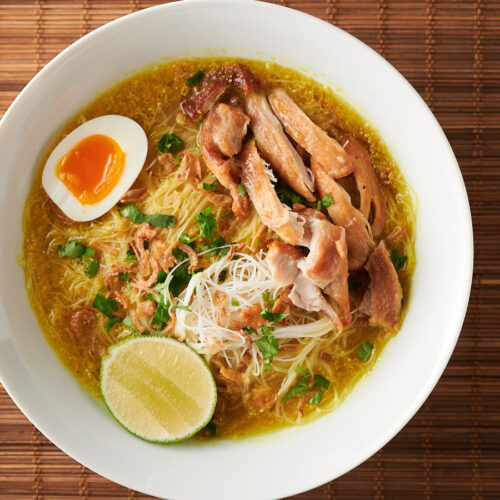 The chicken and soup base

You are going to fry the chicken. Might as well fry up some shallots as well.  Grab 2 or 3 large shallots. Peel them. Slice them thinly to make rings. Heat up two cups of oil to 325F. Use a slotted spoon to carefully lower the shallots into the hot oil. Do this in batches. Hot oil and shallots makes a lot of bubbles. A lot. Nobody needs hot oil boiling over on the stove. Shallots keep cooking when they come out of the oil so pull them when they are tan. Watch your first batch cool. If they are too dark pull them a little sooner next time. You’ll see and soon get the hang of it. Repeat until all the shallots are cooked. Or you can just buy fried onions at your local asian grocer. But you are going to fry the chicken anyway so…