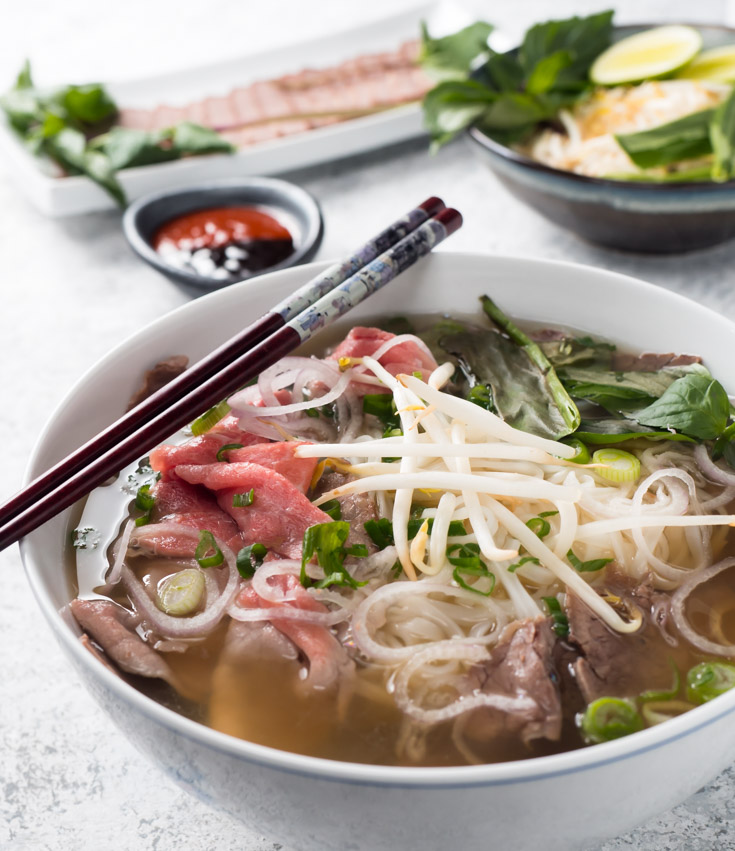 Beef pho is one of the truly epic Asian noodle soups. It’s a perfect balance of rice noodles, beef and a haunting broth. Magic in a bowl.

It’s no secret I have a thing for Asian soups. Look around this blog. I can’t help myself. If there was such a thing as Asian soups anonymous there would probably be an intervention in my future.

I don’t think I’m alone. You can’t go 500 feet where I live without running into a Vietnamese restaurant. And make no mistake. They all specialize in pho.

They have other things on the menu but the pho brings the people in. Brings me in anyway. And all my friends. Everyone I know really… 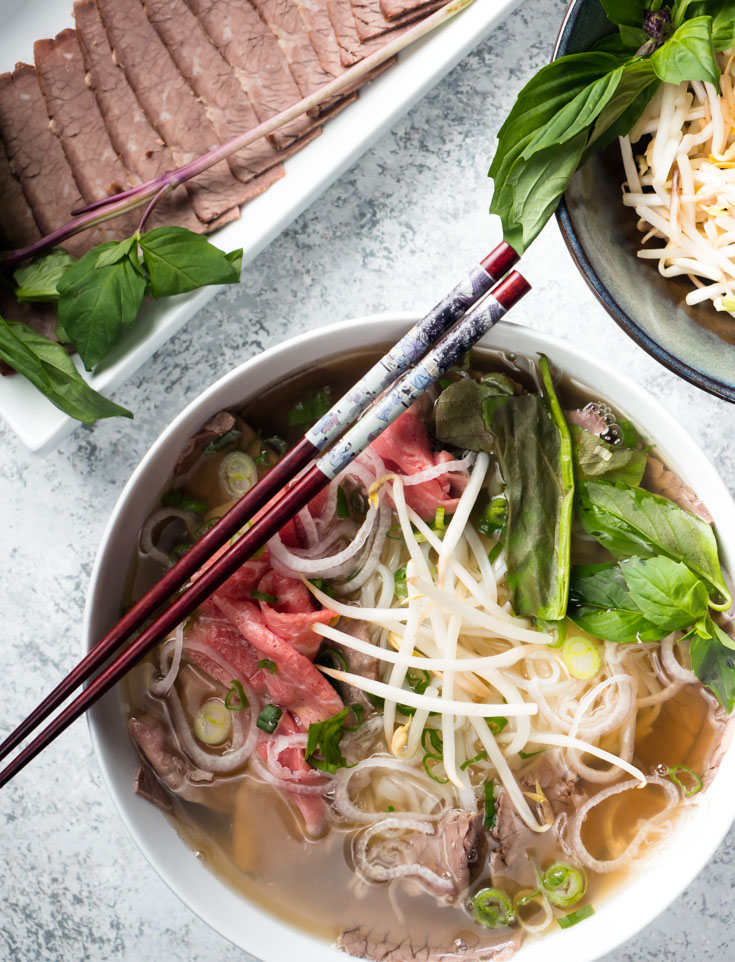 Authentic pho bo – worth it but it’s real work

Making full blown beef pho is serious business. Takes 12 hours to make the broth. Another couple hours to cook the brisket. Then you are good to go. 14 hours later.

It’s worth it. But you don’t always have 14 hours to make broth. Reality gets in the way. It is the best though. Pho bo. The way it’s meant to be. 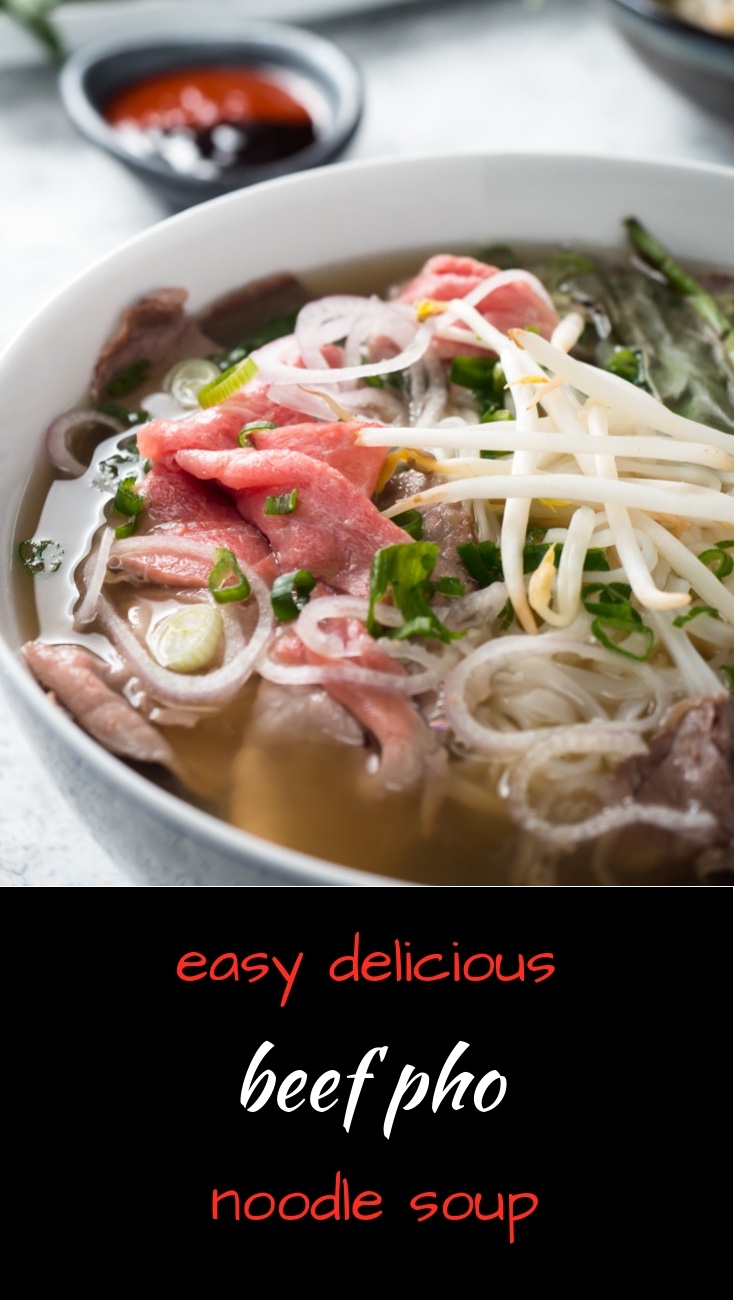 When I make it, I make big batches. My biggest stockpot full. And I freeze it in 2 person portions. Still need to cook the brisket but at least you can eat the same day. Not a bad system but I like pho a lot. So I run out of frozen broth.

There are also a bunch of faux pho recipes out there. Take some store bought beef broth. Toss in a star anise and a cinnamon stick. Simmer for 10 minutes. Some fondue beef from the grocery store freezer section. Serve. I don’t know what that is but I know I don’t want it. 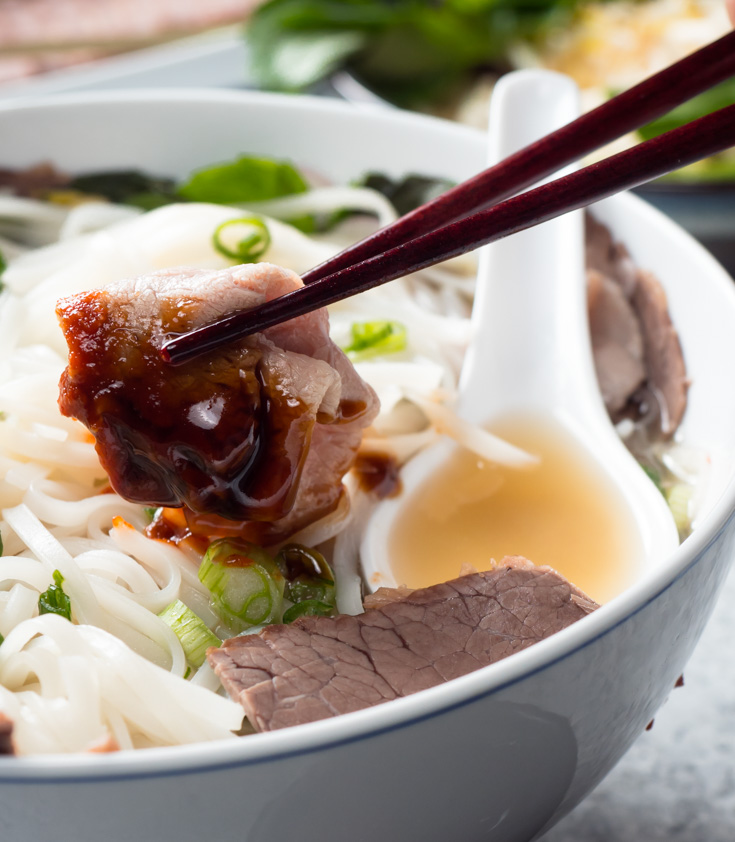 This is an easier way to get your beef pho fix

This is somewhere in the middle. You can make it in a few hours. It’s not as good as the full blown approach. I’m not going to lie. Nothing comes for free.

I am not a pho magician. Sorry. No silver bullet here. The hard way is better. But not as much as you might think. 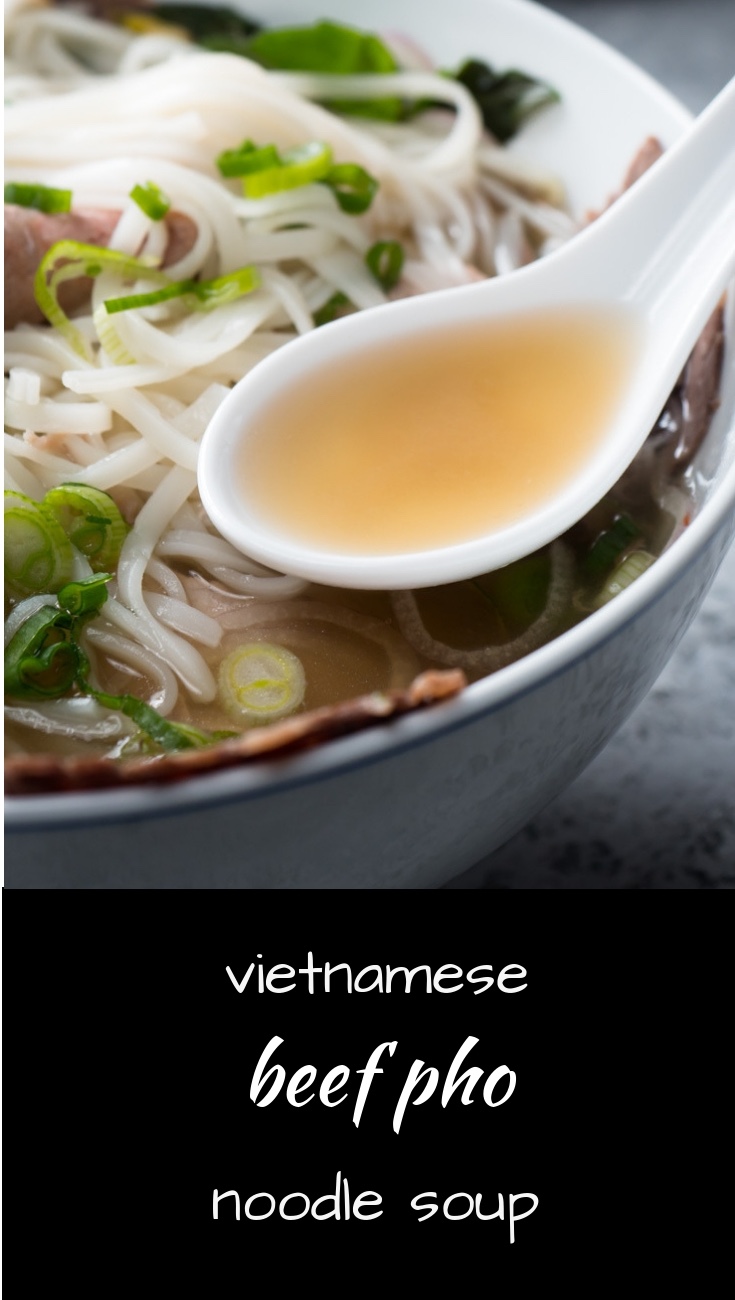 And it’s better than faux pho. Way better. Closer to the real stuff. A reasonable facsimile. Still takes time. Maybe not the best for weeknights. But totally doable starting late on a Sunday afternoon.

Simple concept really. You use the brisket to make the broth. Some onion. Some ginger. A few spices. Salt and fish sauce. A bit of sugar. It works. Smells like pho broth. Tastes like pho broth.

And if you really want to go for gold I have three letters for you. MSG. It’s an ingredient in Saigon style pho. The stuff you get at your local pho joint.

They all use it. I don’t. But you can. Just swap out the salt for MSG. That’s the little something that’s missing. 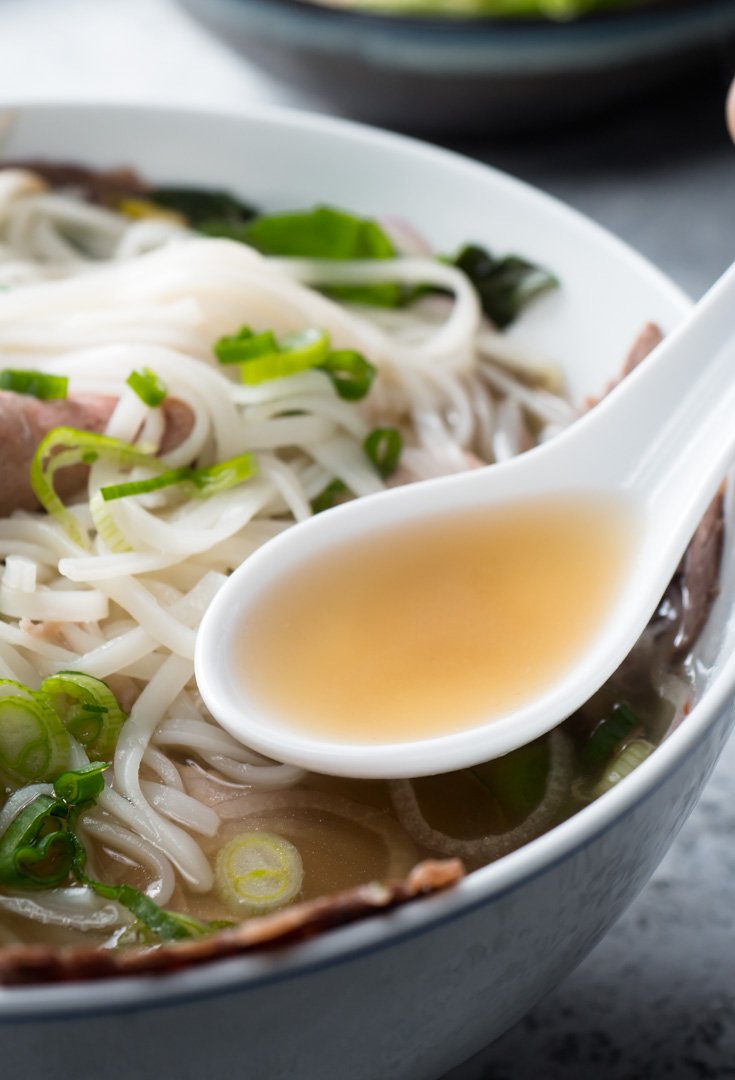 One thing took me a long time to get my head around. Use chicken stock to make beef pho. Sounds crazy but I don’t like store bought beef stock. Really don’t like it.

To me it tastes like chemicals mixed with caramel. Maybe a crayon dissolved into it for colour. Nasty. I’m just not a fan. I don’t get the taste of beef from it. Not at all.

You may be different. That’s OK. If you can respect my tastes I will respect yours.

But try it with chicken stock. Store bought works here. Not sure why. But it does. I’ve even tried a couple cups of beef stock with mostly chicken stock. Even that doesn’t work for me.

The brisket makes it beefy. The cinnamon, black cardamom and star anise give it the haunting notes. The onion smooths everything out. And the fish sauce brings it together.

Purists will note there’s no char roasted onions and ginger in this recipe. I never said this was the real deal. It takes time and it doesn’t make a huge difference.

Not saying it makes no difference though. It does add a little something. But this is simplified pho. Once you start adding in all the nuances you might as well go the distance.

Get 10 pounds of beef bones and some oxtail and have at it. 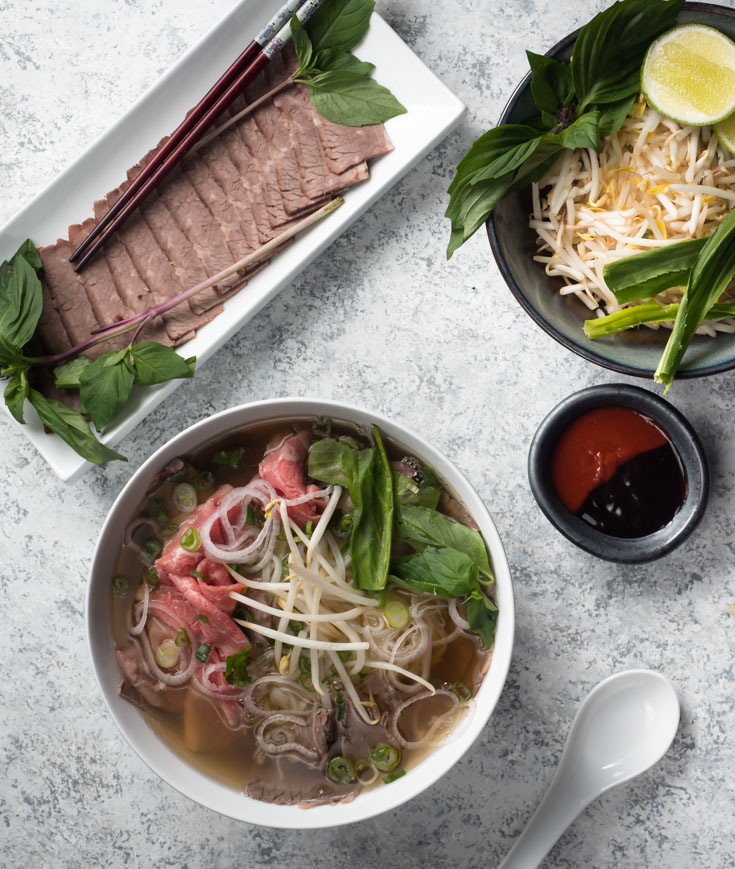 Chill the beef to slice thinly

I’ve tried rushing. You know how it goes. You’re starving so you cut corners. You want your beef pho fix. But one corner you can’t cut is making sure the brisket is cold before you try slicing it.

You don’t want thick slices of brisket in your beef pho. Wait. Be patient. Cold beef. It works. 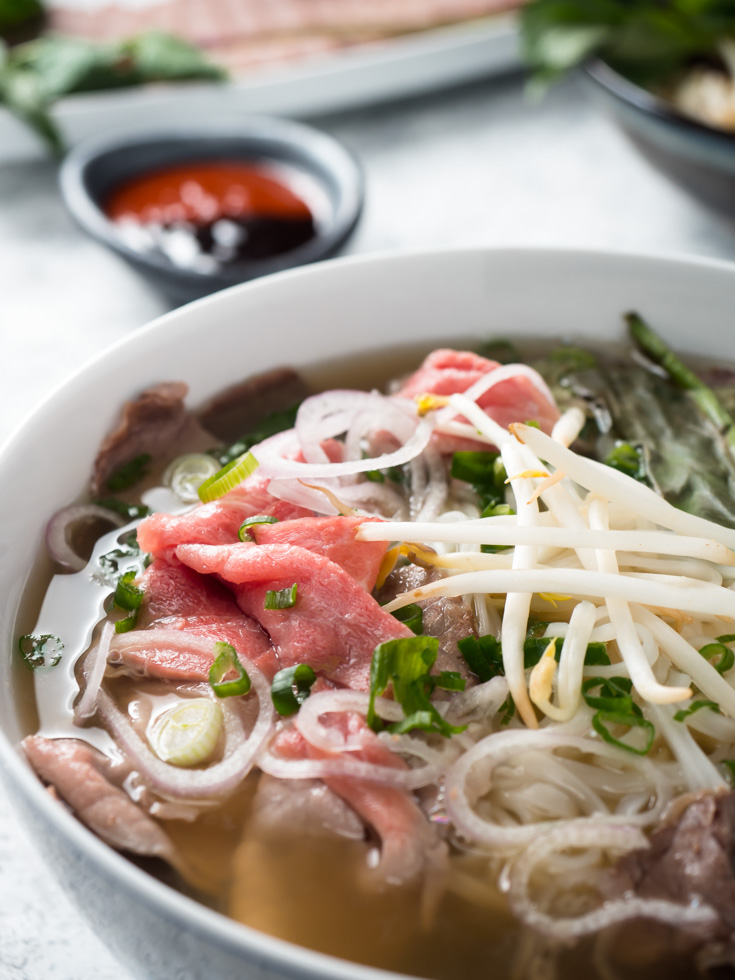 A simple trick for those perfect, chewy pho noodles

I found this one buried at the bottom of an Epicurious recipe. I find rice noodles in hot soup a bit tricky. Cook them too little. Hard noodles. Cook them too long. Mush.

It’s a simple trick. But it always works. Soak your rice noodles in cold water for around 30 minutes. Bring a pot of water to a boil. Drop the noodles into a large strainer (a pasta pot works really well here).

Cook the noodles for 30 seconds. Test one. Somewhere between 30 seconds and a minute the noodles will get chewy but not hard. Pull them. They will cook a bit more in the hot broth.

That’s it. Beef pho. Better than faux pho. Almost the real deal. Good enough for me. But then again, I am an addict. Nobody should trust an addict… 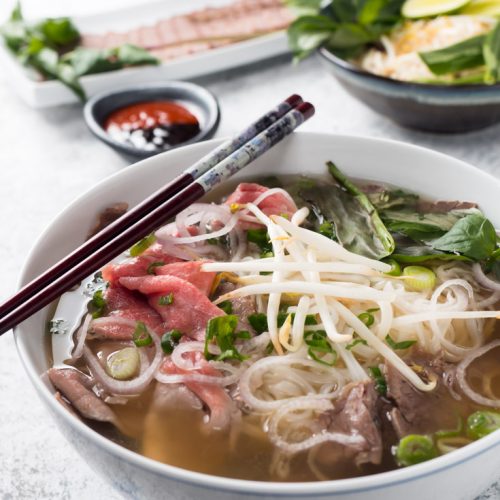 If you want to serve beef pho with rare beef get your butcher to slice some eye of the round. Call ahead. They will need to freeze it to make it work. If you want to go upscale sirloin is a nice touch.