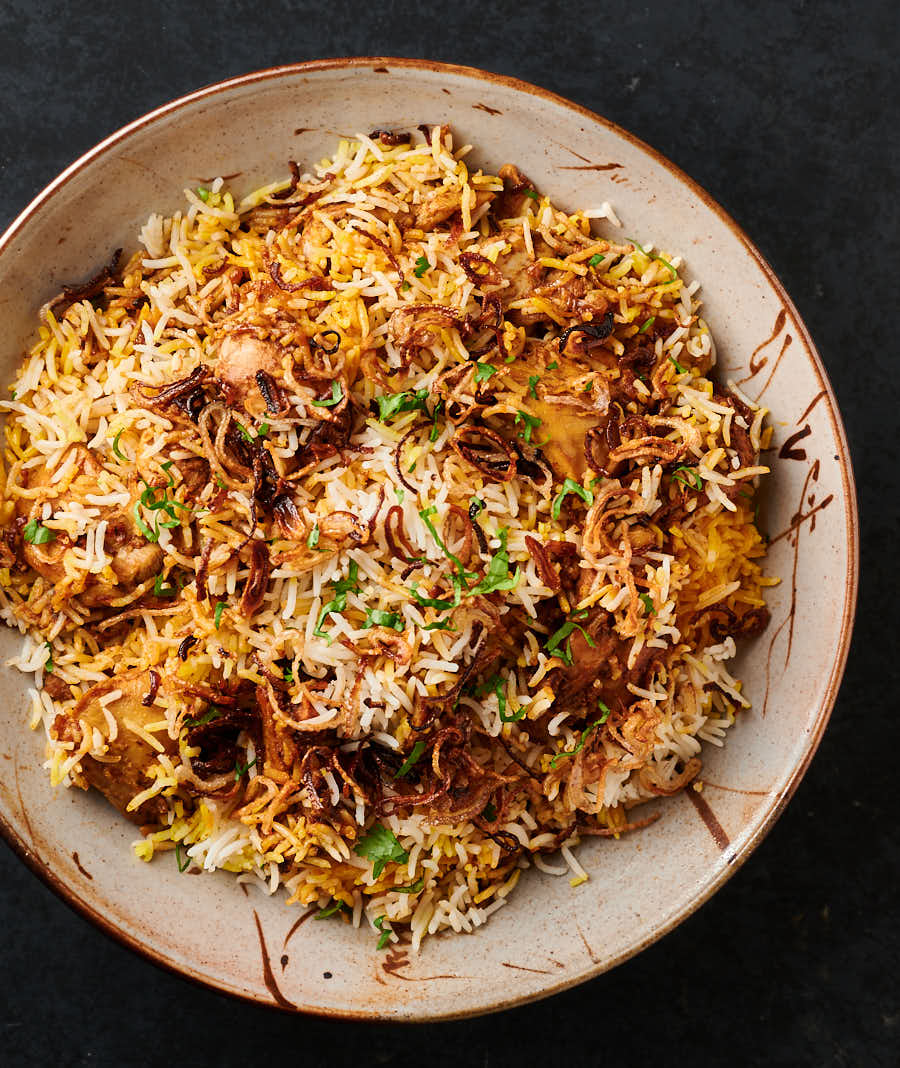 If you have ever made biryani you know what I’m talking about. It’s the moment you crack it open. The aromas reach out of the pot and grab you. You take that first bite. And you know you’ve made something special.

Traditional biryani is a labour of love. It’s real work. Worth it. So worth it. But it takes time. And it’s tricky. So it isn’t easy to get your fix.

The hardest thing is the rice. Biryani calls for rice that’s 70 percent cooked. Then you take raw chicken. Toss it in. Finish cooking the rice and hope the chicken cooks. Not trivial. Doable. But not trivial.

It works. But there’s an easier way. Restaurant style.

Restaurants aren’t making biryani for 100 at once and hoping you’ll come in and ask for it. They make it to order. Like everything else in an Indian restaurant. And this is how.

This isn’t stir fried rice. There are a few recipes out there that tell you to stir fry a bunch of stuff. Toss in some pre-cooked basmati. Mix it up. And call it done. This isn’t one of those.

You could simplify it. You could pre-cook the chicken completely. And then just heat your chicken biryani through. But that wouldn’t get the magic. The infusion of flavours into the rice.

I bet that’s what a lot of restaurants do. Just go as fast as they can. But that’s not how I roll. I want it all. I want the taste. The depth of flavour. And I want it fast. Maybe not quite as fast as in a restaurant. But close.

Biryani is about rice. That’s kind of obvious. But it’s about rice that’s infused with flavour. It’s the combination that make the magic.

So plain white basmati isn’t going to cut it. It needs spicing up. That’s not hard. Just a few extra ingredients.

And salt. Please salt your rice. It’s just not going to work if you don’t. This is not the place to watch your sodium.

Nothing to this step really. Just toss the seasoning into the pot. And cook. Easy. But really important. So don’t skip this step.

Chicken biryani gets a boost from chicken stock

I’m going to guess this one is not Indian restaurant standard. It might be somewhere. Probably should be. But I haven’t seen anyone do it. So I’m going to say this one is a glebekitchen special.

The magic in a biryani comes from cooking the chicken in a sealed pot. It’s like pressure cooking chicken flavour into the rice. 15 minutes and half cooked chicken isn’t going to cut it.

So it has to come from somewhere. And that somewhere is chicken stock. Not 100 percent chicken stock though. Just enough to get things going in the right direction.

Traditional chicken biryani has seared chicken that hasn’t nearly been cooked through. That works because the rice can stand a nice long cook. That’s why it’s parboiled.

Restaurant style doesn’t take as long. So the chicken has to be almost cooked when it all goes together. Not a big deal. Just an adjustment in the approach.

And you have the benefit of seriously tasty chicken. So it’s a win-win.

Experienced Indian cooks will notice I leave the yoghurt out of this recipe. That’s not an oversight. I’ve tried this with yoghurt. I wanted to love it. I really did. But it doesn’t work. It blunts the flavour too much. And glebekitchen is all about flavour.

This is probably the biggest difference between a classic biryani and the restaurant version. Bake your biryani. Toss it in the oven and close the door.

Classic biryani is cooked on the stove. Or over a fire. Making it for 100 takes a big fire. Super cool videos on YouTube about that. But building a fire is a little too imprecise for a restaurant. Unless you’re an absolute master like Francis Mallmann I guess.

And they don’t have a hundred burners on their stovetops. But they do have ovens. And you can stack a lot of single servings of biryani in an oven.

Makes sense to me. I use the oven whenever I need consistent, even heat. And consistent even heat works well here.

Make this recipe your own

I worked hard to come up with this recipe. I ate a lot of biryani. A lot. Luckily I like it so it wasn’t too much of a hardship.

In the end I have a technique. That I can use to mix things up. Lamb. Hyderabadi style. Whatever I want.

And you can do it too. I don’t like raisins in my biryani. If you do, toss some in. Want it spicier? A bit of green chili with the cumin seed will fix you up. Richer? Add some ghee to the pot before you put it in the oven.

Whatever you want. Go for it. Make it your own chicken biryani. But make it. Just make it. 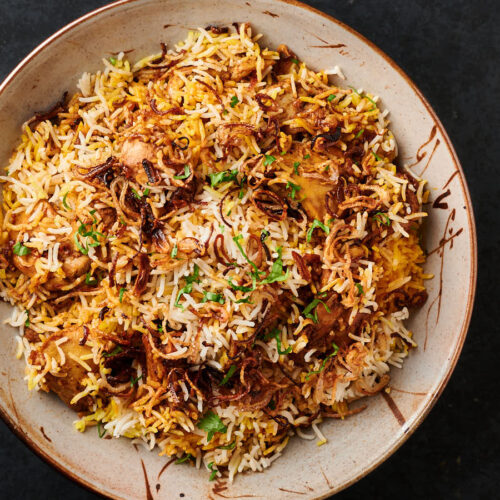 Fried shallots You can buy fried onions if you want to make this easier. But I think they are a big step down. It’s not that hard to make them. Slice the shallots thinly. That’s key. After that it’s just a matter of heating up a half cup of oil in a frying pan. When the oil starts to shimmer add a handful of shallots. Don’t add too much at once. They will bubble up. Pretty sure you don’t want a big grease fire so take you time.  They will start to colour up after couple minutes. When they are a little lighter than you want them transfer them carefully to a plate with a paper towel on them. Use a slotted spoon for this. They will continue to darken a bit out of the oil. Repeat until all your shallots are cooked. Fried shallots keep for a week or two in a tupperware so if you are making anything that could benefit from a few fried shallots make extra. Lots of things are better with fried shallots. Curries. Spicy Asian soups. Any time you want onion flavour and a bit of crunch. Really fast restaurant style chicken biryani This recipe is more about depth of flavour than speed. If you really want to make this dish as fast as a restaurant would, pre-cook your chicken. Have the rice made ahead of time. Follow the cook your chicken step as described. When you add the chicken you won’t have to cook it (it’s pre-cooked after all) but rather just warm it through. Toss the pre-made cold rice in a frying pan with a little ghee until warm. Build your biryani as described but bake it  for about 10 minutes. Skip the resting period or cut it down to 5 minutes. It’s not as quite as good done this way. Not how I would do it given the choice.  But fast. Like a restaurant.