If you want to learn how to make Indian restaurant curries at home this is the place to start.

Indian restaurant curry base or base gravy is the foundation of the whole thing.

Get this figured out and you are on your way to making better  curries than you can buy.

Indian restaurants cook a whack of different curries to order. Ever wonder how they do it?

For sure they don’t have 25 curries simmering away in the kitchen.

Nobody can run a restaurant like that. They have a secret. Indian restaurant curry base.

Curry base is how Indian restaurants can cook to order

It’s cooked to order and it’s done using curry base. Curry base is at the heart of every Indian restaurant kitchen. Giant pots of it simmering away.

Once I heard about it I started asking waiters. I met kitchen staff. Talked about it with a chef or two. I was on the inside. Now you are too…

Never heard of curry base? Not surprising. For the longest time it was a closely guarded secret.

A hint of carrot – ooohhhh. A bit of cabbage – aaahhh. A green pepper – ssshhhh. But that’s how it’s done.

It’s a bit ridiculous. In it’s simplest form it’s just a lot of boiled onions with some spices and oil. Seriously.

Cook it up and it tastes like a weak curry onion soup. Nothing to it. Not particularly tasty.

The magic is in the cooking technique

But when you layer the Indian restaurant technique on top it’s magic. Something wonderful happens to that insipid onion soup.

It caramelizes some. More importantly, the Maillard reaction kicks in. The depth of flavour is – well it’s restaurant quality.

It’s not hard. It’s just a matter of rolling up your sleeves and getting it done. Chop some onions. Add some water and some seasoning and boil. Puree. Boil some more. Done.

You can get a quick lesson on cooking Indian restaurant curry here.

You use this base in recipes like Indian restaurant madras, lamb curry, jalfrezi or chicken tikka masala.

Look around – there are lots of Indian restaurant curry recipes here.

One thing to note. Indian restaurant curries are big on oil. This recipe is about as low as you can go on the oil.

Don’t use less. It just won’t work. Indian restaurant curry is a lot of things but low calorie it is not.

If you want to cook Indian restaurant style curries this the first step. The real deal. 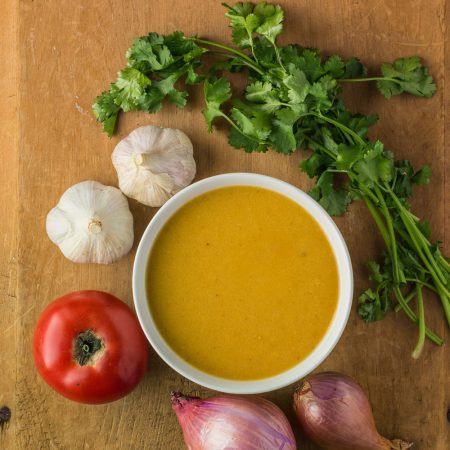 If you don’t want to wait an hour or more during step 2, you can safely stop after 30 minutes – it’s not the end of the world. Don’t worry if you get a bit of “scum” on the surface. Just mix it back in. This recipe makes enough for 10-12 curries (restaurant size portions) Use within a week or freeze in 2 cup portions (one curries worth) 1 cup is 237 ml.

289 thoughts on “indian restaurant curry base”