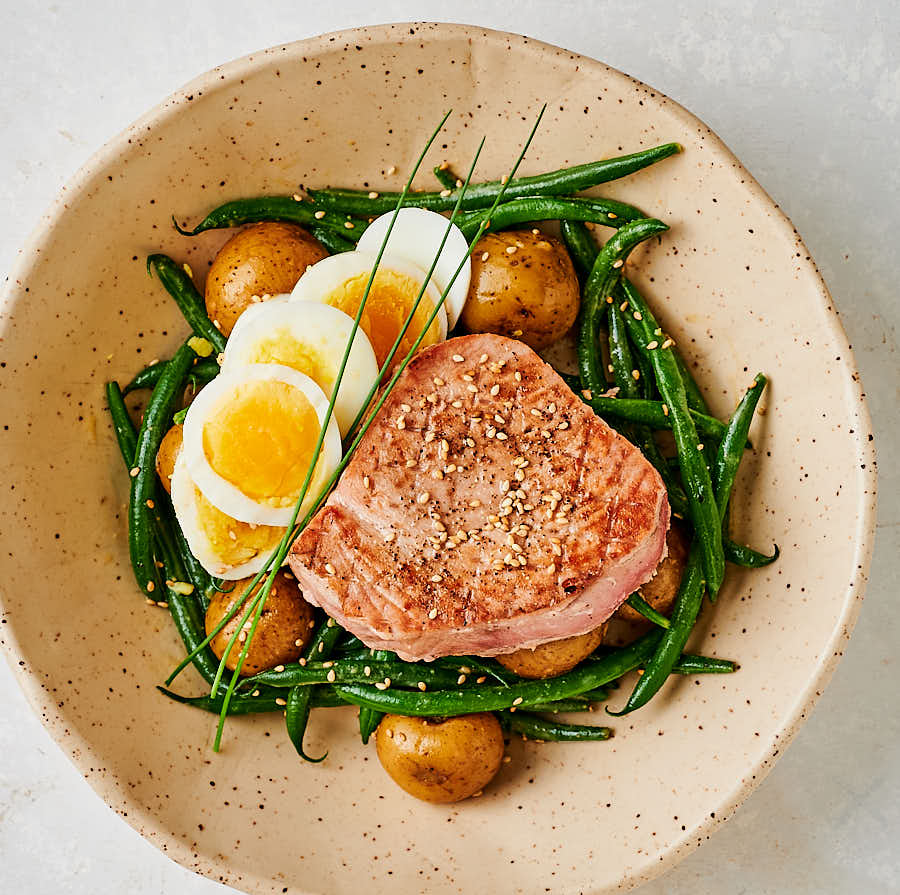 Think beautiful, rare tuna. Little new potatoes. Market-fresh green beans. Perfectly cooked eggs. And a yuzu miso vinaigrette to tie it all together. That’s what Japanese tuna niçoise is all about.

Simple. Clean. Fresh. Delicious. And dare I say it? Healthy. This dish would be on my dinner menu if I had a restaurant. And it would be the star of my lunch menu.

And it would sell. Not quite signature dish level. But it would sell. Because it is all about balance. Everything cooked separately. And brought together at service.

And it’s an actual dish. Google grilled tuna. You get a million recipes on how to grill tuna. Maybe some sort of dipping sauce to go with it. But no plates. No integrated dishes. Just fish. And fire.

And then try googling sides for grilled tuna. You get brown rice. Salad. Potatoes. Come on. That’s not a plate. That’s a jumble of random bits on a plate. No inspiration. Just stuff.

I made this up. I admit it. This isn’t the latest craze. Not trendy. Can’t order it anywhere.

It isn’t even really niçoise. No black olives. No anchovies. Or tomatoes. If I lived in France they would probably deport me for this. For messing with a national treasure.

This one is just tasty. It isn’t the usual slam your tastebuds into submission glebekitchen style. But it works. It works well.

I love a good salad niçoise. Don’t get me wrong. It is one of the truly great salads. Japanese tuna niçoise is inspired by the real deal. It is a testament to it’s greatness. At least that will be my argument at my deportation trial…

Yuzu miso vinaigrette is a bit of magic

Pretty hard to miss the yuzu thing that’s going on these days. So apologies for boring you with this. If you know yuzu skip this section…

Yuzu is a really ugly, incredibly floral citrus fruit. And it’s not easy to find. In fact it’s really hard to find. But you can get yuzu juice. At Japanese and Asian grocers.

Used to be I’d have to beg people to bring it back from Japan for me. Or get it when I was there. Not the fruit though. Just the little bottles of yuzu juice.

Bit of a pain but it was worth it. Much easier now.

But it’s the best I can come up with. Yuzu tastes like yuzu. What does a banana taste like? See my problem?

It’s getting trendy. There’s even a national brand of yuzu ice cream in Canada these days. It’s on menus. Yuzu cheesecake. Yuzu hot sauce. It’s around. Although you may have to hunt for it a bit.

Meyer lemons are a reasonable substitute if you can get them. They are similar. Sort of.

You can try lemon for this recipe. Or a mix of lemon and grapefruit or lemon and orange. Not quite the same but pretty tasty.

Tuna is an interesting fish. Cooked rare it is amazing. A wonderful thing. A thing I just love.

I’d rather eat my boot. And my boot is probably about the same price as a good quality piece of tuna. So please don’t waste it.

If you must have it cooked through just use cheap, bulk frozen supermarket tuna. Six pieces of tuna for around $15. The cheap stuff. I can’t imagine you’ll be able to tell the difference once it’s well done.

That was harsh. I know. Probably alienated a bunch of people. “I’m not making your recipe. You’re a knob.”

And that’s probably fair. But what isn’t fair is destroying a perfectly good piece of fish. So I probably won’t cry myself to sleep tonight.

Seared tuna isn’t hard. And it’s my second favourite way to eat tuna. My favourite? Sashimi. Hands down. No contest. So good.

Second place. Seared tuna. Bit of a distant second, mind you. I love raw fish. Sashimi even. You can keep the rice. I just want the fish. But my wife isn’t such a big fan. So seared it is.

It’s the best of both worlds though. You still get the flavour. Plus you get that seared flavour mixing in. Really tasty. Just not as good as raw. Did I mention raw is my favourite?

Not hard to do either. High heat. Short time. Flip. Shorter time. Done.

You can do it on your BBQ. If you can get it hot enough. Or you can use a frying pan. That works too.

The key is not to overcook it. Err on the side of underdone. Watch the edge of the fish. The side closest to the heat. When the colour change is about 1/8 of an inch up the side it’s time to flip.

Same thing on the other side. It is a leap of faith. But it works.

There is an easy way to make perfect hard-boiled eggs. Not just for Japanese tuna niçoise. For egg salad. Devilled eggs. Cobb salad. Whatever you want.

Pick a saucepan that allows at least an inch of water above the level of the eggs. Put the eggs in the pot. Add enough water to cover the eggs by – you guessed it – an inch.

Bring to a boil, uncovered, over medium-high heat. Turn the heat off. Cover. Move the pan off the element. Wait ten minutes.

This is not a traditional niçoise salad. Not even close. And it’s not really Japanese either. But I made this up. So I can call it whatever I want.

Doesn’t really matter what I call it though. It’s just a fun little dish. Not another recipe on how to grill tuna. A dish that uses grilled tuna as an ingredient.

I did this one for me. So I would remember to make it three years from now. For friends.

It’s not a classic. It’s not even really a thing. Except in my head. And my kitchen. And hopefully in yours too. 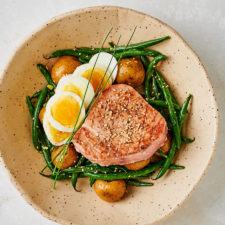 Yuzu is a taste unto itself. There are no direct substitutes. Meyer lemons are close. A mix of fresh lemon and orange is close. So is a mix of lemon and grapefruit. This dish works with any of those or even just lemon juice.