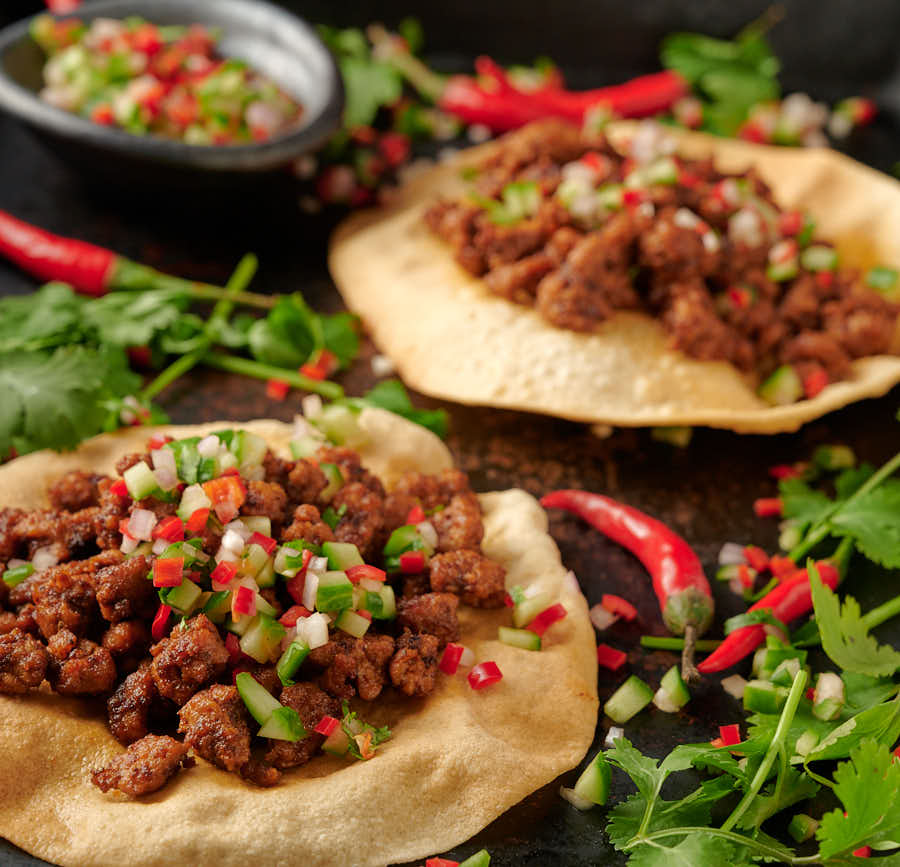 Lamb keema papadum is appetizer you need to put into your arsenal. For when you just don’t want the same old same old. It’s sure to be a huge hit.

And why not? There’s nothing here not to like. Flavourful lamb. Spicy garnish. On a piece of that crispy delicious they call papadum.

Don’t think anyone else is doing this. I’m calling a glebekitchen original on this one. Tell me if I’m wrong.

Lamb keema papadum is a twist on a Mexican tostada

This is a riff on Mexican tostada. That’s exactly what I was thinking when I came up with it. Papadum stands in for a tostada. Kachumber salsa instead of pico. And lamb keema in between.

The flavours are pure Indian though. Nothing Mexican here. Other than the inspiration.

It’s about as hard to eat as a tostada. At least how it’s pictured here. Full disclosure. I was having fun taking pictures. Nobody can eat this as shown. Don’t try. It won’t work.

Let everyone build their own

That’s how you should serve lamb keema papadum. Put out a bowl of keema. Another bowl of kachumber salad. And a stack of papadum.

Let everyone assemble their own bites. A piece of papadum. A spoonful of keema. Some kachumber salsa on top.

It’s a bit messy. So don’t serve this over a white table cloth. Or a black tie event. This is casual food. Fun food. Food to serve your family. Or maybe your closest friends.

I have a thing for lamb keema. It’s just tasty stuff. Don’t know why it isn’t more popular. That’s just a mystery to me.

But there’s no reason not to use it in other curries. Madras is good. Dhansak is really good.

As long as I’m waxing poetic on lamb keema why don’t people serve lamb samosas. Where I live there’s chicken or beef. Or vegetarian. No lamb? Why?

It feels like I’m getting fed on an airplane.

Next time you order samosas, ask for lamb. Time lamb lovers of the world stood up together. Demand better!

Lamb keema papadum is perfect when you don’t want to fuss too much at the last minute.

Make the keema ahead of time. The day before even. The kachumber salsa will keep a few hours anyway.

So all you have to do is fry up some papadum. Heat up the keema. Put it on the table. And listen to everyone rave.

It’s a little different. Out of the ordinary. Something new. But I wouldn’t have it any other way. Would you? 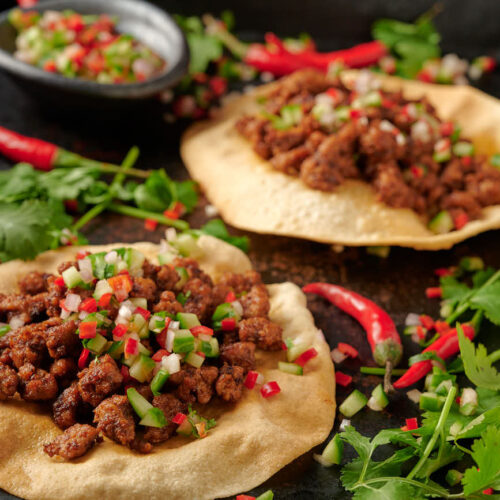 Keema on a papadum may not be familiar but it makes a great party appetizer. And you can prep everything except the papadum ahead of time.
Course Main
Cuisine Indian
Keyword keema, lamb keema
Prep Time 20 minutes
Cook Time 20 minutes
Total Time 40 minutes
Servings 6
Calories 274kcal
Author romain | glebekitchen

Make garlic ginger paste from scratch at home. The pictures in this post have nothing to do with reality. It’s real lamb keema papadum. Don’t doubt that. But what I took pictures of is impossible to eat. It will self destruct after the first bite. Looks good though, doesn’t it? I was having fun. Serve the keema in a bowl. Serve the kachumber salsa along side. Fry up some papadum and let your guests break off pieces and build there own bites.