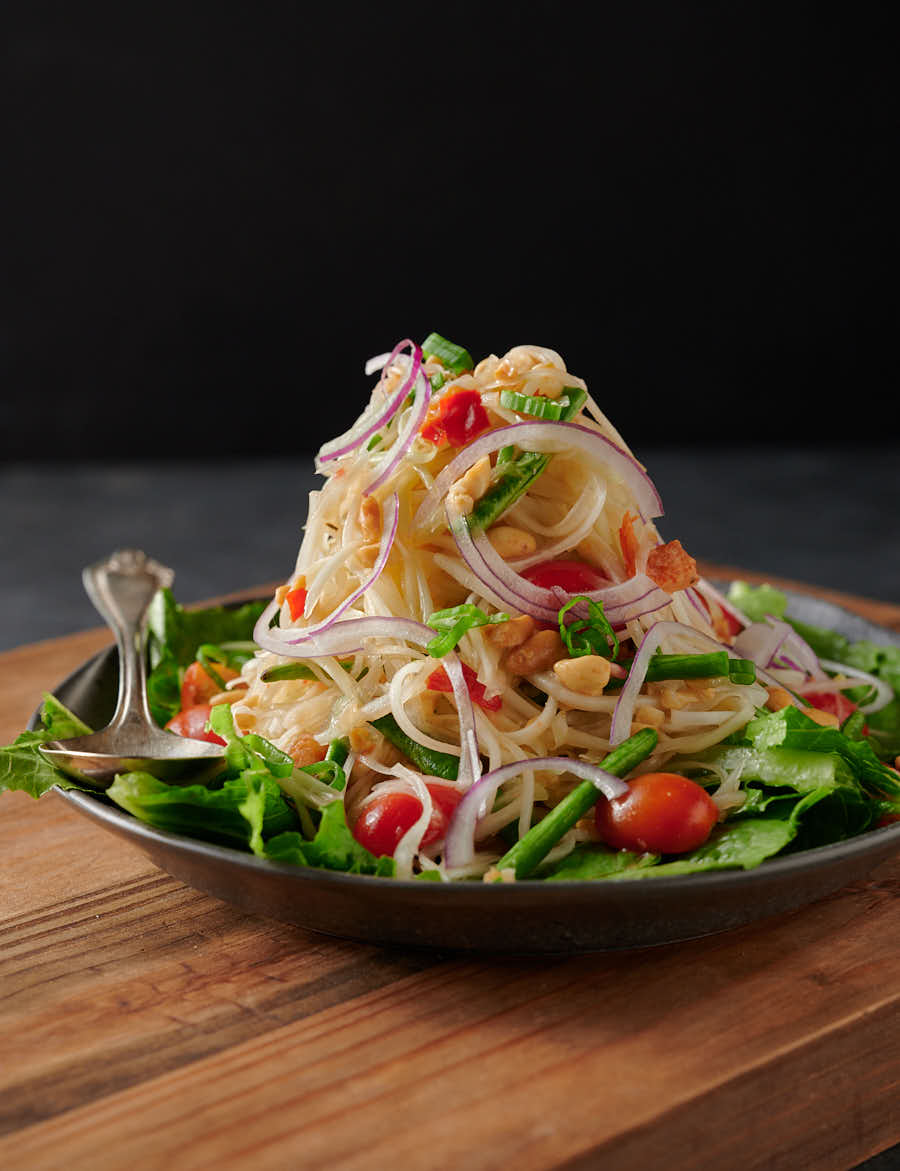 That’s a lot of hyperbole. So I would expect you to doubt me. I would doubt me. But it’s so good. I could drink the dressing. Seriously.

It absolutely shines with anything grilled. Or roasted. Fish. Chicken. Pork. It all just works.

Or try it with shrimp poached in a tom yam style broth. That’s dinner right there.

You can get green papaya at just about any Asian market. At least where I live. It will be in with the produce.

It’s football shaped. Green skin. Should be firm. Not blotchy. No soft spots. Like a green mango.

Green papaya doesn’t taste like ripe papaya. It has none of that funky smell or taste. Might as well be a completely different fruit. Whatever you do, don’t use ripe papaya for som tam. It will not be good.

While you’re at the market ask for a Kiwi brand papaya shredder. It costs about five bucks and it makes shredding papaya a snap.

It’s great for carrots. Cucumber. Anything you want shredded. If you like to cook Thai or Vietnamese you need one of these things. I’m not a kitchen gadget lover. But this thing is worth the space it takes.

Use a mortar and pestle for great som tam

Papaya salad is called som tam in Thai. Som is “sour” and tam is “pounded”. So a mortar and pestle is kind of a given.

In Thailand they have these great big mortar and pestles. Big enough you can make the whole salad in it.

That’s a pretty specialized bit of kit. If you have something like that by all means use it.

I don’t have one like that so I’ve adapted the recipe to work with a smaller version. If you don’t have a mortar and pestle you could try a small food processor.

But the smell of freshly pounded Thai chilies and garlic while you pound them. That alone is reason to get one. Plus I don’t see how you can bash up the long beans or bruise the papaya without a pestle so…

Papaya salad doesn’t have to be crazy spicy

I like medium spice. Enough to wake up my tastebuds. But not enough to hurt. Not bland. But not blazing.

Balanced flavours is the way I like to think of it. I almost never want the fire to be the first and last thing you taste. Almost never.

Sometimes the endorphin rush you get from palate searing spicy is fun. In a masochistic sort of way. But generally I want people to enjoy. So I don’t go crazy.

It’s up to you of course. Papaya salad the way you like it. One Thai red chili has decent zing. Strip the ribs and seeds out and it’s still not bland.

There’s nothing in this salad to temper heat. No fat. So the heat builds. And build. And builds. Keep that in mind. If your friends aren’t chili heads be careful. Don’t say you weren’t warned.

Every ingredient adds something

This is Thai cooking. It’s a layered cuisine. I think that’s why I like it so much. It’s like Indian that way. Many, many flavours coming together to make magic.

So don’t leave things out. Every ingredient matters in papaya salad.

Tamarind is like nothing else. It adds a delicate sour taste. Mellow against the exuberance of lime. It’s a nice touch.

Fish sauce is the backbone flavour. If you don’t want to use fish sauce don’t make this recipe. In fact, give up on ever cooking Thai or Vietnamese. Soy sauce is not the same as fish sauce. No matter what it says on the Internet.

Dried shrimp. That’s really why I wrote this paragraph. If you like shrimp and you like salt you will be OK with dried shrimp.

Don’t be afraid. I’d say they are less challenging than fish sauce. A nice meaty umami bomb in the salad.

Worst case you can eat around them. Best case you’ll get it. And next time you see a recipe that calls for dried shrimp you’ll go for it.

Serve som tam as part of a Thai meal

Papaya salad isn’t meant as a course. That’s a western perspective. Serve it up a side. Along side some rice.

My absolute favourite is with grilled chicken. Something with big flavours. Lemongrass. Garlic. Pepper. Some sweet Thai chili sauce on the side. That’s what I’m talking about. A happy place.

Papaya salad. Som tam. Doesn’t really matter what you serve it with. Just serve it. Your taste buds will thank you. And so will your friends. 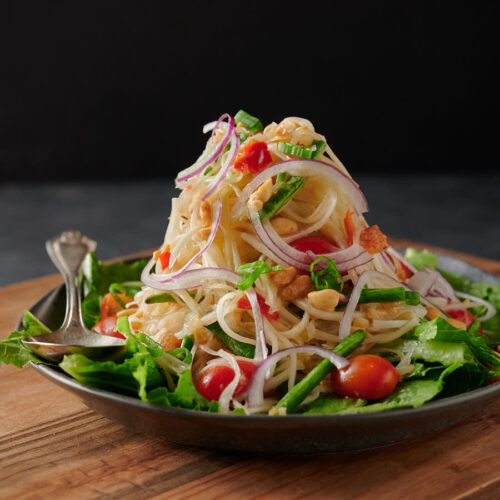 Kiwi brand julienne slicers are how you get the finely shredded pieces you see at Vietnamese and Thai restaurants. I am not a gadget fan. I do not derive any benefit from mentioning brand names. In fact, I’m pretty strongly opposed to doing it. But I’m doing it here. Because I love my little slicer. Ask for it at your local Asian grocer. It costs $5 and it takes up no room in the kitchen.