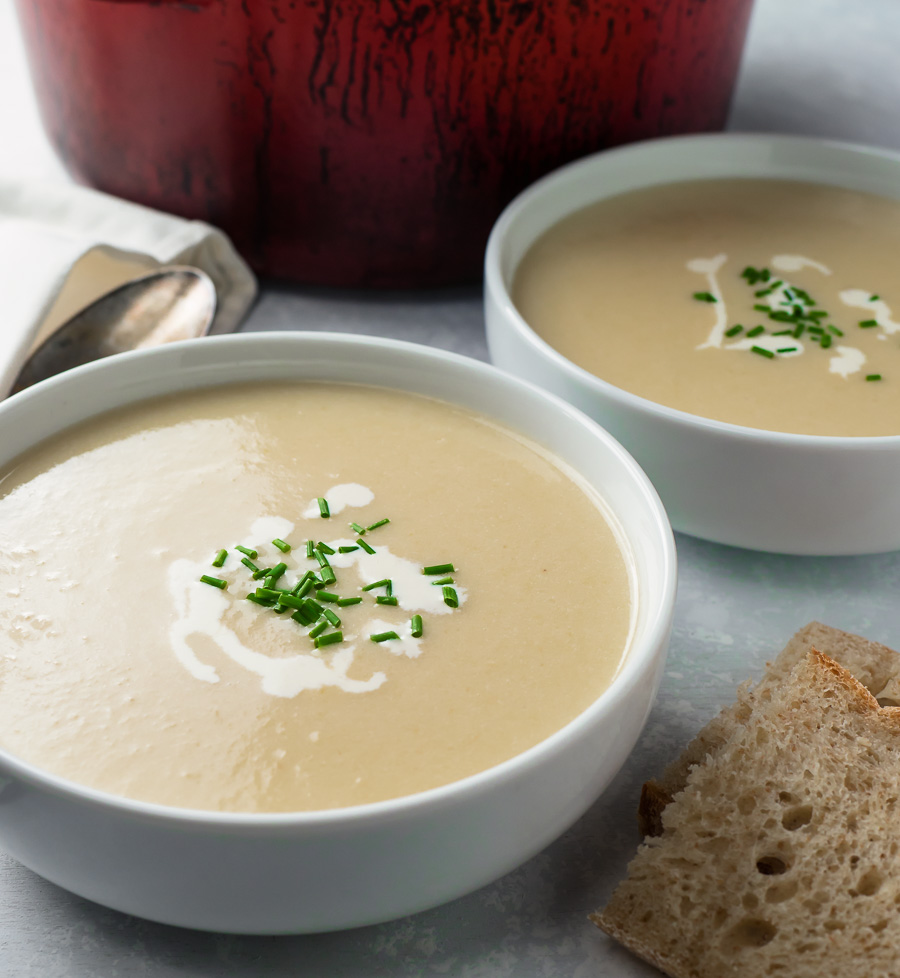 Potato leek soup. So good. So easy. Something wonderful from the simplest of ingredients.

Potato leek soup is one of my favourite soups of all time. There is something magic about taking such basic ingredients and creating a dinner party worthy dish.

Potatoes. Leeks. Onions. Stock. Cream. Butter. Salt and white pepper. Nothing to it. But put them together. Wow. That’s the magic of cooking. It’s why I do it. No flour. No cornstarch. And no thickeners other than the potato. The real deal.

I know. Seems a bit poetic for a basic potato leek soup. But it’s satisfying. Everybody loves it. Really, really good. 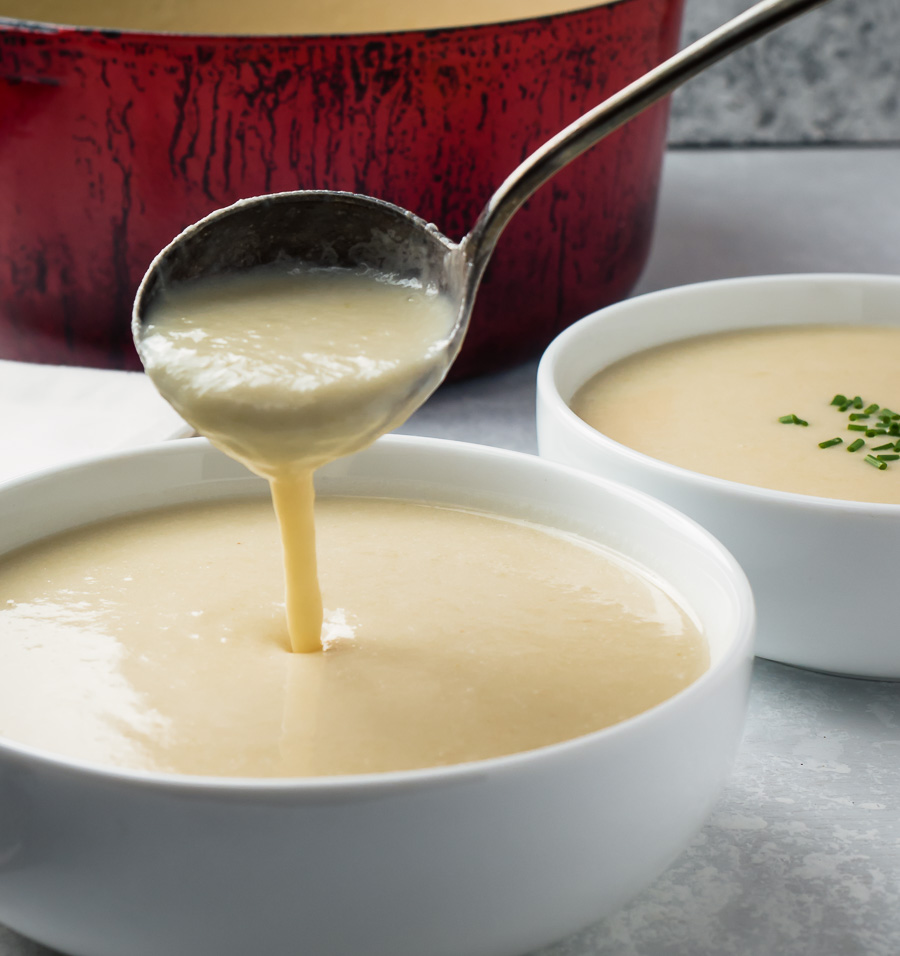 Choice of ingredients matters here. You want a floury potato. Russets work really well. Waxy or even semi-waxy potatoes don’t work at all. The texture sucks. Kind of gloppy. Or lumpy. Or both.

You want leeks with lots of white. Don’t put the green parts into your soup. You’ll get a funny green leek potato soup. Not the creamy white with just a hint of green. You eat with your eyes first.

Technique is important. That’s where the magic is. Take your time making potato leek soup and it will be great. Rush it and not so much. 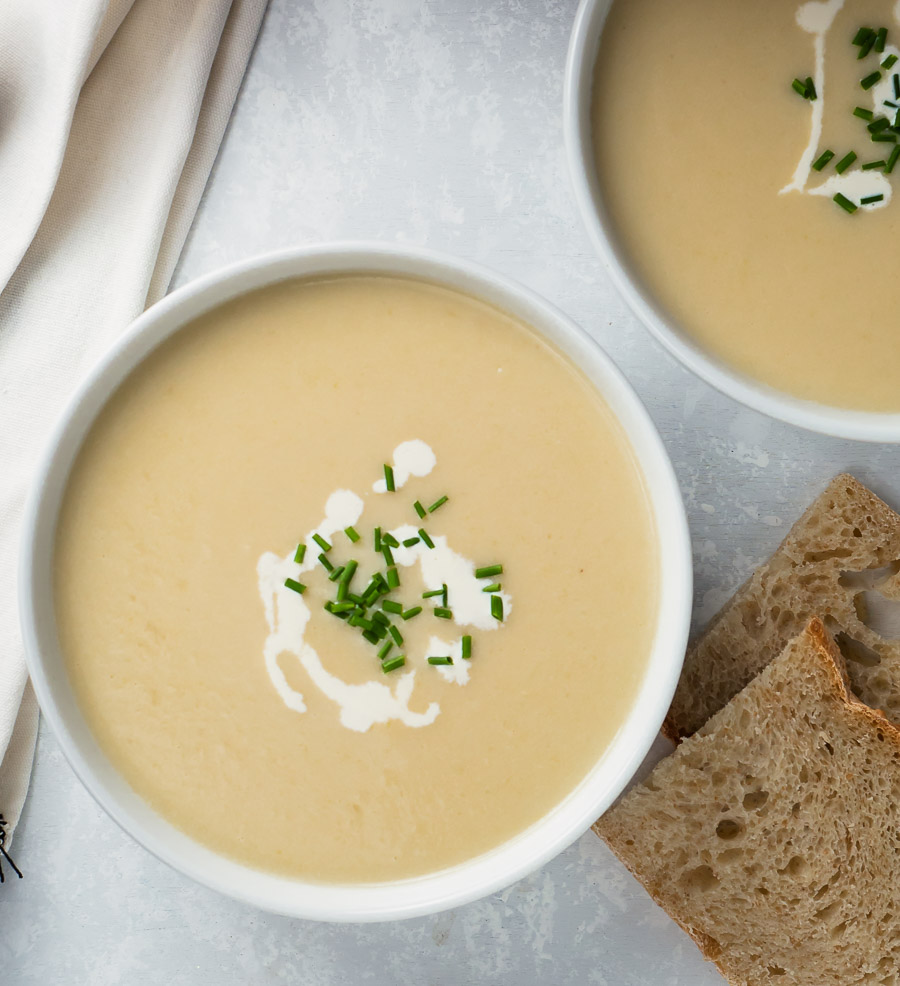 Don’t let the onions and leeks brown. That throws the flavour you are looking for. Too strong a taste. Potato leek soup needs to be delicate. Balanced. 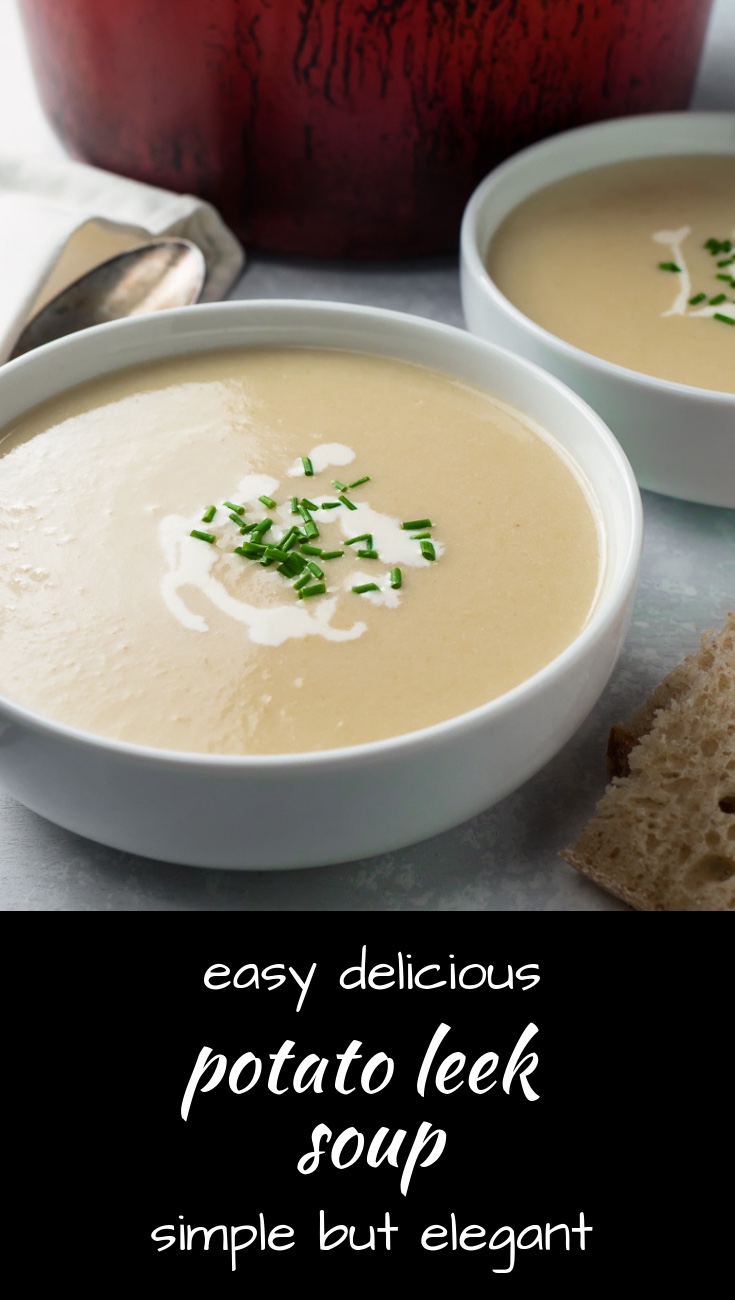 Once the onions and leeks are soft it’s easy. Toss in the potatoes and the stock. Add a bit of salt. Simmer until the potatoes are fully cooked. Easy to pierce with a fork.

Puree the soup in a blender in batches. I don’t like an immersion blender for this. Too hard to get all the bits of leek. Nobody like little bits in this soup. 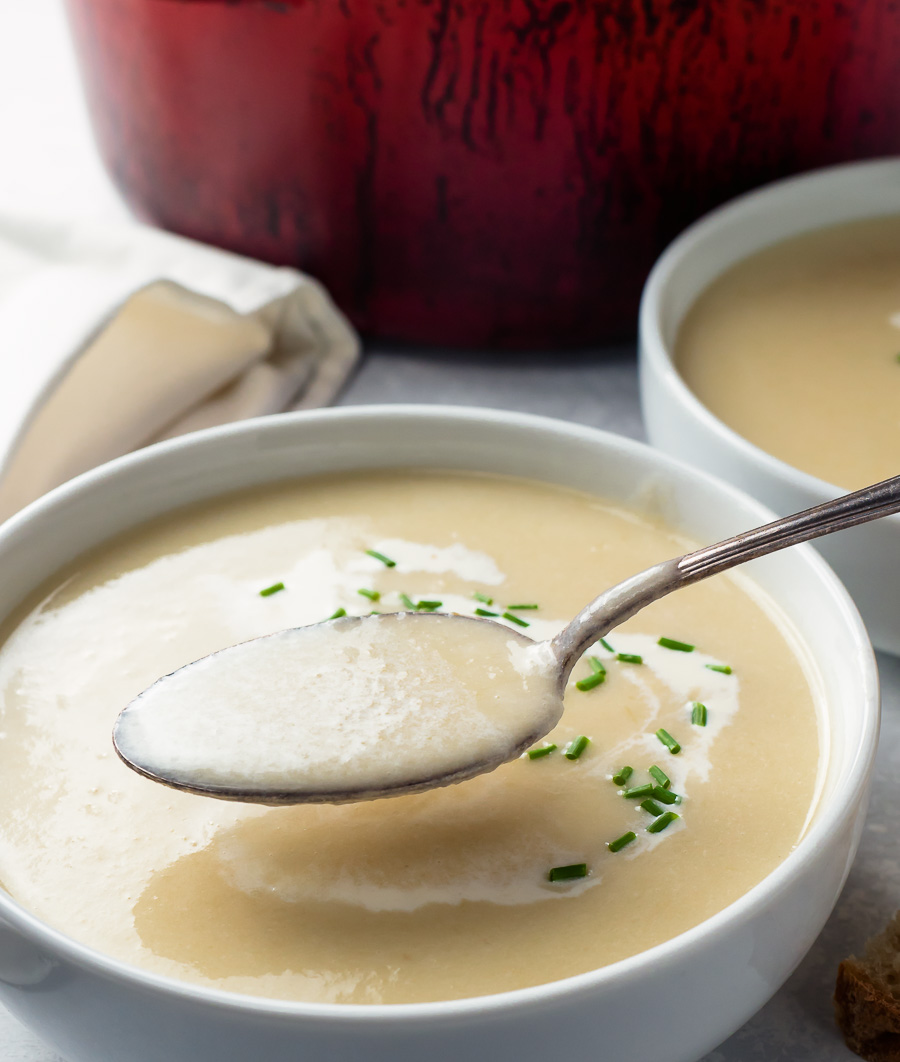 It’s easy to time this soup

At this point you can stop until dinner time. Let it sit on the stove while you cook the rest of the meal. When it’s time to serve, reheat the soup to a simmer.

Long time readers of glebekitchen will note that this is a re-tread of an old, old post. I wanted to redo it with better instructions. Nicer pictures. Try to convince you to make potato leek soup.

As with the original adding a bit of truffle salt take this soup from fantastic to extra-ordinary. If you want to make a soup that knocks the socks off your guests, that’s how. People selling truffle salt often try to tempt you with this combo. If that doesn’t convince you…

Potato leek soup. Simple, straightforward ingredients. A bit of technique. And at the end. Magic. 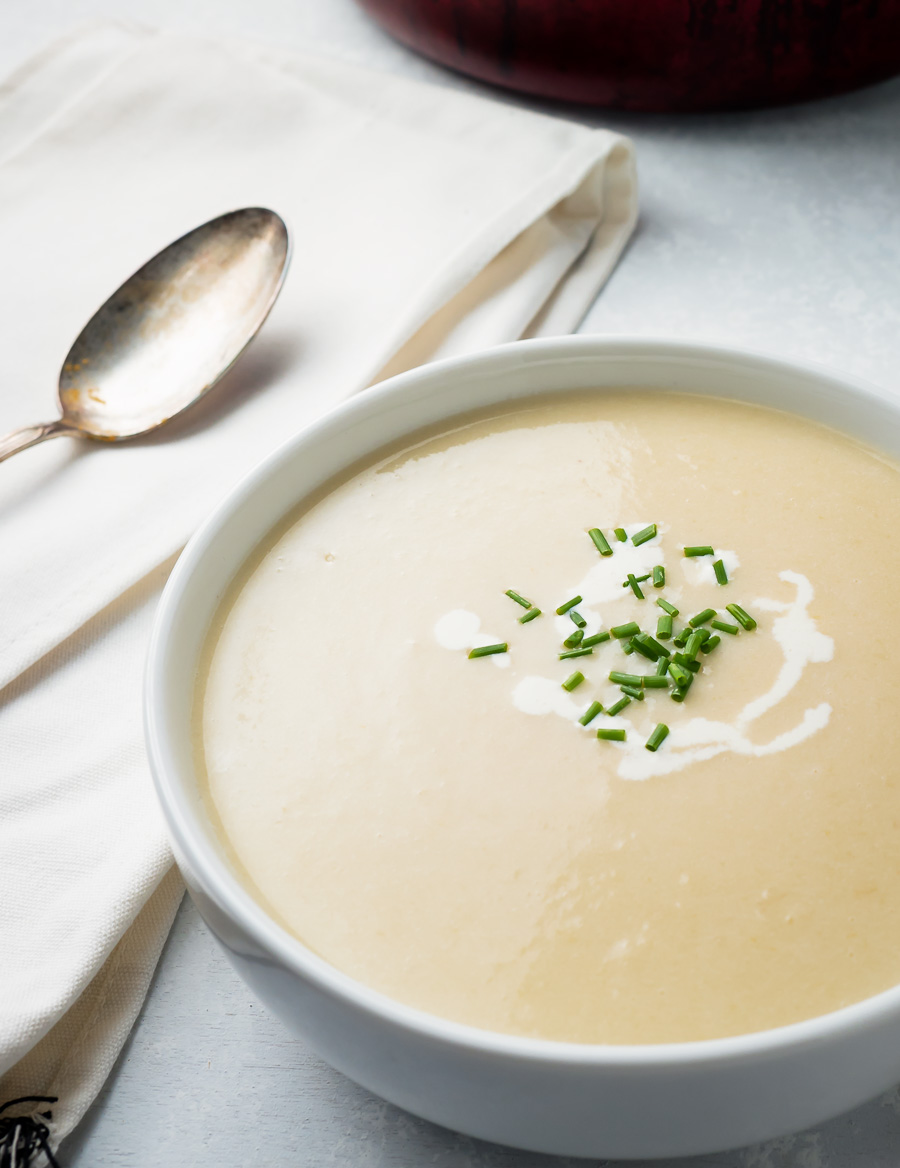 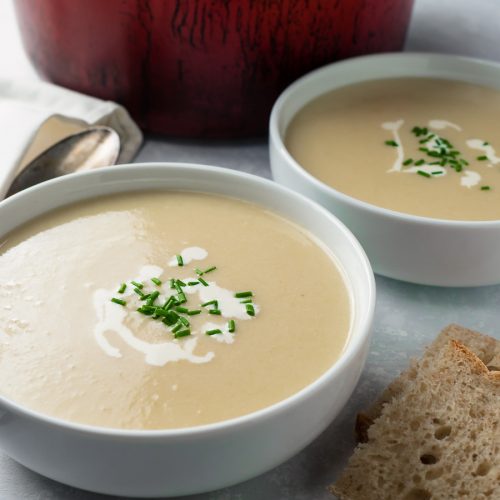 If you can get your hands on fresh sorrel this is a nice flashy variation. Sweat some sorrel in butter. Follow the recipe above but omit the truffle salt. Puree the wilted sorrel in a bit of soup to make a sorrel puree. Ladle the soup into the bowl and then spoon some of the sorrel puree into the middle of the soup. Cut through the circle with a knife to drag the green sorrel puree through the white leek and potato soup. Prepare for adulation from your dinner guests and serve.