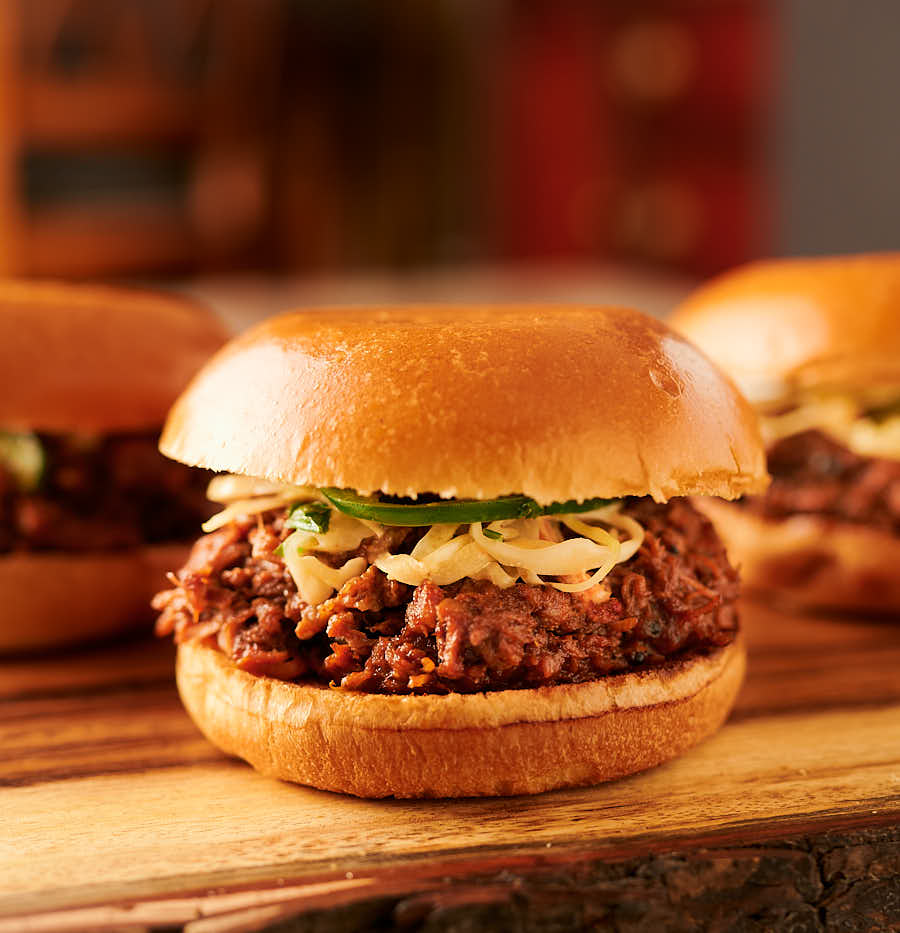 Every now and then I do a post just for me. So I don’t forget. This is one of those times. Pulled pork vindaloo. Just because I love it.

It’s not mainstream. Not yet. But it could be. Should be I think. If you like vindaloo. And you like pulled pork. Then this one is for you too.

This is not some sort of new curry. It doesn’t go with rice. I don’t want to see this on my plate with dal.

It’s not really Indian at all. There’s no epic and storied history of pulled pork vindaloo food trucks in India. That I know about anyway.

This is Indian-ish. Sort of Indian. Not traditional. Pushes things into the mainstream. Brings all those incredible flavours home.

The flavours are Indian inspired. The execution is not. Pulled pork on a bun. Not chapatis. Not naan.

On a bun. Bread. Vindaloo pulled pork. Lots of it. A drizzle of sauce. Slaw for crunch. That’s what this one is all about.

Like a funky pav. East meets west. In a crazy tasty smash-up of flavour. A head on collision of delicious.

Time to give Indian food the glory it deserves

I’ve been ranting about formula Indian for a long time. I won’t bore you with it again.

Except to point out that just about every Indian restaurant serves the same stuff. Which makes no sense that I can see.

Indian food is incredibly diverse. A billion people. Eating the same 20 dishes. How does that make any sense?

People are starting to wake up. To realize there is more to Indian cuisine than the same 20 dishes you see on every menu everywhere.

Chefs are starting to think. And do. All over the world.

I am thrilled. Seriously. Unbelievably excited. So I’m trying to do my little bit to help it along. Indian-ish. Expect more of it here. And hopefully at a restaurant near you.

This is slow food. Gentle heat. A long braise. Weekend cooking. For when you are just hanging out. When you have a few hours to kill. And want to kill it making something wonderful.

I like to run the oven at around 300F or so for this. Kind of like making BBQ.

Without the smoke. And with a whole bunch of kashmiri chili and garlic and ginger and spice. In a sealed pot. With liquid.

OK – the only thing this has to with BBQ is the temperature. And in fact it’s a little hotter than I run my smoker for pulled pork.

But you get the idea. You want to keep things gentle. To get that pulled pork mouthfeel. The magic.

Internal temperature is the key to success every time

I’m a huge fan of instant read thermometers. Huge. Use one and you are cooking with science. Don’t use one? That’s called guessing.

Random. Hope for the best. Poke the meat with your finger and decide. I’m not that good. So I use a thermometer.

It serves me well. I use it every day. And it’s key for pulled pork vindaloo.

Roast pork shoulder is great around 140F. Up to 150F maybe. Relatively high heat. Crispy on the outside. Juicy on the inside. Wonderful stuff.

Push it much past that and it all goes sideways. Dry. Tough. Not good. Unless you cook it low and slow. That’s the magic of the braise.

Anyone that knows real BBQ knows this. That’s just how it works. For BBQ. And for this pulled pork vindaloo.

You can look into it. Learn a little food science. Or you can just go with it. Know that it works. And enjoy.

The magic number for pulled pork vindaloo is 200F. May sound crazy. But it’s true.

Pulled pork vindaloo is not run of the mill vindaloo

This is not a curry. I want to be clear. Not a curry. It’s pulled pork. With Goan flavours. Indian-ish. Not Indian.

It has all the hallmark flavours of a classic vindaloo. Pork. Vinegar. Chilies. Garlic. Ginger. Spice.

But it also has sugar. And tamarind. And curry leaves. The vinegar is cider based. The sauce has this tangy, sweet and sour and tomato thing going on. Think spicy Indian BBQ sauce.

Which makes perfect sense to me. Remember. This is pulled pork vindaloo. Indian-ish.

Indian-ish slaw for the win

When I think pulled pork I think 3 things.

Pork – well sauced pork. Lots of that going on here.

Bun – I’m going against the rules. I like brioche. Buttered brioche even. Purists will not be amused. But I’m making vindaloo pulled pork. So I’m taking liberties left and right.

Slaw – for me a pulled pork sandwich has to have slaw. For texture. Crunch. But more importantly a fresh counterfoil against rich, spicy pork.

But not just any slaw. It has to fit. Indian-ish pulled pork needs Indian-ish slaw. A little creamy. A little spicy. Just the right crunch.

That’s probably the silliest heading I’ve written so far. Humour me a bit.

There are some interesting ideas out there on what vindaloo is about. What it’s supposed to be.

The one I hear the most is wine and potatoes. That makes for amazing European stews. But not a great vindaloo.

The French word vin somehow becomes Indian. So that’s the wine. And aloo is potato in Hindi so aloo must mean potato here too. Except it doesn’t. Not a bad theory I guess. But wrong nonetheless.

Vindaloo has its origins in Goa. And its roots came with the Portuguese. Vindaloo is an evolution of a Portuguese dish called carne de vinha d’alhos.

That’s hard enough to write fighting a spell checker. Imagine how well it went over in India in the 15th century. Vinha what? D’alwho?

Vindaloo is way easier to say. So that’s what stuck I guess. Or evolved to.

If it’s not obvious – my tongue is firmly in my cheek. I have have no idea what happened 600 years ago. Just having fun with a mental image.

Fun fact. The Portuguese also brought chilies to India. Thank you. We all owe you large.

That’s a western perception. Propagated by restaurants. The real deal is balanced. Nicely spiced. And so is this pulled pork vindaloo.

This one is all about flavour. Tasty. That’s all I care about. Tasty.

You can make it spicier. A little extra hot chili powder will do it. A bit of naga pickle would be better I bet.

But I’d think about just making it as is. It’s Indian-ish pulled pork. Hellfire not required.

But as always make what works for you. What makes you happy. I’m here to try to get you into the kitchen. Not to tell you what you like. Well, not much anyway.

This is party food. Fun food. Perfect for feeding a hungry crowd. Easy to make ahead.

And a little different. Not Indian. A little unexpected. Familiar. Funky. And really, really tasty. 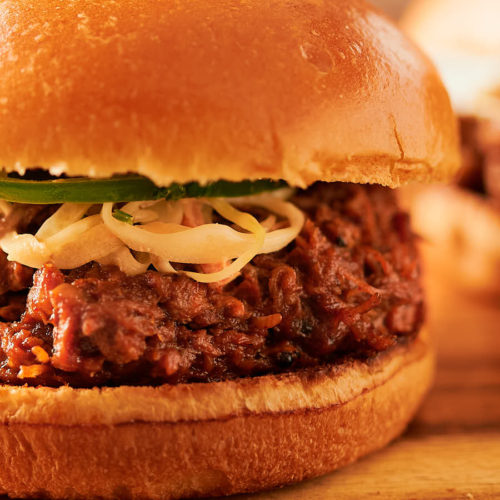 Get the braise ready