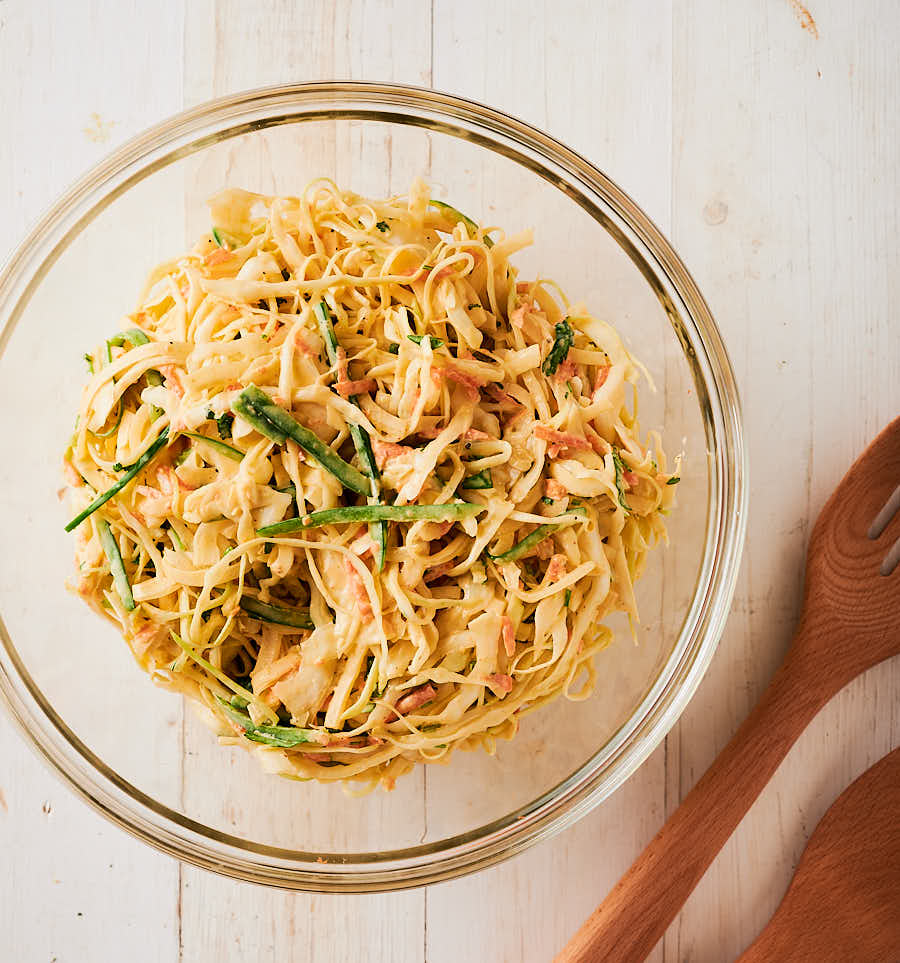 Indian slaw. A big mess of creamy wonderful. Cabbage. Jalapeno. Onion. Tangy spiced yoghurt mayonnaise dressing. Nothing not to like.

Except this isn’t Indian. Not authentic. Not even a little.

I’ve been thinking lately. There’s this class of recipes. Doesn’t quite fit. Not Indian. Not fusion. Indian inspired.

Indian-ish. That describes it best. That’s what I should call this recipe. Indian-ish slaw. Except nobody would find it.

I put nine solid seconds into coming up with a better name. Before I gave up.

Indian-ish has been popping up on glebekitchen for a while. Not new. Just took me a while to see it. Fell into it. Subconsciously. And I’m so happy I did.

Tandoori BBQ shrimp. Definitely Indian-ish. Indian spiced wings. Pretty sure they qualify. Lamb keema papadum? That’s a riff on a tostada when you think about it. There are others. Poke around a bit. You’ll see.

I’m liking it though. Now that I’m thinking about it. It’s a fun concept. And I have lots of ideas.

This recipe is a side. But it’s also a key ingredient in the next dish I’m doing. That one’s already mostly written. Expect it soon.

Things that go with tandoori chicken

I love tandoori chicken. Addicted to it. Have some cooking as I type. It’s my kryptonite. My weakness. One of many to be sure. But still…

Tandoori chicken. Over charcoal. Something I want to share. With friends. A tandoori chicken cookout. Under the stars. The quintessentially backyard BBQ.

Meat over fire. Potato salad. Corn on the cob. Slaw. See where I am going with this? Sides are a bit of a challenge. Dal and rice aren’t really cookout friendly.

I could do buttered chapatis and kachumber salad. That works. That’s what my parents served. Indian. Through and through. Near and dear to my heart.

But I want to do this more than once. So I need options. To mix things up. Variety. Don’t want to bore my guests.

I have a killer slaw recipe. Unbeatable. I think anyway. But it’s vinegar based. Tart and sweet and wonderful. But not right with tandoori chicken. Not right with anything Indian.

I needed to come up with something else. Something that works. For tandoori chicken. For anything tandoori. And that something is Indian slaw.

Look at the ingredients. Some Indian. Some not so Indian. But it works. With tandoori. Which is the whole point.

Mayonnaise doesn’t come up a lot in traditional Indian. Super useful when you are cooking Indian-ish though.

It’s a secret weapon at funky Indian restaurants. Seriously. Took me forever to figure that out.

But now I’m watching for it. I’m seeing it more and more. That amazing creamy dip at your local nobody can figure out? Try adding a little mayo.

Mustard powder is another oddball. Mustard seed is huge in Indian. But mustard powder? Not so much.

It’s a staple for coleslaw dressing though. Coleslaw and mustard powder are soulmates in my kitchen. So in it goes. And it matters. Makes a difference.

Jalapenos aren’t particularly authentic either. I like a little green pepper in my coleslaw. Jalapeno is like green pepper. Only better. So I couldn’t resist.

And in case you’re wondering. Jwala chilies are my go to fresh green chilies for Indian. They suck here. Don’t try it. Trust me.

Slaw is funny. And Indian slaw is no different. Cabbage needs time. It needs to soften. Wilt a bit.

This isn’t a bang it together and eat recipe. There’s a lead time. And it’s pretty important.

Toss the dressing with the cabbage. And you get cabbage with dressing.

Wait four hours. You get slaw.

Wait a day. You get really good slaw.

Your call. I like really good slaw. So I plan ahead.

Ready for your Indian backyard BBQ?

Friends. Food. Fire. How can you go wrong?

And it’s skinless. So you can load your barbecue with tons of chicken. No need to let the fire department know ahead of time.

I don’t have an Indian potato salad. Not yet. But I do have gunpowder potatoes. Grilled potato goodness. Definitely another one to add to the Indian-ish list.

And Indian slaw. To round things out. A little crunch. A perfect counterpoint to the chicken.

Now all I need is a riff on corn on the cob. Cobs doused in butter and dusted with salt and Kashmiri chili powder. That will do for now. Might try a little chaat masala next time. I’ll let you know.

Think about tandoori chicken with Indian slaw next time you’re planning a cookout. It’s fun food. And food should always be fun. 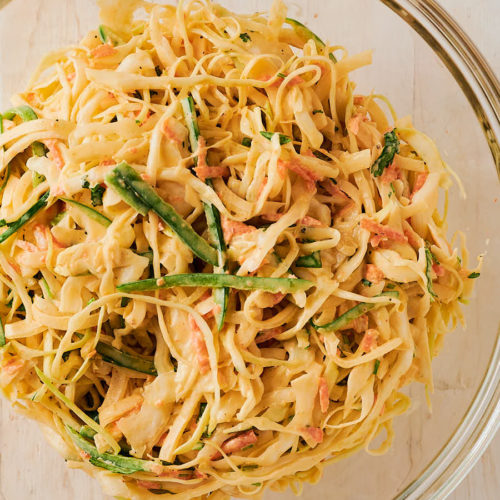