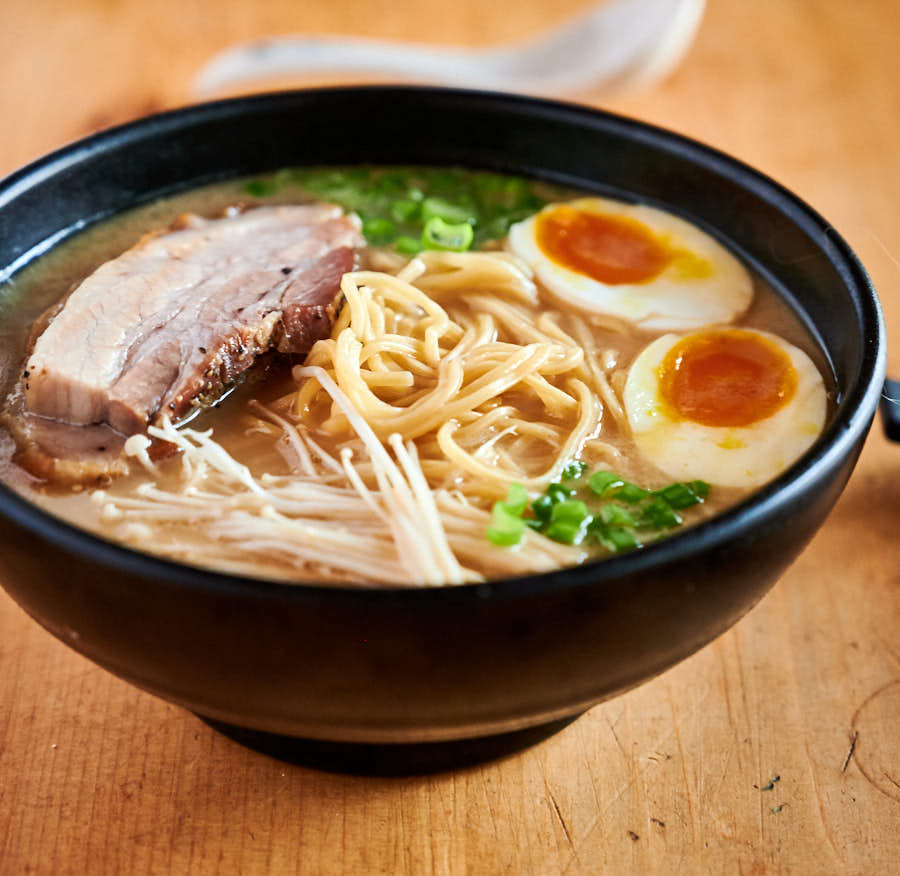 Making tonkotsu ramen at home is truly a labour of love. This isn’t some 15 minute miracle insta-ramen recipe. This isn’t even some one day recipe.

Making authentic tonkotsu ramen takes time. It takes effort. You have to be a bit crazy to go there. But it’s so good. It’s totally worth it.

There are restaurants in Japan that do nothing but make tonkotsu ramen. Just big wonderful pots of the most amazing broth.

Perfect noodles. Silky eggs and unbelievable pork. I’ve had it. And I love it.

This recipe may not quite hit the level of Japanese ramen making. People have devoted their whole lives to mastering the art.

But it’s pretty damn good. And it’s way cheaper than a plane ticket to Narita.

There are five major ingredients

Tonkotsu ramen has five major ingredients. Broth. Noodles. Pork. Egg. Tare. Each is important and each takes some doing.

Tonkotsu broth is the heart and soul of any tonkotsu ramen. It’s not difficult but it takes time – 12 to 18 hours. Mostly unattended but you can’t rush this.

You can make lots and freeze it though. Two bowls or twenty. Doesn’t matter at all as long as you have a big enough pot.

The noodles are key

The noodles are the backbone. Noodles were where I struggled the most. The fresh ramen I can get in town sucks. Like really sucks.

Ramen noodles are different. They are alkalinated. That’s a fancy way of saying you put baking soda in the dough.

If you can’t find any, another trick is to boil spaghettini or capellini in 8 cups of water with 2 Tbsp of baking soda. That works too.

The pork is called chashu. It’s marinated pork belly and it’s magic stuff. I do mine sous vide for 11 hours at 170F. Conventionally cooked chashu recipes are all over the internet.

The eggs and the seasoning

Medium boiled is about a 7 minute egg. The whites are firm. The yolk are just barely set.  Just so good.

The tare is the flavour base. This is where you take your ramen in your direction. It can be as simple as salt or as complicated as bacon infused sweet soy miso tare. Up to you.

Pull these 5 elements together and you have wonder in a bowl. If you don’t understand why you’re reading this and think I’m crazy google the best ramen joint in your town.

Go taste for yourself. Then judge me. It may seem daunting but it’s a few manageable steps. Totally doable if you want it bad enough.

This is adapted from several recipes from the internet. The soy bacon tare is a based on David Chang’s Momofuku Tare 2.0.

The chashu pork marinade is from Serious Eats. The tonkotsu ramen broth is the best of a bunch of recipes on the net.

Tonkotsu ramen. It’s real work. But it is so worth it.

Update: Since I wrote this post I learned how to make Momofuku pork belly. If you’re interested I actually got a lesson in the kitchen at Momofuku Las Vegas. So I’m pretty sure it’s the real deal.

I still love the sous vide chashu pork belly and make it regularly. But the Momofuku pork belly is really good too. And you don’t need a sous vide to make it.

I’ve taken new pictures since this was first published. The new pictures have the Momofuku pork belly in them.

So if you make chashu pork don’t be alarmed if it looks different. It is different. I cannot decide which one I like better. 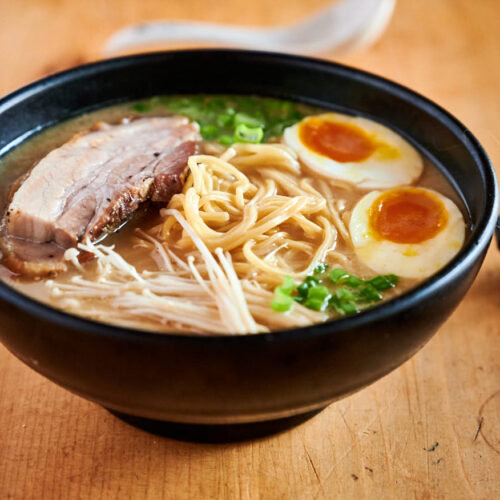 I’ve provided 2 different tare recipes. Use one or the other or come up with your own. If you use the miso tare, you can salt your broth directly. That is easier than guessing how salty you want your tare. If you aren’t up for making chashu pork you can substitute roasted pork shoulder. It would be an awesome use of leftover pork roast…   The recipe for tonkotsu ramen broth can be found here.

138 thoughts on “tonkotsu ramen at home”