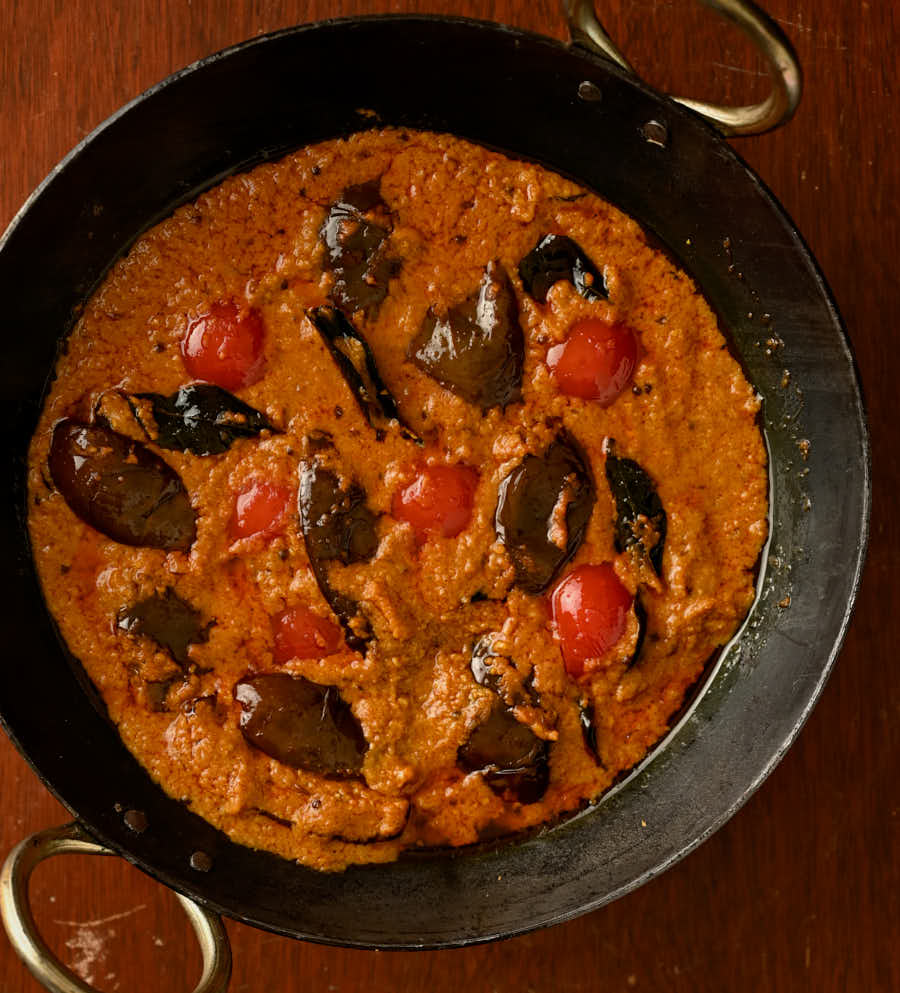 It’s serious fare. Big enough to be the star. The main attraction. Unless your idea of a vegetable is the potatoes next to your steak.

If you can handle eating a carrot. Or a slice of cucumber. If you have any omnivore tendencies at all. Then maybe this will do it. It does for me.

Doesn’t really matter though. Makes a great side dish. Try it that way. Maybe it will convince you.

Bagara baingan hails from Hyderabad. And it brings some big South Indian flavours.

Except this isn’t traditional home cooking. This is how I would make bagara baingan if glebekitchen was a restaurant. I would be going for broke. The biggest flavours.

Because that’s what glebekitchen is about. Maximum taste. Even if it means bending the rules a bit.

I’m going for upscale restaurant here. If you’re looking for bagara baingan like your mom makes this isn’t it. I would love to try your mom’s version though. I love Indian home cooking. A lot.

If you’re new here hotel style is a twist on restaurant style. Think of it as restaurant cooking. At really good Indian restaurants.

This is not typical takeaway fare. It’s not completely different though.

There’s that lush sauce. Have to have that. But that sauce has more depth of flavour. That’s built into the Indian hotel gravy. The gee whiz here.

Hotel style is easier when you actually cook your curries though. And it’s less mess. No spatter. More flavour. Did you catch that? More flavour.

That’s a tradeoff I can get behind. But don’t get me wrong. I love restaurant style as well. I go both ways. And yes, I meant to say that. Hotel and restaurant. What were you thinking?

That’s the secret here. A ground nut paste. It makes a difference. A big difference.

There’s real mouthfeel here. Coat your tongue tasty. Satisfying. The richness of the nuts are what moves bagara baingan into main course territory.

There’s a lot of spice in this dish as well. More than usual. Even for a hotel style curry.

Don’t let that throw you off. All that spice is going up against coconut milk and the nut paste.

It’s almost too much. Almost. Right on the edge of completely over the top. Which is what I like. This is not an austere dish.

The tang of the tamarind paste counters it. Brings things back into balance. The yang. It just works.

Roast your eggplant for bagara baingan

This is another place I’m drifting from tradition. I’m a fan of the meaty taste that comes from roasting those little Indian eggplants.

Fried is good too. Don’t get me wrong. But I really like roasted. It’s way less mess. And your house doesn’t wind up smelling like a greasy spoon. It will still smell like an Indian restaurant though. I can’t help you there.

It’s worth looking for those Indian eggplants. The skin to flesh ratio is perfect for bagara baingan.

Look for them at Asian or Indian grocers. I even see them at regular grocery stores sometimes.

Watch for signs that say brinjal. Or ratna. If you’re shopping at an Indian grocer anyway.

Or look for signs that say adorable little eggplants at the regular grocery store. No. Not really.

There’s a trick to making it work. When roasted eggplant comes out of the oven the skin is tough. Not the best.

But if you put it in a Tupperware and seal the lid for 15 minutes right when it comes out of the oven it softens up nicely. Good trick for any roasted eggplant dish.

It’s an important trick. Because the skin is a big part of this dish. It would just be a bunch of eggplant smush without it. Maybe the best eggplant smush I’ve ever made but not what I’m going for here.

This one is for the real Indian food fans

This one is for food lovers. Most of the recipes here are. But this one is especially so. This isn’t for the “I only eat butter chicken” crowd.

It’s not for the “I only ever order the same dish every time” types. It could be. But it’s probably not.

I know I’m not selling it. Working against myself really. But this is Indian for Indian food lovers.

It may not be what you know. Might be outside your comfort zone. But there is a whole world of wonder waiting for those who dare. And this could be your first step… 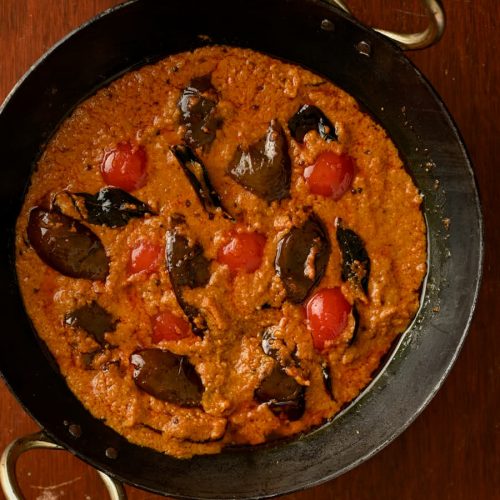 Make your Indian hotel gravy ahead of time. You can freeze it in portions and make curries whenever you feel like it. As long as you are getting serious about your Indian cooking think about making your own garlic ginger paste. It makes a big difference.