Hello? It’s the 1950s calling. Interested in a one pot roast chicken dinner? No? Are you sure? It’s Bombay chicken. Yes? You would? Right. Thought so.

One pot roast chicken dinner. Like the 1950s. But a whole lot better. Because it’s Indian-ish.

They didn’t have it all that wrong back then. Chicken and potatoes. Roasted together.

Tasty stuff. A bit tricky to get both done at exactly the same time. But tasty stuff. If you nail it.

With western technique. Roast chicken. Complete with all that wonderful, crispy skin. Kissed with tandoori spices.

Potatoes. Roasted in chicken fat. Not so big in India. Be honest. You know you want it.

And a sauce could be Indian. Almost. Except it has the fond from a roast chicken in it. That’s not so Indian. But it is unbelievably delicious. Culinary gold.

Technically this is not Indian cooking. Not traditional Indian cooking anyway. But so what? Tasty matters. And this is seriously tasty.

Until you start respecting the ingredients. The techniques. My Indian half. Interpreted through the lens of my western half. That is Indian-ish…

The craziest Bombay potatoes ever

Is this the world’s best Bombay chicken? Maybe. Maybe not. That’s a pretty big claim. Are these the best Bombay potatoes ever? That one is possible. Very bold. I know.

But they are crazy delicious. Seriously. Chicken fat roasted potatoes. Crispy outside. Creamy inside. In a lush coconut spinach sauce.

I’m a bit conflicted. Tempted to make this a potato recipe. With a side of roast chicken. A really, really over the top potato recipe.

I say this tongue in cheek. But when I eat these potatoes I forget there’s a roast chicken next to it. So I’m only sort of kidding.

They really are that good. I’m actually kind of shocked how much I love them. Don’t get me wrong. The chicken is great. But for me… The potatoes steal the show.

Bombay chicken is a one pot meal

There aren’t a lot of one pot meals on glebekitchen. I would have to look carefully to be sure. Bombay chicken could be the first.

Except this isn’t quite a one pot meal. It’s almost one pot. You have to par-boil the potatoes.

Washing a pot that boiled water is not hard. So it’s as close to a one pot meal as you are going to get. Here anyway.

And you could par-boil the potatoes in the skillet before you roast the chicken. So you can make this a truly one pot dish.

That would add about 20 minutes to the cooking time. Inefficient. I’m not doing it. You can though. If you really want a truly one pot meal.

It’s mostly all about one pot. Roast the chicken and potatoes. Remove. Make the sauce in the same pot. Wilt the spinach in the sauce.

You could even carve it up and serve it family style in the pot. Would be a fun presentation. Just let the pot cool a bit first. Wish I’d done a picture like that…

And yes. I know. A skillet is a pan. Not a pot. So almost one pan. Bombay chicken is an almost one pan dinner. That’s the reality. Sadly, that doesn’t roll off the tongue as well.

Not all tandoori masalas are created equal

Pay attention to this. It’s important. Really important. Fundamental even. If I had a way to make the title of this paragraph red I would.

There are a lot of tandoori masalas out there. There’s five different brands at my Indian grocer. At least. I haven’t really looked that hard. Might be more.

They are all made to season chicken. Like slap it on and go. Mix the tandoori masala with some oil. Some yoghurt maybe. Toss it on the barbecue. Enjoy.

Stop and think about that for a second. Good to go. Straight out of the package. Add nothing else. That means it already includes salt. A lot of salt.

A good amount of that salt winds up falling off the chicken as you grill. What’s left on the chicken is really tasty. It all works well. Like it’s supposed to.

Where it doesn’t work so well is as ingredient in a dish. It’s salt creep. And it can be major salt creep. Some are up to 50% salt.

That’s a lot. Enough to seriously kill this dish. Just. Not. Good. Be very careful. Look at the ingredient list.

That’s why I make this dish using homemade tandoori masala. I control the salt. Safer that way.

You’ve been warned. Don’t leave comments complaining about this being too salty. If you think that then you’ve done it to yourself…

Use your convection oven – if you have one

Air fryers. That’s all anyone talks about these days. Unbelievable technology. The greatest thing ever invented.

Except it’s been around for years. Many years. New form factor. Old technology. Sorry if I’ve burst your bubble.

A fan. An element. Forced air in an enclosed, heated space. Does that sound familiar? It should. An air fryer is a little convection oven.

Push the button. Turn the dial. If you have a convection oven please use it. For Bombay chicken. And everything else. I do. Always.

Bombay chicken is a figment of my imagination

Here’s the thing. There’s no such thing as Bombay chicken. Not that I can find anyway. A few recipes out there. With nothing in common. Except the chicken.

So I feel pretty good calling this Bombay chicken. Just another random recipe with the same catchy name. And some glebekitchen thinking.

Like roast chicken? Tandoori spicing? Potatoes cooked in chicken drippings? And a coconut curry sauce? Yes? Make this. You won’t be disappointed.

That’s bold. Even for me. But I really, really like this one. So I’m taking a chance you will too. If you like it let the 1950s know what you think… 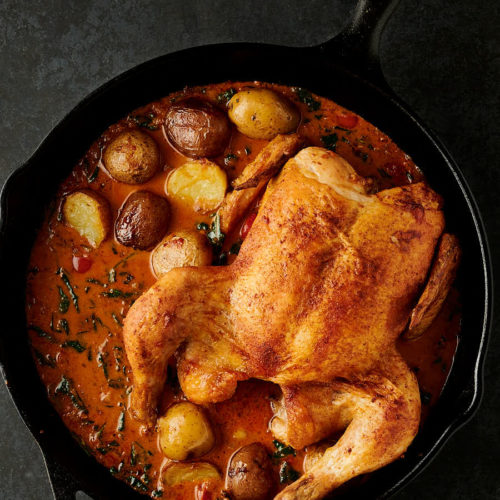 This recipe was developed using the glebekitchen tandoori masala. You can use a commercial tandoori masala for this recipe but watch the salt. Some brands are up to 50 percent salt. This dish will be inedible if you use a brand with any appreciable amount of salt. Just be careful…