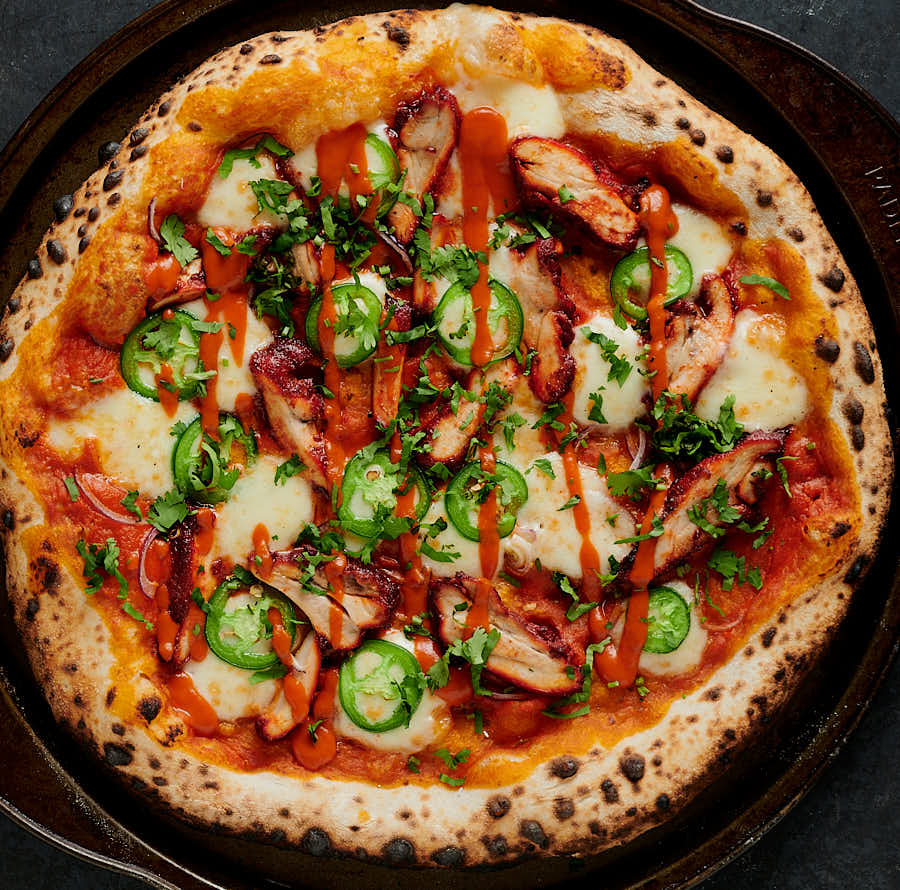 Be happy. It’s amazing. And you can make it. Desi pizza. It’s a thing.

My name is Romain and I have a problem

I’m a pizza junkie. Obsessed. I make my own dough. Takes two days.

I’ve had a pizza oven for 15 years. Way before there were Oonis. Or Roccboxes. Or whatever the latest oven is.

I think the crust is more important than the toppings. Yes. For real. It’s all about the crust.

I have spent more than a decade working on my crust. I’ll spend the next decade trying to perfect it.

And I know I’ll never get there. It’s a journey. The destination does not matter.

It’s a bit crazy. I know. But it’s a happy crazy. If you are nodding your head as you read this I think we can be friends.

Indian pizza is full on amazing

Never thought I’d say the words. It’s blasphemy. I know. They are coming for my Neapolitan pizza card. I’ll be OK though. It was an imaginary card anyway.

Could be a phase. Don’t know. But I don’t think so. I may go back to traditional pizza. Eventually.

But I won’t stop making Indian pizza. Not ever. It is just that good.

Everything matters in butter chicken pizza

There’s not a lot to pizza. At the surface. Dig a little deeper and it gets as complex as you want it to be.

It’s simple conceptually. That’s the magic. And the danger. There’s nowhere to hide. Everything has to be perfect. The crust. The sauce. The toppings. The fire.

So I thought. Why not make it even harder? And I came up with this. Butter chicken pizza is not a simple pizza. It’s like making dinner twice.

The sauce is important. It’s always important. But it’s really important here. Sets the tone. Brings the whole thing together. Without it this is chicken pizza.

And then there’s the crust. The crust defines the pizza.

Great crust. Great toppings. I think you can figure out what that makes. I call that pizza nirvana.

There are no onions in butter chicken

That’s a tough one for people to get their heads around. There are no onions in the butter chicken you love. Trust me. I’ve done the research.

There are onions in almost everything Indian. But not butter chicken. Except maybe at takeaways. Restaurant style.

But even that’s not guaranteed. Lots of better restaurants are making their butter chicken without onions. It’s a thing. Another thing.

I’m about to suck and blow here. No onions in butter chicken. I’m bought into that. Absolutely. Except for this pizza.

I love red onion on desi pizza. And butter chicken pizza is no exception. So I add thinly sliced red onions. It’s wrong. But it’s so right.

You don’t have to do it though. Don’t let me drag you down.

The butter chicken in this pizza has no butter. No cream. And no cashews.

No cashews because I’m allergic. That’s the reason I have to leave them out. You can add some raw cashews into the pot along with the tomatoes. A half cup is about right.

No butter or cream is intentional. It’s all about balance.

The cheese stands in. Rounds things out. Brings balance. Cream and butter would drag the flavour down. So I leave it out.

I prefer fresh mozzarella for butter chicken pizza. Fior di latte. I like the balance. The way the cheese doesn’t cover the whole pizza.

But it works with regular mozzarella too. A little different. But good. It’s really, really hard to wrong with desi pizza.

Pick the dough that’s right for you

I have a recipe for pizza dough here on Glebekitchen. Takes two days to make. It’s the best I can do. It’s made for high temperature ovens. 750F plus.

But it isn’t great in a conventional oven. I’ve tried it. 500F. Not something I would serve. Comes out pasty white. And a bit crunchy. Like a giant cracker. Don’t try it that way. It doesn’t work. I promise.

The key thing is to make the dough that works for you. The one that suits the oven you are using.

Have a pizza oven? You probably have a favourite dough. Use that. Or try a 2 day room temperature glebekitchen pizza dough. It’s a game changer.

I’m sounding like a pizza snob here. Which is understandable. I am a pizza snob. But I’m not pizza elitist. Everyone should make great pizza. Whatever oven they have.

You can use this recipe to make butter chicken too

This is a stripped down version of my full blown posh restaurant butter chicken. Tweaked for pizza. But it makes a pretty convincing butter chicken as well.

Make the sauce. Make the tikka. Toss the tikka into the sauce. Bring to a simmer and cook until the chicken is heated through.

If you make too much for pizza just make butter chicken. Nobody will complain. I promise.

It’s time to get into desi pizza

Love pizza? Love Indian food? They are magic together. I’m not a fan of fusion. Not usually. But this is the stuff of legends.

Desi pizza is a thing. For good reason. It may not be everywhere. Not yet anyway. But it is coming. And I can’t wait.

If you’ve had it you know. And if you haven’t? I think it’s time you fixed that… 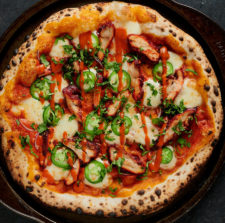 If you can’t find kashmiri chili powder you can use 1/2 tsp cayenne pepper and 2 1/2 tsp paprika.  You can make great tandoori masala at home. But you’ll have to go to an Indian grocer I bet…