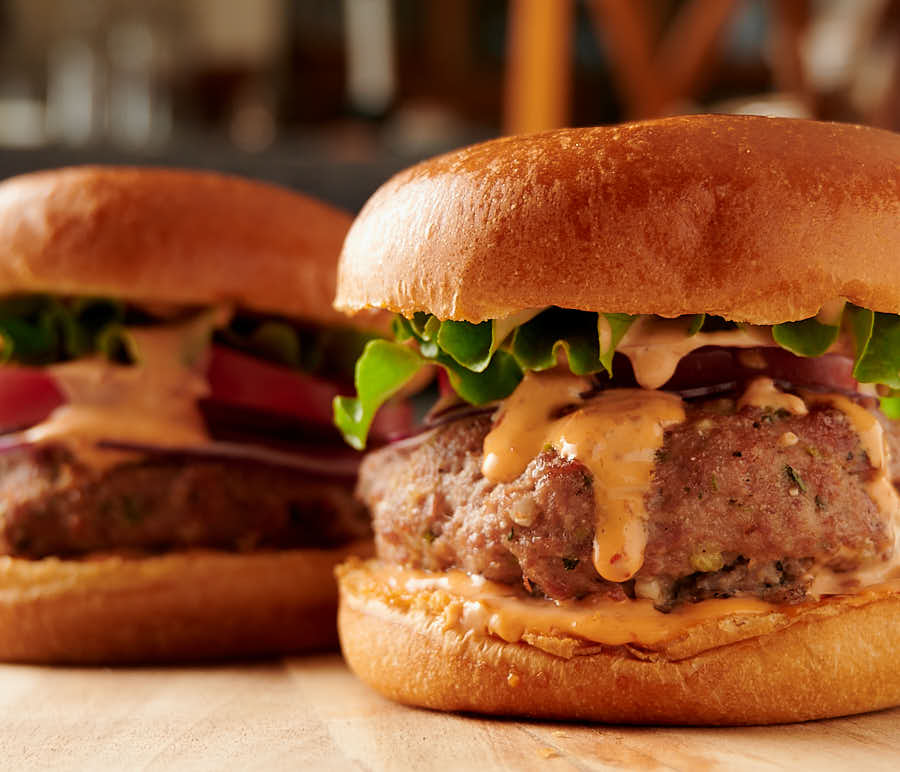 Delicious on a Tuesday. Worthy of a casual dinner with friends. And easy. Thai turkey burgers. A real crowd pleaser.

In a healthy sort of way. Any night of the week. Nothing not to love here.

Some green chilies. A little shallot. Garlic. Cilantro. And fish sauce. There has to be fish sauce.

On a bun. With a spicy kewpie mayo burger sauce.

A little lettuce. Some tomato. A few strands of red onions. This one gets my diabolically simple badge.

Sometimes you just get lucky

Every now and then I just fall into a recipe. Without trying. Without thinking even. This is one of those times. It just happened.

Tuesday night. Nothing in the fridge. Indian-ish lamb burgers on the brain.

Lots of ground turkey though. Which makes sense. To me anyway. Who actually wants ground turkey? Turns out I do. But I’m getting ahead of myself.

I decided to try. Wasn’t happy about it. Grabbed the turkey. Some brioche buns. And went home without a plan. Sometimes you just need to eat. Can’t always be great.

I wasn’t expecting this. Not even a little bit. Don’t think I’ve cooked ground turkey in 10 years. My bad.

Third bite. “This is really good. I’m going to have to remember this one.”

Fifth bite. “I’m actually thinking this might be glebekitchen worthy.”

Last bite. “This one is a keeper! I’m doing a Thai turkey burgers blog post.”

This isn’t really Thai. But I have to call it something. Don’t have a better name. Could be Asian turkey burgers. Southeast Asian maybe?

But it could be Thai. If turkey burgers were a thing in Thailand.

That’s the beauty of making stuff up. Freedom to name it. It’s a bit ridiculous I suppose. But food is supposed to be fun. So I’m not super worried about it.

The burger sauce though. Not Thai. Or Vietnamese. It’s a Japanese Indonesian love child.

Turkey isn’t big in Thailand either. You can call me out on that. If you have nothing better to do I guess. But I’ve already said it. So why bother?

I’m kidding. Call me out if you want. I made this up. I called it Thai turkey burgers.

It’s culinary fiction. Rolls of the tongue better than Japan-Indonesian south-east Asian turkey burgers. So I’m going with it.

I get why you might. The name is bad. Mmm… fish sauce. Clearly nobody asked marketing what to call it.

It doesn’t smell great. Kind of nasty actually. Not something you want to put on your ice cream.

It doesn’t even taste good. Straight up anyway. I’ve done fish sauce tastings. Some are better than others. But I’m not rushing to do another tasting any time soon.

That’s not exactly true. I do understand it. In theory anyway.

Fish sauce is high in glutamates. Glutamates are culinary gold. Key part of umami. Somehow the brain knows. Even when the nose says no. Absolutely fascinating.

It’s also a safe bet you’ve had it. Probably loved it even.

Have you ever eaten at a Thai or Vietnamese restaurant? Yes?

Yes to the first question? You’ve had fish sauce. That’s almost guaranteed. And if you liked the food then you like fish sauce.

Ground turkey is wet. Really wet. Add some fish sauce and it’s too wet to handle. Near impossible to get onto the grill.

I did it the first time. Had to carefully slide the patties from the plate onto the grill. It wasn’t easy. Not at all.

So I made one change from my original Tuesday night epiphany. To make it a little easier to handle. A trick I learned making bun cha.

Remove the rice from the pan. Let it cool. Grind. I like my spice grinder for this. You could use a mortar and pestle. If you want a workout. I don’t. So I use a grinder.

It doesn’t just make things more manageable. It adds a bit of texture. A hint of flavour. I like it in bun cha. And I like it here.

It isn’t absolutely essential. You can leave it out. If you are really careful with your patties. I’m serious. You have to be really, really careful.

Don’t come crying if you leave it out. And your burgers self destruct. You’ve been warned. Toasted rice powder makes this recipe way easier.

The company with the golden arches has their special sauce. I have mine. Mine is better. I’m just going to call it. And it’s magic. That’s way better than special.

Mine has only two ingredients. Sambal oelek. And kewpie mayo. Might take a little hunting to find them. But they are around.

Sambal oelek is a staple in my house. Indonesian chili sauce. Amazing stuff. Sambal oelek needs to be in your fridge. It is just that good. And it lasts forever.

Kewpie mayo is Japanese mayonnaise. It is not the same as Hellmann’s. Not a subtle difference either. Another good one for your fridge.

Kewpie mayo isn’t cheap. But it is special. Magic even. I think it’s worth the splurge. Try it once to see for yourself.

It’s in major grocery stores here. Ask. You may be pleasantly surprised. Worst case pretty much any Asian grocer will have it.

Pork works in this recipe. Really well. And it is more believable. Thai pork burgers. That could actually exist. Somewhere.

Bankok is a big place. With a lot of street food. I bet somebody must be making it.

It works for all the reasons pork works in Thai cuisine. Or whatever part of Southeast Asia is right for this recipe.

Not so far from bun cha really. In burger form.

And I googled bun cha burger. There is a place in Hanoi. So maybe I’ll do a post on Vietnamese pork burgers.

And FWIW I think the guy in Hanoi is a genius.

And yet here it is. I’m still scratching my head a bit. Somehow it works. Works well even. Pretty happy to have fallen into this one.

Easy enough for a Tuesday night. Delicious. Semi-healthy. And pretty inexpensive. That’s a winner in my books. Hopefully it’s a winner in your books too. 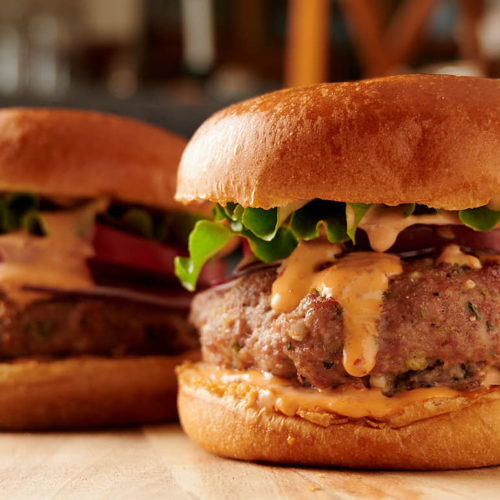 Print Pin
No ratings yet

Toasted rice powder is exactly what it sounds like. Take about 1/2 cup of jasmine rice. Toss it into a large dry skillet over medium heat (you want to try to get the rice in a one grain layer). Toss every 15-20 seconds or so. Dry roast the rice until it gets to be a light golden colour. Takes me about 10 minutes. Your stove is different so go for colour. Let it cool and grind in a spice grinder.