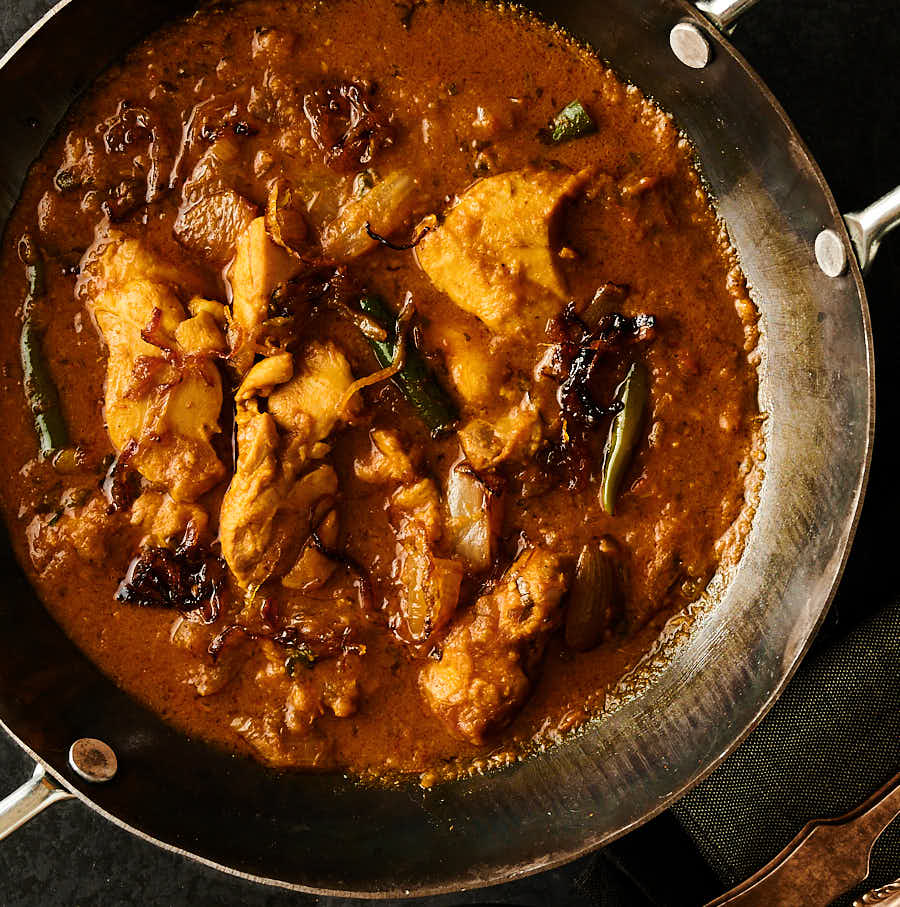 Chicken dopiaza. Hotel style. This is something you know. Might even be a favourite. But not quite how you might be expecting. This dopiaza brings seriously big flavours.

Onions. Spices. Green chilies. Chicken. Simple really. Nothing unusual. Until you add hotel style gravy. That makes it special. Kicks it up a notch.

The big chunks of fried onion and the fried onion garnish don’t hurt either. Lots to love here.

Not exactly restaurant style. Close. Really close. But tastier. The way you wish restaurants served it. Flavours that make your taste buds sit up and take notice.

Think about curries you’ve eaten at your favourite Indian restaurant. Now imagine you could do better. That you could get deeper flavours. That’s hotel style.

The same lush sauces you get in restaurants. But with all the wonderful flavours that you get with traditional Indian cooking. It’s a little bit of curry magic.

This is how they do it in Indian hotels. And really posh restaurants. Cooked to order. But true to tradition.

No idea what I’m talking about? You can fix that. Easy. Just make this chicken dopiaza. You’ll get it. And you’ll never look back.

Chicken dopiaza is an ancient dish

There are famous Indian dishes that have nothing to do with India. Dishes with Indian sounding names. That trace their roots to restaurants in the UK. Chicken tikka masala is the classic example.

Chicken Dopiaza isn’t one of those. It’s the real deal. An ancient dish. Been around for centuries. I love that. Traditional Indian goes mainstream.

And there’s even a story. Bit of history. Maybe “history” is a stretch. Myth maybe? It goes back to the Moghuls. There’s even an emperor in the tale.

Once upon a time – so the fable goes – a cook in the imperial kitchen screwed up. Somehow added too many onions to a dish. Big mistake. Lucky for that cook, the emperor liked it.

So the cook didn’t get fired. Or whatever the penalty was for too many onions back then.

The cook’s name was Do Piaza.

That’s the story. But dopiaza also sounds a lot like do pyaaj. Which means two onions in Hindi.

It all seems a little too cute to me. But that’s the story. I didn’t make it up.

My spidey senses are tingling a bit. Think about it. A guy who’s name is two onions adds too many onions to a curry for an emperor. And then gets a dish named after him.

Yo. Emperor here. Mr. Two Onions – you put too many onions in this dish. But I like it. So I’m going to name it after you.

Four onions in this chicken dopiaza

Technically this isn’t a dopiaza. There are onions in the hotel style gravy. Lots of onions. Beautiful, deeply-browned onions.

There’s finely chopped onions in the chicken dopiaza. A little flavour boost. And a nice texture.

There’s big chunks of onion. The ones you expect in dopiaza. That satisfying bite of onion that’s fundamental to the dish.

And there’s the crispy fried onion strands to garnish. A little flourish of flavour right at the end. Really pushes it over the top.

The fried onions aren’t essential. But they are a nice touch. A bit of flash if you feel like showing off.

So if dopiaza is two onions this is actually a recipe for chaar pyaaj. Four onions. Or onions four ways.

That does not roll off the tongue. And nobody has a clue what chaar pyaaj is. So I’m calling it dopiaza.

Doesn’t matter what it’s called though. What matters is that it’s seriously tasty stuff. 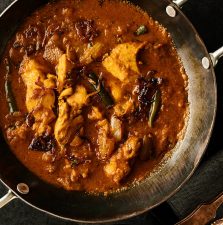 Do your prep (including the onion garnish)

Make your Indian hotel curry gravy ahead of time. It takes time to make so think about doing it the day before. I use this Indian restaurant spice mix in most of my Indian restaurant style curries. For maximum flavour you should consider making your garlic ginger paste from scratch.