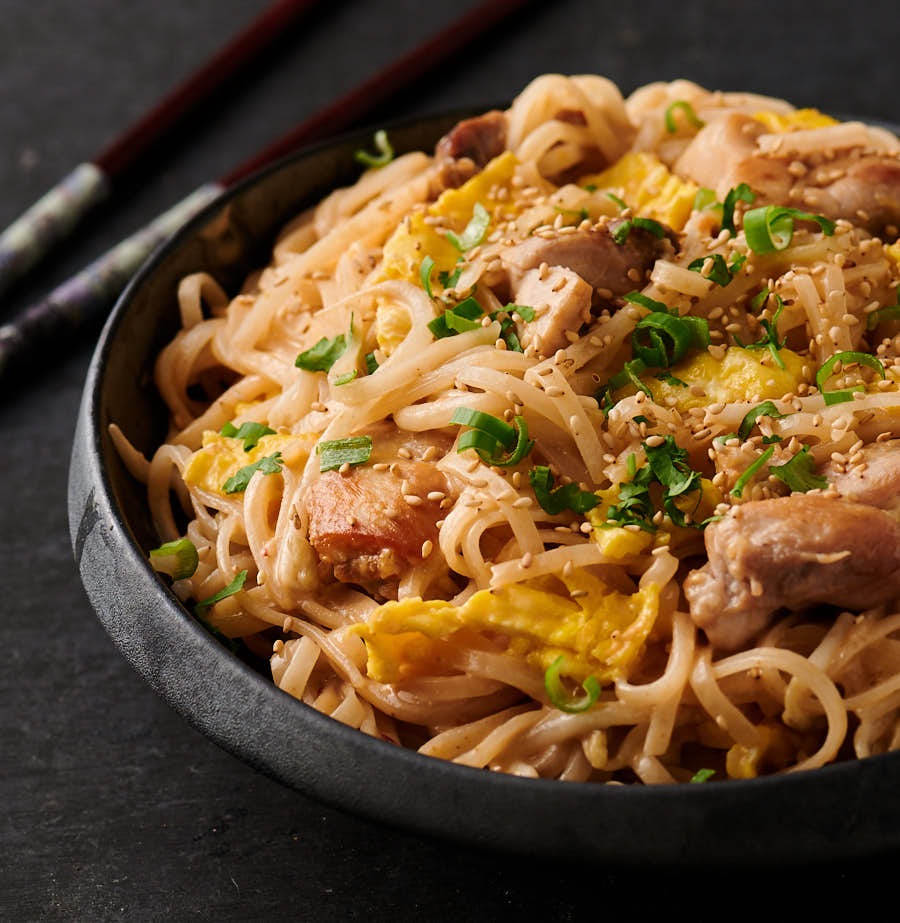 Thai sesame noodles. Think pad Thai with a big boost of sesame flavour. That’s what this is. Sesame sauce. Rice noodles. Chicken. Or shrimp. Or both. Egg. Delicious.

It’s a tasty weeknight dinner that’s good enough to serve friends. Like takeout. But better. Because you made it yourself.

Funny thing where I live. Pad Thai has become Thai sesame noodles. I don’t know what’s going on. But lots of restaurants have jumped on the bandwagon.

I don’t really understand what’s going on. But it’s popular. That’s understandable. It’s really good. Not pad though. By any definition I know. So I’m calling it Thai sesame noodles.

I don’t even know if there’s a real Thai version. Don’t think I’ve ever seen it in a Thai cookbook. Pretty sure Andy Ricker isn’t serving it a Pok Pok. But it’s everywhere here. And I like it.  So I wanted to figure it out.

I started down a path of finely chopping peanuts and sesame seeds. I wanted to make it better than they serve here. More authentic somehow. I was wrong.

It didn’t taste right. It didn’t have the right texture. So I made things easy on myself. Chinese sesame paste. It melts into the sauce. Adds great texture. It just works. Why fight it?

You could substitute tahini here. It would be close. But if you can get to an Asian market then Chinese sesame paste is the way to go.

The sesame seeds in Chinese sesame paste are toasted before they are turned into paste. They go in untoasted in tahini. Makes a difference. It’s worth trying to find the Chinese stuff I think.

Chinese in a Thai dish. A little odd I know. But I don’t think this is actually a real Thai dish. So let’s bend the rules a bit. Live a little…

Make the sauce then make the sesame noodles

At first I was sure I would just make a pad Thai. Toss in some sesame paste. And I’d be done. Wrong again. Not even close.

I played with adding Thai red curry paste. It added some zing. But it started tasting like Thai curry. Which isn’t what I wanted. It was tasty though. Might do a Thai red curry sesame noodle dish some day.

You are making an emulsion here. Look at the pictures. It’s smooth. Cohesive. Take the time to follow the instructions. They work. The order of ingredients and how you mix them in is important.

Not as tricky as mayonnaise. Not even close. But you don’t want lumps. Smooth. Look at the picture. Like whipping cream.

This recipe is written like someone in a stall by the side of the road would make it. On a blazing hot day at lunch. You point. You mime eating. Some guy who doesn’t speak a word of whatever language you do holds up a finger. One order or two?

There’s an easier way. And I’m only going to put this tip here. I’m leaving it out of the recipe. So all those people who didn’t take the time to read this are never going to know. But you will.

It’s tricky cooking the omelette in the pan with the noodles. You have to be fast. If you want everything perfect cook the eggs in a separate pan while the chicken cooks. Make an omelette on the side.

Take the cooked omelette and flip it out onto a cutting board. Slice it into ribbons. Toss them in when you add the bean sprouts. Perfect eggs. Easier. Maybe not as cool. But easier. Now you know.

How to get the perfect rice noodle texture

Rice noodles are delicate. The go from perfect to mush in a flash. I’ve done it. I’m guessing you have as well. Everybody learns at some point.

What I’ve learned is when you are frying rice noodles you just need to soak them in really hot water. You want them softened but not anywhere near done.

Pliable. That’s the key. Still toothy. Not more than 30 minutes. And not boiling water.

Think about it. You are frying noodles. And then adding a wet sauce. Heating that through. All these things cook rice noodles.

So if you start with perfectly done rice noodles you are going to wind up with mush. Don’t do it. Just soak and go. It’s less mess. It works better. There’s no reason to do otherwise.

This is street food style

So be ready. Have your sauce made. Noodles soaked and drained. Garnishes prepped and handy. Everything at hand. Mise en place.

And then go. Heat the pan. Add some oil. Some bits of chicken. A little garlic. Toss in the noodles. Scramble an egg. Toss in some bean sprouts. Add the sauce. Garnish. Serve.

Just like that. Literally around 10 minutes from start to finish. And most of that is cooking the chicken. Please make sure everything is ready to go before you start. It will end badly if you don’t.

This is great food fast. Weeknight food. Better than takeout. Thai sesame noodles. If you like rice noodles half as much as I do try this dish. 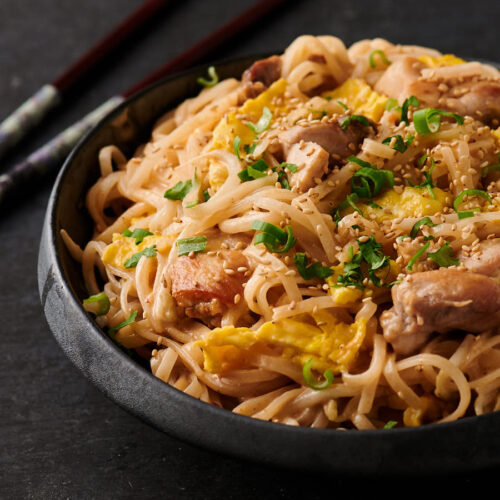 If you can’t get Maggi Tamarina you can use a tamarind paste and a bit of sugar. If you can’t get any tamarind sauce or paste add a second tablespoon of rice wine vinegar and a teaspoon of sugar. Not the same but still good. Don’t try to double this recipe. There will be too much stuff in the pan otherwise. You won’t be happy with the results. If you want to serve 4 make it twice. If you want shrimp instead of chicken my best advice is to pre-cook the shrimp and add it in with the bean sprouts. That’s what I do. Always. If you want to nail cooked shrimp every time check out perfect shrimp cocktail. If you don’t want to go that route then toss them in the pan at the same time the directions tell you to add the chicken. Cook them until they just turn pink and then follow the recipe from there.